The Senate is possibly days from passing an amendment to the Defense Authorization Bill that matches one just passed by the House, which creates a “Trojan Horse”-like repeal of the Pentagon’s ban on homosexuals serving openly in the military. 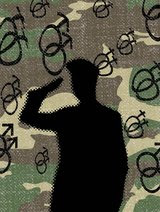 If that amendment becomes law it remains on hold until a to-be-published Pentagon study based on a biased and just-released survey triggers a rigged certification process. The certified report will automatically lift the military’s longstanding gay ban.

“Trojan Horse” is a term for something intended to subvert by deceptive means. Its etymology is traced to the ancient Greeks who gave a giant wooden horse secretly filled with soldiers as a peace offering which the Trojans brought into Troy. The soldiers emerged from the horse to open Troy’s gates to Greece’s conquering army.

The congressional Democrats’ “Trojan Horse”-like amendment is part of a stratagem launched by Obama in his 2010 State of the Union address to repeal the gay ban.

“I will work with Congress and our military to finally repeal the law that denies gay Americans the right to serve,” Obama said. The following week Defense Secretary Robert Gates testified, “We have received our orders from the commander in chief, and we are moving out accordingly.”

On March 2, Gates formed the Pentagon’s Comprehensive Review Working Group (CRWG) to “consider how best to implement a repeal” of 10 U.S.C. § 654, the ‘Policy Concerning Homosexuality in the Armed Forces,’ which is often confused with the Pentagon’s implementing regulation known as “Don’t Ask, Don’t Tell.”

Gates directed the CRWG to “examine the issues associated with repeal” and develop “an implementation plan that addresses the impacts” by December 1. Most importantly he wrote, “I believe it essential that the working group systematically engage the force.”

While the CRWG prepared to “engage the force” through focus groups, a confidential comment website and surveys, the Democratic-dominated Congress realized that waiting until December for the CRWG’s report before acting to repeal the ban could prove politically disastrous. Polls predicting the possibility pro-ban Republicans will take back the House this November would dash the Democrats’ repeal hopes.

Realizing a political tsunami was coming, Sen. Carl Levin (D.-Mich.), the chairman of the Armed Services Committee, floated the idea of introducing an amendment to the Defense Authorization Bill to repeal the ban. That idea gained momentum in April but drew criticism from Secretary Gates who asked the Democrats to wait for the CRWG’s report before taking action.

But in late May anxious gay activists gathered at the White House to craft their “Trojan Horse” amendment. Rep. Patrick Murphy (D.-Pa.) attached that amendment to the Defense Authorization Bill, which was passed by the House along party-lines on May 27. The bill passed even though the four chiefs of the military services asked Congress to wait for the December report and in defiance of the American people.

A May 2010 Zogby interactive poll found that 59% of likely voters want our military leaders to make the decision about the homosexual ban as opposed to 23% who favored Congress. Our constitutional form of government gives the responsibility for such decisions to Congress but legislators shouldn’t ignore the advice of the military chiefs.

Murphy’s amendment links the repeal of the ban to the CRWG’s December report. The legislation requires certification of the report by Secretary Gates, Adm. Mike Mullen, chairman of the Joint Chiefs, and the President that it is “consistent with military readiness, military effectiveness, unit cohesion and recruiting” and once the Pentagon “has prepared the necessary policies and regulations to implement its repeal.” Once certified, the ban becomes history.

Obama is anxious to sign legislation that includes the repeal. It’s also certain that once Gates’ report is delivered the President and Adm. Mullen, who already expressed his support for lifting the ban, will join the secretary in certifying the report no matter what the CRWG finds. Of course, the CRWG’s report will favor repeal which makes it part of the deceptive “Trojan Horse” strategy.

The CRWG’s charter is clearly biased because Gates forbids the group from exploring whether repeal of the gay ban is appropriate for the armed forces. That explains the flawed, pro-repeal survey just released which will play a significant role in formulating the CRWG’s final report.

Last week a defense contractor, Westat of Rockville, Md., e-mailed the CRWG’s survey to 200,000 active duty and 200,000 reserve personnel. The survey was not released to the public because as a Pentagon spokeswoman said, “We want the service members to have the opportunity to open it and read it before they read it in the press.” But on July 9, the Palm Center, a pro-gay group in California, posted the survey on its website.

The survey fails to ask service members whether the homosexual ban should be repealed and doesn’t explore the many consequences of lifting the ban. I advised the Pentagon’s 1993 Military Working Group that drafted the current ban. That group’s report recommended against lifting the ban based on many significant consequences: impact on cohesion, combat effectiveness, privacy, medical, recruiting, retention, and family issues.

The CRWG’s survey measures some of these consequences but completely ignores others affecting morality and the impact on chaplains.

The survey assumes military respondents understand terms like morale, personal readiness, motivation, combat effectiveness, and homosexuality. Providing definitions would have helped and using illustrations or describing behaviors would have been a superior approach. Also, there’s no mention of relevant U.S. government research on homosexual practices such as a report indicating 71% of all American males living with HIV/AIDS infections are “men who have sex with men.”

Respondents are not asked to identify whether they are homosexual or heterosexual, which is a major shortfall. Some survey questions suggest there are gays serving in the military without offering a shred of evidence to support that view. Then the survey asks respondents whether those perceived homosexuals impact undefined unit morale, motivation, readiness, and unit performance.

The questions are stated in such a manner that responses can easily be manipulated to paint a picture that open homosexuality — which is not defined — is a neutral factor. For example, the survey asks respondents to identify the “top three factors that enable you to fulfill your mission during combat?”

“Having only heterosexual members in the unit” is one of thirteen choices. But respondents unfamiliar with the potential damaging impact of open homosexuality on combat would unlikely select that factor from among a list that includes technical capabilities, unit morale, clear objectives, and officers who lead by example.

The CRWG is doing what its political masters directed — chart a path for repeal and figure out how to mitigate the inevitable consequences. The new survey and likely the one scheduled for release to 150,000 military spouses next month are purposely prejudiced by politically correct guidance that ignores contradictory evidence.

The American people should insist the President and Congress stop playing politics with the armed forces. The pending “Trojan Horse” amendment should be withdrawn and the CRWG should be disbanded or redirected to conduct an unbiased study.

KNIGHT: Defending the military while they defend us - The Washington Times