North Korea uses atomic weapons tests, long-range missile launches, weapons proliferation, and attacks against its neighbor to extort inducements. It is time to break that extortion cycle with real consequences before Pyongyang makes another major provocation, especially now as the regime is preparing to change leaders. 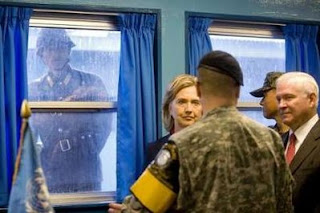 Sixty years ago North Korea invaded South Korea, never expecting the West to come to Seoul’s aid. That provocation led to the Korean War with an estimated 2.5 million lives lost. Today the 1953 armistice that put the war on hold is cracking and the situation is “highly precarious,” according to Secretary of State Hillary Clinton, who warns of the real risk of escalation.

Warnings that the security situation could spin out of control come in the wake of the March sinking of the South Korean warship Cheonan, killing 46 sailors. An international investigation found North Korea culpable but the ever politically correct United Nations refused to publicly finger North Korea in spite of strong evidence.

But North Korea has never paid a price for state-sponsored violence since the Korean War. In 1968, North Korean commandos staged a raid on Seoul’s presidential palace in an attempt to assassinate the country’s president and days later Pyongyang’s navy seized the American spy vessel the USS Pueblo.

Pyongyang’s behavior has taken on a decidedly international flavor over the last 15 years that directly threatens America. The regime startled the world by launching long-range ballistic missiles across Japan in 1998, 2006, and 2009. The 2009 missile flew 2,200 miles and was declared a satellite launch attempt. Washington is concerned Pyongyang’s intercontinental ballistic missiles will inevitably target America with atomic weapons. North Korea already has atomic devices thanks to the Russians and the regime uses its nuclear program to extort concessions.

In 1985, the Soviet Union pressured North Korea to sign the Non-Proliferation Treaty (NPT), pledging not to employ its nuclear facilities to create weapons. But by the early 1990s Pyongyang built a plutonium reactor near the city of Yongbyon and threatened to withdraw from NPT monitoring.

The U.S. confronted Pyongyang about its suspected atomic weapons program which led to a concession deal known as the Agreed Framework. Pyongyang promised to dismantle its nuclear facilities in exchange for light water-reactors and other inducements like fuel oil, food and political concessions.

South Korea piled on the inducements under its so-called “sunshine policy” to improve relations with the North. It shipped food, provided financial aid, and constructed more than 100 factories in the North Korean city of Kaesong.

But the Agreed Framework and “sunshine policy” crumbled after the Bush administration found the regime continued to pursue nuclear weapons. Then in January 2002, President Bush lumped North Korea, along with Iraq and Iran, in a rhetorical “axis of evil.” But the Bush Administration didn’t give up on inducements. It proposed a “bold approach” suggesting wide-ranging arms control by North Korea in return for even more concessions.

Those talks fell apart in 2005 after the Hermit Kingdom declared it had nuclear weapons “for self-defense.” A year later the rogue tested an atomic device and a second in 2009. Today it claims to have enough plutonium for six to eight nuclear weapons and is enriching uranium like Iran for use in atomic weapons as well.

Pyongyang is also in the business of proliferating dangerous technologies with limited adverse consequences. A 2010 UN report claims Pyongyang has exported nuclear and missile technology to Iran, Syria and Myanmar. In 2007, for example, a North Korean-built plutonium reactor in the Syrian desert was destroyed by Israeli fighters. North Korean scientists are also in Iran working on missile and nuclear programs and there are press reports regarding suspected North Korean nuclear material shipments to Myanmar, another rogue regime.

Recently, North Korea ratcheted-up tensions by declaring it “will not be bound” by the armistice that ended fighting in the Korean War. That declaration plus the aforementioned provocations, proliferation business, and Pyongyang’s constant war-like bravado are part of the regime’s leader succession strategy.

North Korean leader Kim Jong Il, 69, reportedly had a stroke in 2008 and has only a short time to live. His youngest of three sons, 27-year-old Kim Jong Un, is the father’s choice to succeed him.

The regime is preparing Kim Jong Un for succession by bolstering his credentials. Last year, Kim Jong Un was secretly appointed to the legislature, a step for Communists to rise in the party structure.

Recently the regime launched a propaganda campaign to bolster the young leader’s credentials and two weeks ago the North’s official news agency announced the convening of a Workers’ Party of Korea Convention in September. The convention will be the first such meeting in three decades to select the eight most senior officials who, together with Kim Jong Il, comprise the Central Committee. The speculation is the occasion will be used to designate Kim Jong Un as the heir to the dictatorship.

But the most important piece of the succession strategy is giving the son military credibility, even though he never served. This was done for his father by creating a record with military exploits, such as the 1968 capture of the USS Pueblo. Soon Kim was called “the respected and beloved general.” A similar scenario appears to be emerging for Kim Jong Un who may be identified as the great hero who sunk the South Korean warship.

A change in Pyongyang’s leadership provides an opportunity to reassess our North Korea policy. We should expect the regime’s new leader to be much like his father but our policy doesn’t have to remain the same. Rather than a policy of appeasement, we need a policy that harshly responds to North Korean bullying, prevents it from proliferating dangerous technologies, and eliminates its atomic-tipped missile arsenal.

First South Korea, with American backing and assistance, should adopt a tit-for-tat policy, much as the Israelis strike back every time Arabs launch rockets and suicide bombers at Jewish people. Bullies like Pyongyang understand force and it is past time South Korea responds in kind to every provocation.

Second, America must prevent Pyongyang from proliferating weapons of mass destruction. The U.S. and its allies must interdict North Korean shipments that appear to be transferring dangerous technologies. Expect Pyongyang to threaten retaliation for boarding its ships but the alternative — the spread of dangerous weapons — is a far worse outcome. The regime wants to survive and will not risk all-out war with the U.S. if we press the point.

Finally, North Korean long-range missiles and atomic weapons threaten our homeland and many of our allies, such as Japan, in the region. The Obama Administration must warn the regime that this threat is unacceptable and that it will be removed by military action unless North Korea ceases their pursuit of nuclear weapons.

North Korea will inevitably launch another military provocation. Only this time it could come as an atomic-tipped missile landing in Seoul, Tokyo or Los Angeles. That’s why it is time to break the extortion cycle with real consequences and there’s no better time than now with the turn-over of leadership in Pyongyang.