In a recent Prophecy Update Radio interview with White House correspondent Bill Koenig of World Watch Daily News, he informed me “The word around Washington is November could be critical for the Mideast”. I understood his comment, in part; to mean Republican dominated victories could accelerate the plans of Israel's enemies to attack the Jewish State.

Presently, Israel’s Arab and Persian (Iranian) enemies are observably seizing the opportunity to stockpile their arsenals with lethal weapons under Obama's watch. However, they must also be concerned about potential November 2010 Republican victories that could bring about a transition in America’s political disposition toward Israel. Currently the consensus among many Middle East Jews and Arabs is that Obama is militarily soft and inept at brokering peace in the region.

Additionally, there is a noticeable schism developing between Israeli Prime Minister Benjamin Netanyahu and President Obama. The Obama administration has recently implemented what some are calling a “Charm Offensive” toward Israel in an attempt to ease the friction.

However, in a display of flip-flopmanship, Obama recently infuriated Israeli Prime Minister Benjamin Netanyahu by deciding to side with the 188 member nations of the Nuclear Non proliferation Treaty in favor of forcing Israel to “come clean” on its nuclear weapons program. This was a severe change in American policy toward Israel. Former president George W. Bush had vehemently opposed similar proposals during his tenure.

Subsequently, Netanyahu abruptly cancelled his pre-planned visit with Obama in Washington scheduled for June 1, 2010. Netanyahu reportedly excused himself due to the flotilla incident occurring concurrently between Israel and Turkey. However, there is just cause to wonder if there was more to his hasty cancellation than meets the eye. 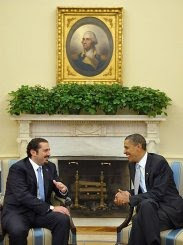 Another evidence of the burden mounting between the two world leaders was recently displayed when Lebanon’s Prime Minister Saad Hariri came to Washington in May of 2010. Obama received Hariri with open diplomatic arms and far more pomp and circumstance than he did Netanyahu during their closed door talks this past March. Many news commentators were surprised at Obama’s apparent snubbing of Netanyahu at the time.

Compounding the Netanyahu-Obama fracture is the fact that Lebanon’s Prime Ministerial post is considered by many to be merely a token political position. Further salting the political wound, Prime Minister Hariri apparently came to pressure Obama’s hand against Israel by warning him of pervasive Arab frustration with the present White House Middle East peace efforts.

Although former President George W. Bush, like his predecessor Bill Clinton, pressured Israel to negotiate land for peace with the Arabs, his “War on Terror” enabled Israel to begin construction of its 403 mile long partition wall which is nearly completed. This wall is credited for the subsequent observable drop in suicide bombings and Palestinian terrorism inside of Israel proper.

Additionally, it enabled the Israeli Defense Forces (I.D.F.) to attack Hamas with little to no U.S. resistance between 12/2008 and 1/2009. The provocation came when Hamas lobbed more Katusha rockets into Israel after a six month cease fire between them which Israel ended in December of 2008. Interestingly, Israel attacked Hamas just prior to Obama's 170 million dollar presidential inauguration. In fact, the I.D.F. pulled out the day before the inauguration as if to offer Obama Israel’s extended hand in friendship by refusing to rain rockets down on Gaza during his parade.

During the 6 month cease fire Israel obviously prepared their intelligence for the coming Pre-Obama Hamas attack called “Operation Cast Lead”. It was apparent in the prompt and decisive victory they achieved. The timing of Israel’s immediate invasion was impeccable. It was as if the I.D.F. anticipated an Obama presidential victory in November 2008 knowing that his inauguration wouldn’t be until January 2009. This provided a brief window to clean house in Gaza. Many Israelis feared the future would be grim for Israel-American relations in the event of an Obama victory at the time. Their legitimate concerns are presently manifesting.

This "curious" timing and duration of Operation Cast Lead suggests that Mideast events closely parallel American elections. Netanyahu's quote in January 2009, before he became Israel's present Prime Minister, still echoes in my mind; "Hamas will have to be dismantled, however, that probably won't occur as a result of Operation Cast Lead". At the time Netanyahu was favored in the polls to be Israel’s next Prime Minister.

Should the Republicans clean house in November, Israel's enemies may move with haste before America has time to organize against any Mideast war. They might be concerned that American Mideast foreign policy could take a dramatic pro-Israel shift. Presently there are far more Republicans than Democrats in both the Senate and Congress that have pro-Israel voting records. Correspondingly, the Obama administration is showing clear signs of desperation when it comes to its role in crafting a Mideast peace solution.

Additionally, be reminded that something as seemingly miniscule as the recent flotilla incident may be all it takes to catalyze a major Mideast conflict. Remember that the 34-day (July 12 to August 14, 2006) Hezbollah-Israel war was sparked by Hezbollah kidnapping two I.D.F. soldiers on July 12, 2006. This conflict resulted in 4000 Hezbollah rockets striking Israeli soil.

Four years later Hassan Nasrallah, claiming that he and his Hezbollah bad boys alone embarrassed the I.D.F., boasted Hezbollah single handedly can destroy one-half of Israel's army! Netanyahu recently declared Hezbollah now has 60,000 more vastly advanced rockets pointed at Israel in direct violation of U.N. Resolution 1701, which calls for the disarming of Hezbollah. Some analysts suggest that Tel Aviv has more rockets per capita targeted at it than any other city in the world.

In my estimation, Israel is waiting for an opportunity to devastate their enemies. It is quite possible that one or more of Israel's enemies is about to shoot themselves in the foot prompting the exceedingly great army of Ezekiel 25:14 and Ez. 37:10 into action against them and their Arab and/or Persian partners. It appears as though the time for Mideast peace has run out.

About 2,300 running for Congress, most in decades - My Way News