Evangelical left activist Jim Wallis of Sojourners has become the virtual house evangelical for the Obama administration. He is the ostensible chieftain of a supposedly populist uprising of social justice religionists whose “biblical principles” demand ever larger Big Government. So, naturally, Wallis is threatened by the Tea Party movement, whose support extends well beyond Wallis’ constituency of liberal clergy and campus activists. 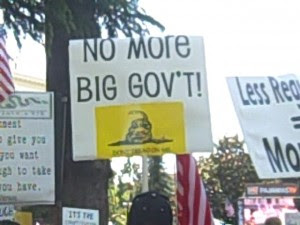 Recently Wallis editorialized against the Tea Partiers from a “Christian” perspective, and invited Sojourners supporters to jump in with their own critique. He also opined against Libertarians, whom he regards as almost interchangeable with Tea Partiers. The sin of both groups, in Wallis’ eyes, is their hostility to Big Government, which Wallis of course equates with God’s Kingdom.

Wallis reluctantly admitted that the biblical Book of Revelation “depicts the state as a totalitarian beast,” but only as a metaphor for ancient Rome. And it may serve as a “clear warning about the abuse of governmental power,” he further granted curtly “But a power-hungry government is clearly an aberration and violation of the proper role of government in protecting its citizens and upholding the demands of fairness and justice.”

Power-hungry governments are an “aberration?” Wallis has been a campus and religious activist for the left for over 40 years but seems blithely unaware of the 20th century’s worst horrors, orchestrated by unlimited government. Hitler’s Holocaust, Stalin’s purges and orchestrated famines, Mao’s own orchestrated purges and murderous Cultural Revolution, Pol Pot’s Cambodian genocide, the Marxist Ethiopian regime’s orchestrated famines, the countless barbarities and mass murders of other post-colonial African dictatorships, not to mention hundreds of thousands killed by North Korea’s communists and by Saddam Hussein’s Baathists, along with many thousands murdered by Vietnam’s and Cuba’s communists. Totalitarianism in the 20th century created a relatively new historical phenomenon: governments without limits murdering millions of their own people in pursuit of utopia. Governments in the 20th century killed more millions of their own peoples than all of that century’s wars and natural famines combined.

Tyranny through an unlimited state was refined in the 20th century, thanks to what Churchill called “perverted science” and the Hegelian/Marxist ideology that demanded that all society yield to state supremacy. But the 20th century did not invent tyranny or uncontrolled government, of course. Tyranny and excessive state power have been the norm for most of human history, typically under kings or other oligarchs, who subsume economic, political, religious, and cultural power unto themselves. The Jewish and Christian tradition has, at its best, struggled against tyranny, arguing for limited governmental powers subject to transcendent law. The ancient Hebrews were originally governed by judges and were permitted kings only grudgingly. There were more wicked than good kings, and even the good kings often behaved badly, with seemingly all the prophets themselves murdered for inveighing against them.

The Early Church acknowledged that God has ordained the state to maintain order. But the Apostles did not attached messianic importance to the civil state. With an intrinsic understanding that all humans were imaged after God with innate dignity, Christianity and Judaism assumed limits on traditional state power, whose pagan forms demanded worship of itself. The Church, at its best, resisted tyranny and defended the weak from the strong, i.e. primarily the state and its friends. Anglo-American proponents of liberty, influenced by the Puritans, believed that human depravity mandated strictly limited government. James Madison famously argued for divided state powers, since men are not “angels.”

Traditionally evangelical Christians across the centuries have argued for lawful, limited government. They have themselves been pioneers in philanthropy, private social reforms, and entrepreneurship that flourish when government is restrained. So Wallis and the evangelical left essentially want their targeted constituency to abandon their own potent traditions in favor of reliance on and submission to state authority. “To disparage government per se — to see government as the central problem in society — is simply not a biblical position,” he insisted. No, biblical religion does not advocate anarchy. The state is divinely commissioned, but for limited, prescribed purposes, primarily centered on order, the rule of law, and civil freedoms. There may or may not be reasonable arguments for an expansive welfare and regulatory state. But they are not found directly in the Bible.

Amusingly, Wallis cited Romans 13, where St. Paul described the state’s role in “preserving the social order, punishing evil and rewarding good, and protecting the common good.” Wallis, who is a pacifist, does not typically quote this passage, which describes God’s having called the state to “wield the sword” to “execute wrath on him who practices evil.” All governments everywhere “wield the sword” not only through their militaries but also through their collection of taxes to pay for the vast social services that Wallis insists in their central mission. Force is apparently acceptable to Wallis in defense of the welfare state.

Wallis chided the Tea Partiers for their complaints about taxes. But who pays more taxes, Wallis’s campus activists, or the small business owners who form much of the Tea Party? Wallis claims “most of us would prefer smart and effective to ‘big’ or ‘small’ government.” But he is just striking his frequent post-ideological pose. When has Wallis ever argued for reducing government, except for its military, police and intelligence functions (ironically, the very functions prescribed by St. Paul)?

“Democratic accountability is essential to preventing the market from becoming a beast of corporate totalitarianism – just as it is essential for the government,” Wallis concluded. But why is he concerned only about “corporate totalitarianism” but not the far more dangerous government kind? He harrumphed that “God’s priorities should determine ours, not the priorities of the Chamber of Commerce,” with the elitist disdain for the private sector so common on the religious left. More spitefully, Wallis surmised that the Tea Party movement has racist overtones, though “likely not” every Tea Partier is racist. “Need I say that racism — overt, implied, or even subtle — is not a Christian virtue,” he intoned sanctimoniously, evidently forgetting that slander and judging hidden motives are also not very “biblical.”

Wallis urged a “dialogue” about “Just how Christian is the Tea Party Movement — and the Libertarian political philosophy that lies behind it?” But maybe there should also be a dialogue about Wallis’ Sojourners movement, which seems to judge religious orthodoxy almost exclusively by its commitment to Big Government.

The Bible and Government - Faith Facts

Time to Pull in the REINS on Executive Power? - Big Government (Blog)

What does the Bible say about government? - GotQuestions.org