Bad news is building for President Obama’s Afghan war strategy as his plan to quickly wrap-up the war and bring the troops home beginning next summer is in serious trouble.

Consider the confluence of four recent setbacks to the President’s policy: popular opinion turning against the war, our commander asking for more time, our Afghan ally having no confidence in Obama’s strategy, and the Taliban enemy being more resilient than we thought. 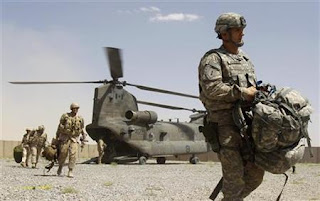 The shift in American support is likely linked to a number of factors like growing casualties. America’s total death toll in Afghanistan climbed above 1,000 earlier this month and the war is getting deadlier by the day. The worst single day for foreign forces operating in Afghanistan this year happened this month when insurgents killed 12 NATO soldiers including seven Americans. Last year, 317 American military personnel were killed in Afghanistan and if the current rate continues, 2010 will be the deadliest year yet.

Americans are growing weary of the war not just because of the casualties but its length. June marks the 104th month of U.S. military operations in Afghanistan which makes the Afghan war the longest in American history. The Vietnam War lasted 103 months and Obama hopes to begin withdrawing forces by month 113 (July 2011).

Americans are also skeptical about Obama’s justification for expanding the war — he sent 30,000 fresh troops to Afghanistan this year. America now has more troops in Afghanistan than Iraq — 94,000 compared with 92,000 in Iraq.

Obama campaigned in 2008 on a pledge to return the fight against Islamic extremism to Afghanistan, what he called the “right war.”

“I make this decision because I am convinced that our security is at stake in Afghanistan and Pakistan,” Obama said last December when announcing his strategy. But what evidence does Obama have that “winning” the “right war” will eliminate or reduce the jihadist threat, his justification for continuing the war?

History tells us that Western wars in the Islamic world tend to exacerbate, not reduce jihadism. Our latest jihadi threats appear to be coming from Yemen and Somalia, not Afghanistan. Is Obama going to start wars in these countries next?

Second, U.S. Army Gen. Stanley McChrystal, the top U.S. and NATO commander in Afghanistan, has announced that efforts to drive back Taliban insurgents were likely to take significantly longer than planned. McChrystal said operations in the Southern province of Kandahar, the Taliban heartland, “will happen more slowly than we originally anticipated.” He acknowledged the need to show progress before the end of the year to maintain political support in Washington.

McChrystal is slowing his campaign because he hit a serious snag in Marjah, a city in Helmand Province, which he describes as “a bleeding ulcer.” The general’s counterinsurgency strategy’s proof-of-concept was to drive the Taliban from Marjah, their last big stronghold in the province, and then make way for Afghan authorities to take over.

But in Marjah, four months after the operation began, the fighting remains raw. There is daily violence, Afghans continue to leave, the Taliban campaign of assassination and intimidation is widespread, there is still limited government and Afghan security forces continue to rely on Americans rather than taking the lead.

McChrystal said, “The biggest lesson we learned from Marjah was that the Afghan governance that we bring in … needs to be as robust as possible.”

Another American general, Brig. Gen. Frederick Hodges, said, “We talked about doing that [having the governance ready to go] in Marjah, but didn’t realize how hard it was to do.”

Marjah, with 60,000 residents, remains a work in progress and was to be McCrystal’s model for operations in Kandahar. That experience explains why the general postponed the promised operation in Kandahar, with more than a million people in the city and the surrounding districts.

The Kandahar operation could begin as early as July. Gen. Sher Mohammad Zazai, the Afghan army commander in Kandahar, said the operation will begin in July but take a break for Ramadan in mid-August and resume in mid-September. But a person close to the Kandahar governor told the New York Times the operation won’t start until after the harvest at the end of October.

In any event, the delayed operation creates a perception problem for the coalition. The Taliban can claim it sidelined the operation which shifts perceptions of Obama’s surge to the enemy’s favor.

“We need him [Karzai] to step up and take a leadership role, to get his government to support what we're doing. But he's either unwilling or unable to do it,” an American official in Afghanistan told the Washington Post.

It appears Karzai has other plans. Karzai fired two top cabinet ministers last week, which U.S. officials considered among the few competent and honest in that government. Karzai’s spokesmen said the men were fired over security lapses during the jirga, a tribal assembly of Afghan elders, allowing the Taliban to fire rockets at the opening ceremony. But the men and Karzai had a number of differences, such as Karzai’s plans to seek reconciliation with the Taliban.

Amrullah Saleh, the fired intelligence director, reportedly built an intelligence agency which reliably helped the U.S. Saleh, according to the London Guardian, said Karzai’s approach to the war is out of step with Obama’s strategy.

“There came a time when [Karzai] lost his confidence in the capability of the coalition or even his own government [to protect] this country,” a key Karzai aide told the Guardian.

The paper reports the Afghan president believes NATO is unable to deal with the insurgent sanctuaries on the Eastern border. That’s why Karzai is reaching out to Pakistan and the Taliban to settle the war and ignoring the U.S. strategy, which explains his lack of support in Marjah and his resistance to the pending Kandahar operation.

Finally, it’s clear the coalition underestimated the Taliban’s resilience. Four months after the Marjah assault, the Taliban maintains a significant presence in spite of thousands of coalition forces. In fact, “The Taliban are moving back into Marjah and getting stronger,” said Col. Kamaluddin, a deputy provincial police chief for Helmand province told the Associated Press.

Taliban intimidation keeps the civilian population constantly in fear and at arms length from coalition forces. Their assassination campaign has been especially effective targeting anyone associated with government. The most egregious case came last week when the 7-year-old grandson of an Afghan official was executed for being an informant.

Obama’s Afghan war strategy is failing. Patience is running out at home, his concept of the operation is failing in Marjah and will also in Kandahar if not adjusted, the U.S. and our Afghan partner lack mutual confidence, and we face a resilient enemy. That leaves him two choices.

The President can abandon Afghanistan - pull our troops out now - and rely on special operations forces and surgical munitions to target extremists that re-emerge. Alternatively, he can commit to fighting a classic counterinsurgency that could last many more years. Both options are risky but his current short-fused strategy is worse.

No Easy Exit From Afghanistan - NewsMax.com

Taliban has new reason to take back Afghanistan - The Hill

Poll: Increase in those against Afghan war - UPI