A secret meeting of the elite financial leaders of the world being held in one of Spain's most exclusive resorts may hold the future of the Euro, Europe's common currency, in its hands as it meets to discuss the fate of the Euro and the economic crisis facing the European Union. This secret gathering held on an annual basis and made up of the world's greatest financial minds today will discuss the erosion of the Euro which they believe could nudge the world into a financial crisis that could trigger unrest and radicalization of the political climate. 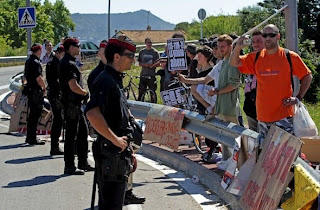 A meeting of the world's elite financial leaders to determine the outcome of the Euro and Europe's economic crisis is a precursor to the end of time scenario that can be found in Bible prophecy.

The Bilderbergers, and elite group of financial leaders from across the world meet annually to discuss the economic situations in our world today. Their most recent meeting focused on the financial crisis in Europe and the Euro, Europe's common currency, to see if indeed there is a solution to this expanding crisis. There are fears that if the Euro fails it could cause a global crisis like has not been seen pushing the world into economic turmoil.

This report of an elite group of financial leaders secretly meeting to solve Europe's economic woes has a real connection to the last days scenario that can be found in Bible prophecy. The apostle John, the author of the prophetic book of Revelation, wrote 2000 years ago that the last 3 1/2 years leading up to the return of the Messiah Jesus Christ would be focused on the economy of the world and how mankind would handle any financial crisis.

Revelation 18 speaks of an economic world headquarters located in Babylon, the Biblical name for modern-day Iraq. According to this prophetic account, the merchants of the world would become very rich in partnership with the world leader at that time known as the Antichrist. All alive on earth during that period would have an identification mark on their forehead or the back of their hand in order to be able to buy or sell anything (Revelation 13:16-17).

An elite group, known as the Bilderbergers, meeting to resolve the worlds financial woes in secret meetings, is indeed a precursor to the fulfillment of Bible prophecy.

Are These Powerful 20 Men And Women Going To Decide The Fate Of The World This Week? - Business Insider

The True Story of the Bilderberg Group - Daniel Estulin (Book)