NASA: Solar Storm Could Cause 20 Times the Damage of Hurricane Katrina

Richard Fisher, a leader with NASA, the National Aeronautics and Space Administration, says that the earth and space are about to come into contact in a way that is new to human history, adding that the sun is waking up from a deep slumber and in the next few years, we can expect to see much higher levels of solar activity. Fisher said that at the same time our society who has more technology that in the past has developed an unprecedented sensitivity to solar storms with GPS navigation, air travel, financial services, radio communications, and even our power grids that could be knocked out by intense solar activity.

The National Academy of Sciences has warned that a century class solar storm could cause 20 times more economic damage then Hurricane Katrina did several years ago. 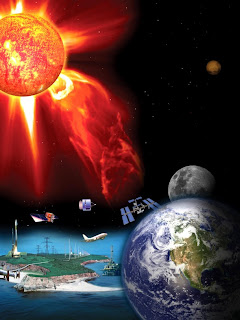 The warning by NASA and The National Academy of Sciences that a soon coming solar storm could cause economic damage 20 times that of Hurricane Katrina is a precursor to the end of times scenario that can be found in Bible prophecy.

Leaders of NASA and The National Academy of Sciences are warning that our technological society must wake up to the fact that the sun is waking up from a deep slumber that could wreak havoc to our society today with all of its technology used in daily life. This report seems to be a page out of Bible prophecy and what the ancient Jewish prophets said would happen in the last days.

The book of Revelation is full of passages that foretell of this type of activity in our solar system. Revelation 6:12 speaks of the solar changes that affect the earth. Revelation 8:7-11 reveal ecological judgment on the earth from the heavens. John, who wrote the book of Revelation, wrote of the sun being destroyed by one third (Revelation 8:12). John also revealed that the sun will scorch man on earth to the extent that he will even blaspheme God for this judgment. These judgments upon the earth and earth dwellers happen in the seven year Tribulation period that is coming.

This warning from NASA is indeed a precursor to the fulfillment of Bible prophecy.

Solar Storms Could Be Threat in 2013 - MyFoxNY.com

On The Precipice Of Solar Induced Disaster - Modern Survival Blog