Mighty Muscles Flex in the Mideast

Matthew 24:6 says there will be rumors of war in the end times and current Mideast matters are definitely supporting this prediction. If you put your ear to the ground and eye to the press you can hear the battle cry shouts and observe the deployment of soldiers, heavy military equipment, and deadly arsenals in the Holy Land. Christ, apparently quoting Isaiah 19:2, further prophesied the coming of end time's regional conflicts; "kingdom against kingdom". (Matt. 24:7)

Mideast muscles flex, sabers rattle, and news reports roll off mainstream presses almost daily suggesting Christ was right and that Jordan’s King Abdullah’s April 17, 2010 warning of a summertime Mideast war may not be farfetched. Echoing Abdullah’s wartime sentiment, Syrian President Bashar Assad recently declared the following in a BBC interview on 6/17/2010: Recent news headlines trumpet the sound of a coming war in the Middle East. Below are just a few from various media sources over the past few months. (Some of these headlines and comments are slightly paraphrased to reflect the author's opinions.) The Turkey flotilla aid for Hamas episode seems to have been the manufactured crisis the enemies of Israel didn’t need. It appears to have awoken the sleeping giant of the Middle East, the Israeli Defense Forces. It is difficult to know if the above rumors of war will result in a skirmish or manifest into the Mother of all Mideast Wars. However, according to the Bible, the Israeli War prophecies described in Isaiah 17:1, Psalm 83, Ezekiel 38 & 39, and Jeremiah 49:34-39 are coming!

Possible scenario: the prophecy regarding Elam (Iran) in Jeremiah 49:34-39 might find fulfillment in two stages. First - a preemptive Israeli Strike upon the foremost of Iran's might, its nuclear sites. Second - a subsequent divine defeat for their role in Ezekiel 38 & 39 "Gog of Magog" invasion that could send Iranians into a massive dispersion. A strike upon the foremost of Iran's might and a massive dispersion are predicted by Jeremiah. 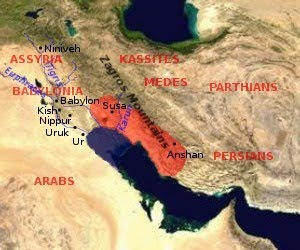 Interestingly Jeremiah and his contemporary Ezekiel issue end time's prophecies regarding Iran. However, Jeremiah identifies modern day Iran as Elam, and Ezekiel alludes to them as Persia. (Map showing the area of the Elamite Empire (in red) and the neighboring areas. The approximate Bronze Age extension of the Persian Gulf is shown. Today, Iran's primary nuclear site (Bushehr) exists in the proximity of ancient Elam.)

The word of the LORD that came to Jeremiah the prophet against Elam, [Iran] in the beginning of the reign of Zedekiah king of Judah, saying, “Thus says the LORD of hosts: ‘Behold, I will break the bow of Elam, The foremost of their might [suggests potential nuclear ramifications since prophecy probably remains unfulfilled]. Against Elam I will bring the four winds From the four quarters of heaven, And scatter them toward all those winds; There shall be no nations where the outcasts of Elam will not go. [massive dispersion could occur in the aftermath of Ezekiel 38 & 39] For I will cause Elam to be dismayed before their enemies And before those who seek their life. I will bring disaster upon them, My fierce anger,’ says the LORD; ‘And I will send the sword after them Until I have consumed them. I will set My throne in Elam, And will destroy from there the king and the princes,’ says the LORD. ‘But it shall come to pass in the latter days: [end time's implications] I will bring back the captives of Elam,’ says the LORD.” (Jeremiah 49:34-39; NKJV, emphasis added)

Gearing Up for the Big Assault, Against Iran - Yeshiva World News