Isaiah 17 - An Oracle Against Damascus

In the past couple of years it has become even clearer that Isaiah’s prophecy of the destruction of Damascus will soon come to fulfillment, perhaps being part of the Psalm 83 scenario I’ve written about. If so, it would explain why Syria is not included among the coalition of Muslim nations who will gather against Israel in the Battle of Ezekiel 38. Updating our study of Isaiah 17 seems a fitting conclusion to our recent reviews of Ezekiel 38 and Psalm 83. 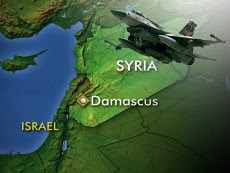 Emboldened by the outcome of the 2006 Hezbollah Israel war, Syria has become ever more bellicose in it’s behavior toward Israel, as if inviting confrontation. Aggressive acts have included moving large military forces onto the Golan, opening the crossing that gives Syrians access to Israel for the first time since 1973, forming and training a Syrian terrorist force to infiltrate Northern Israel, and openly helping Hezbollah re-arm in violation of UN resolution 1701. Now Hezbollah and Syria are building a massive fortified wall, 22 kilometers long, that promises to be one of the biggest fortified structures in the Middle East. It is designed as an obstacle against any Israeli tank forces heading through Lebanon toward the Syrian capital, Damascus. And most recently, Syria has moved 800 long range missiles into firing position and updated targeting coordinates for specific locations in Israel in preparation for war.

It’s been known for some time that Syria has one of the world’s most advanced chemical weapons programs, even though such things are illegal, and is probably in possession of the bulk of Saddam Hussein’s WMDs that the MSM (main stream media) delights in telling you never existed. Recent satellite imagery suggests significant efforts to update Syria’s known chemical weapons facilities. They’ve also mobilized reserves, set up alternate communication centers, and moved all official historical and legal documents out of Damascus. They did this because they believe that Israel will respond to a chemical attack by destroying Damascus with nuclear weaponry. They’ve recalled all their citizens living in Lebanon. They’ve purchased Russian arms and defensive systems costing hundreds of millions of dollars in an effort to protect Damascus.

In July 2007, a chemical warhead exploded at a Syrian missile facility while being fitted to a Scud missile, killing dozens of Iranian and Syrian technicians. The only likely target within range of the missile was Tel Aviv. Then, just 2 months later, the Israeli bombing of a secret Syrian facility deep inside the country made headlines and demonstrated Israel’s ability to render the Russian state-of-the-art anti-air defenses ineffective. These systems were sold to both Syria and Iran to protect against US or Israeli attacks by air. The presence of nuclear materials at the Syrian base has been confirmed, so it might have been the location of at least a dirty bomb assembly plant and perhaps even a clandestine nuclear weapons facility. The North Koreans were heavily involved in this, and are suspected of still helping Syria to develop some kind of nuclear weapons capability.

More recently Syria has purchased untold millions of dollars worth of offensive and defensive weaponry from Russia and Iran, making every population center in Israel a viable target. Passing a portion of this weaponry through to Hezbollah, they’ve all but transformed this terrorist organization into a regiment of the Syrian army, and made Lebanon their first line of defense against Israel.

While some of this is more than the MSM has been willing to share with you, it is a matter of public record. My guess is that there’s a lot more going on that we don’t know about, making matters even more urgent. So let’s take another look at Isaiah 17, An Oracle Against Damascus, while it’s still prophecy.

“See, Damascus will no longer be a city but will become a heap of ruins. The cities of Aroer will be deserted and left to flocks, which will lie down, with no one to make them afraid. (Isaiah 17:1-2)

Because of the language of these verses, many scholars believe that this prophecy was only partially fulfilled when the Assyrians defeated the Arameans and overran their capital, Damascus, in 732 BC. To this day Damascus is thought to be the world’s oldest continuously inhabited city with a 5000-year history and a population close to 2 million, yet Isaiah 17:1 indicates that it will one day cease to exist.

Some believe the phrase “cities of Aroer” refers to Aramean territory east of the Jordan River around the Arnon River, which flows into the Dead Sea in southern Jordan. However, the Jewish Encyclopedia claims that this phrase in Isaiah 17:2 is probably translated incorrectly because the geographical distance from Damascus is too great. While they say it’s possible that there may have been another Aroer near Damascus, it is more likely that the passage should be rendered “the cities thereof shall be forsaken.” If that’s the correct translation, it would include the Hezbollah stronghold in the Bekaa Valley of Lebanon, which was part of Aramean territory in Isaiah’s time, and is in a direct line between Beirut and Damascus.

The fortified city will disappear from Ephraim, and royal power from Damascus; the remnant of Aram will be like the glory of the Israelites,” declares the LORD Almighty. “In that day the glory of Jacob will fade; the fat of his body will waste away. It will be as when a reaper gathers the standing grain and harvests the grain with his arm - as when a man gleans heads of grain in the Valley of Rephaim. (Isaiah 17:3-5)

This segment speaks of the defeat of Damascus in 732BC and the destruction of Samaria 10 years later (722 BC). Damascus continued to exist as part of the Assyrian Empire and is still here today, but the ruins of Samaria are just now being excavated out of the sandy soil of Israel. The systematic relocation of the ruling classes to the far reaches of the Assyrian Empire is also in view here, symbolized by the fat of Jacob’s body wasting away. This was standard Assyrian policy to reduce the likelihood of subsequent rebellion among their conquered peoples. Jacob and Ephraim are alternate names for the Northern Kingdom, and Samaria was its capital.

Yet some gleanings will remain, as when an olive tree is beaten, leaving two or three olives on the topmost branches, four or five on the fruitful boughs,” declares the LORD, the God of Israel. (Isaiah 17:6)

Not all the people were dispersed. Farmers were left behind to tend the crops and protect the harvest for their new rulers. They were joined by refugees from other parts of Assyria and their combined descendants were known as the Samaritans in the time of Jesus. (A quick reading of 2 Chronicles 11:16 shows that all the faithful from the 10 northern tribes moved south at the time of the civil war that divided the nation after King Solomon’s death 150 years earlier. From then on, all 12 tribes were represented in the Southern Kingdom of Judah, so the 10 tribes from the North weren’t totally lost. The Lord has always preserved a believing remnant from all the Tribes of Israel.)

In that day men will look to their Maker and turn their eyes to the Holy One of Israel. They will not look to the altars, the work of their hands, and they will have no regard for the Asherah poles and the incense altars their fingers have made. In that day their strong cities, which they left because of the Israelites, will be like places abandoned to thickets and undergrowth. And all will be desolation. (Isaiah 17:7-9)

This is another passage that’s problematic for those who try to consign the whole passage to history. There is simply no reason to believe that the Assyrians turned to God following their conquest of Aram and Israel. And far from abandoning their cities because of the Israelites, it was the Israelites who were defeated and dispersed. The yet future Jewish attack on Damascus causing the destruction and abandonment of Syrian cities, and the eventual return of the survivors to their God is a much more likely fulfillment. And it could happen soon.

You have forgotten God your Savior; you have not remembered the Rock, your fortress. Therefore, though you set out the finest plants and plant imported vines, though on the day you set them out, you make them grow, and on the morning when you plant them, you bring them to bud, yet the harvest will be as nothing in the day of disease and incurable pain. (Isaiah 17:10-11)

Asshur, father of the Assyrians, and Aram, father of the Arameans were both sons of Shem. Aram’s son Uz is the traditional founder of Damascus. (The setting for Job, the Bible’s oldest book, is the Land of Uz.) The knowledge of God in the memories of these patriarchs cannot be questioned. It wasn’t that they never knew Him, but that they had forgotten Him, abandoned Him in favor of the Canaanite gods of the region, Baal and his consort Ashtoreth (aka Asherah, Astarte, Ishtar, Aphrodite, Venus.) Currently Syria is almost totally Muslim. Until they return to their Maker and Savior none of their plans and schemes will prosper in the long run, no matter how promising they seem at the beginning.

Oh, the raging of many nations - they rage like the raging sea! Oh, the uproar of the peoples - they roar like the roaring of great waters! Although the peoples roar like the roar of surging waters, when he rebukes them they flee far away, driven before the wind like chaff on the hills, like tumbleweed before a gale. In the evening, sudden terror! Before the morning, they are gone! This is the portion of those who loot us, the lot of those who plunder us. (Isaiah 17:12-14)

Having conquered most of the Middle East including the Arameans and the Northern Kingdom, the Assyrians set their sights on the Southern Kingdom, Judah. Assyria’s King Sennacherib brought his armies almost literally to the gates of Jerusalem, so close his commanders were within speaking distance of the Jewish defenders. On the night before they were to attack, the Lord sent His angel into the Assyrian camp on Mt. Scopus to slaughter 185,000 Assyrian soldiers. Before dawn they had packed up and fled, ending 44 years of conquest. (Isaiah 37:36-38) This time in Israel’s history so parallels the Jewish view of the End Times that Sennacherib is seen by them as a type of the anti-Christ, while Judah’s King Hezekiah models the Messiah.

But notice that Isaiah speaks of many nations raging against God’s people, not just Assyria, leading us once again to consider Sennacherib’s defeat to be a partial fulfillment of Isaiah’s prophecy.

The phrase “rushing of many waters” is often used to describe the sound of loud voices and today many nations are stirred up. The cry of anti-Israeli sentiment can be heard around the globe. The various Mid-East “peace” conferences combined with the Gaza war and the recent boarding of the Turkish/Terrorist flotilla have left Israel standing alone against all but irresistible pressure to negotiate away its very existence. Syria and Iran are dead certain that Israel will attack soon, and are preparing accordingly. Israel’s other next-door neighbors are also preparing for war, and indeed many nations are taking sides.

Israel is not blind to these mounting threats, but until lately seems to have been ignoring them. That’s about to stop. Israeli Prime Minister Benyamin Netanyahu has told the world he will not apologize for defending his country and will continue to do so even if it results in more confrontations. We can easily envision a scenario that escalates into the final fulfillment of Isaiah 17, the destruction of Damascus. Once again there will be sudden terror in the evening, and before morning they will be gone. If you listen carefully, you can almost hear the footsteps of the Messiah.

Syria: Next War with Israel Will Be Ruinous - BPB (Michael G. Mickey)