Helen Thomas: Martyr of the Left

I've received a number of queries from some of my "progressive" friends and acquaintances since writing a blistering commentary that probably contributed to the forced retirement of Helen Thomas.

Not a one of them, by the way, said: "Farah, I know I don't often agree with you about matters like government redistribution of wealth, the need for government to protect individual liberties rather than create group rights, gun control, freedom of the press and a host of other issues, but you were right about Helen Thomas. She was way over the line. What she said was blatantly anti-Semitic, and there was no excuse. Good riddance to her and congratulations to you." 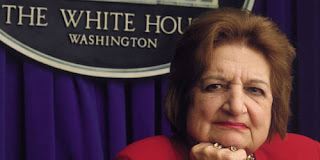 In fact, every single one of the comments I received from so-called "enlightened progressives" suggested that I had overreacted to Thomas' remarks.

In other words, from the admittedly small sampling of perhaps 50 e-mails I received from avowed "progressives" on the matter of Helen Thomas, most of them either said they agreed with her or that I was being too tough on her.

What this suggests to me is that there is a growing intolerance, to use one of its terms, among the "progressive left" toward Israel and Jews in general.

That should be disturbing to every American.

Why would so-called "progressives," whose religion is tolerance and diversity, be so willing to excuse the kind of hate speech Helen Thomas offered in that infamous video?

I don't want to beat a dead horse on this subject, but seldom in American public life do we see such stark examples of anti-Jewish bigotry on display as we saw in Helen Thomas' downfall.

Yet, virtually all of the criticism that led to her resignation from the Hearst Corporation came from the "conservative right."

You know the answer – and so do I.

These are indeed rhetorical questions.

The answer is that the so-called "progressive liberal-left" – internationally as well as domestically – is increasingly anti-Israel and anti-Jewish.

Jews are no longer part of a protected minority class, apparently, in the eyes of the left – if indeed they ever were.

That's pretty shocking given the 5,000-year historical record of anti-Jewish persecution. There is no parallel in history to the persecution of the Jews – none, zip, zilch, nada.

The recent international furor over the Gaza flotilla is an example of how there is simply a different standard of behavior expected from Jews and Israelis than any other people in the world. The "progressive liberal-left" can understand why Arabs send their children into Israel to act as suicide bombers and fire rockets and missiles from their territory into Israeli towns and villages, but it cannot comprehend why Israel seeks to defend itself.

There's a word for that kind of double-standard – bigotry.

It's happening all over the world. It is as if Europeans and Asians and Africans and many Americans were under a spell – a spell of vicious, irrational, hateful anti-Semitism. And nearly all of it comes from people who, in one form or another, would label themselves "progressives."

Yet, how does hating a people, or, at least holding them to a different standard than others, comport with a "progressive and tolerant and pluralistic" worldview?

Of course, it doesn't.

Those are just words.

They are just slogans.

They have nothing to do with the way the "progressive liberal-left" actually behaves or thinks.

Which is why I must remind you of something little understood in the world today: The Holocaust was the work of a "progressive" socialist regime. It was the work of the national socialists of Germany. Many today are under the mistaken belief that Adolf Hitler was some kind of right-winger. He was not. He wasn't a Communist, but he was a socialist, which, if you remember my lesson on the political spectrum, can never, ever be part of the political right.

The Holocaust was a mere 65 years ago.

And, already the world has forgotten – at least the world of the left.

Does Obama Actually Agree with Helen Thomas on Palestine? - RedState