Ten people died in a series of bombings across Iraq Monday, reminding the world that the violence there has not ended. On May 2, a roadside bomb exploded near buses carrying Christian students to Mosul University. Minutes later, a car bomb detonated near those same buses. One bystander was killed and over 100 people were injured in the bombings in this northern city that boasts a large Christian population. While many attacks in Iraq are meant to cause general instability, a significant number purposely target Christians. 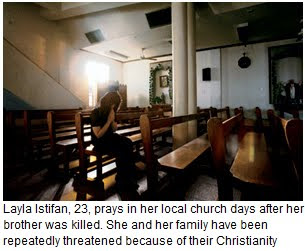 The Iraqi government has had its hands full to overflowing during the past few years trying to cool the fires of insurgent violence. Much of the violence comes from Al-Qaeda rebels and Islamic extremists who not only hate Christians, but the Sunni members of the Sahwa (or "Awakening") movement, who have sided with and assisted US coalition forces in the reformation of Iraqi democracy.

Shootings, bombings, rapes and kidnappings of middle class citizens, particularly Christians, increased markedly during the past year in Baghdad, Mosul, and the Sunni villages of the Nineveh Plain. This is one of the worst waves of violence against Christians since the US-led invasion of Iraq in 2003, when, ironically, Christians fled the violence in a mass exodus. While media coverage downplays the religious significance, sources on the ground in those communities repeatedly pinpoint Islamic extremists as the culprit. Not only religious differences, but also cultural and political differences fuel their drive to exterminate Christ-followers.

Christians in Iraq aren't necessarily being shot to death, kidnapped or raped for sharing their faith. They're often killed for owning a hair salon that cuts women's hair, for allowing women to socialize with men, for not wearing a birqa, for openly selling pork or liquor, or even for entering a voting booth.

According to Nina Shea, director of Hudson Institute's Center for Religious Freedom:

The following represents a small portion of the bombings and attacks perpetrated against Iraqi Christians during the past year: On May 3rd of this year, the General Secretariat of the Islam Supporters sent a letter to an Iraqi bishop, warning Christians in Baghdad:

"Leave the country of Muslims (Iraq) for good and immediately in the form of mass transmigration. Our swords shall be placed upon your necks and the necks of your followers and other Christians residing in Mosul."

Iraq is home to the world's oldest surviving Christian civilizations. The Christian population of Iraq is comprised of Chaldean Catholics, Assyrians, Armenian Christians, Syriac Orthodox believers, and Protestants. Believers there can trace their roots back 2000 years to when the Apostle Thomas shared the news of Christ with some of the first converts in the year AD 35.

The Christian population of Iraq is widely estimated to make up just three percent of the total population, approximately 500,000 to 800,000 people, yet Christians have been the targets of a majority Islamic terrorist acts. Christians also constitute 20 to 40 percent of Iraq's refugees.

Thanks in large part to Christian refugee organizations in the US and widespread communication and understanding of that assistance amongst the Christian communities in the Middle East, Christians escaping Iraq are often already registered with placement organizations before they flee.

A 2004 article in Time touched on the sad irony of the US-led invasion - particularly that of American Christians, who backed Bush's decision to go to war with Iraq:

"Many Iraqi Christians say their reversal of fortune has been especially disappointing given the backing the Bush Administration receives from evangelical Christians. 'Why did the US come here?' asks Mardirosian, the Armenian-Catholic leader, 'To protect the Christians or allow others to kill them?'"

Much of the recent increase in violence toward Christians was in preparation for Iraq's March 2010 parliamentary elections. Islamic extremists did not want Western-sympathizing Christians to vote. From February until the March 7th election date, Iraq Body Count tallies at least 228 people (Christians and non-Christians) killed, and another 176 people killed between election day and the release of the final results about a month later.

For Christians in Iraq, the threats persist - USA Today

Persecution News (Iraq) - The Voice of the Martyrs