Try as I might to get away from thinking on the stupefying swiftness with which the world's monetary crises are reshaping our existence, I cannot. I consider only the so-called peace process being foisted upon Israel by the American administration and other members of the Quartet - the United Nations, European Union, and Russia - to be of slightly more profound prophetic importance than the current economic chaos. So, please indulge me yet another commentary-swipe at the matters involved.

Most who have the ability to receive news reports are aware that the Western world in particular is in unprecedented economic turmoil. While the Great Depression of the 1930s was terrible in its ramifications for the planet's inhabitants, the crisis was relatively simple in its cause-and-effect dynamics. Relatively simple, that is, compared to the complexities that the decades have wrought with the evolution of interlinkage between banking institutions and governments.

Computers, satellites, and a myriad of other technological wonders have intertwined the fiscal health of continents in a way that was impossible to imagine before the advent of such technology. Actions taken in London, Berlin, Paris, New York, or other such disparate financial centers can instantaneously cause reverberations globally. This intimate linkage can and has included mechanisms to use in averting - perhaps better put, in postponing - disastrous monetary crises. Manipulation by the wizards of finance have worked to this point. But now it seems their magic has fueled a gathering economic storm that is about to break upon a world ill-prepared to cope with what is coming.

Now for the conspiracy-theoretician within your essayist. The question that leaps to the forefront is how much of the economic storm that is ready to break upon the world was fueled by the stumbling, bumbling machinations of those at the monetary controls, and how much was deliberately and masterfully contrived. 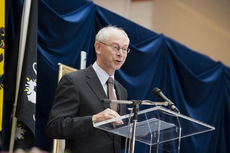 What follows provides a glimpse into the eye of that cyclonic economic turbulence:

BRUSSELS - European Council President Herman Van Rompuy has said he is looking to establish a clearer "hierarchy" among the EU institutions and member states to make it easier to deal with any future crises in the eurozone...

"We are working in order to have some crisis cabinet because we are a lot of players in the field - certainly when you are in crisis - and there is not much hierarchy or organic links between the main players and the main institutions.

...Really, this is a problem," he told a gathering organised by European Movement International on Tuesday [May 25]...

The tentative proposal comes after the EU's often torturous approach to the Greek debt crisis - a protracted response that widened the problem to the eurozone and almost made it a global crisis.

As market-induced panic looked set to gain a foothold, and following the intervention of US President Barack Obama, the sixteen-member eurozone agreed on a €750 million EU/IMF package earlier this month.

But it is widely agreed that this is only a stop-gap measure and that the EU's budget discipline rules need to be tightened. ("Van Rompuy Wants Clearer 'Hierarchy' to Deal with Future Crises," EUobserver,5/26/10)

Bible prophecy again asserts its truth into our daily headlines regarding breaking developments. Like the peace efforts that pressure Israel to give the international community and the Jewish state's enemies their way dominating news headlines, powerful global economic rearrangements involving the reviving Roman Empire at the heart of the process now also command top headlines above the front-page folds of the world's newspapers.

Reuniting Europe, and its first president demanding greatly increased powers to act in the present European and global financial meltdown, hammers home the point. This generation almost certainly is witnessing the groundwork being laid that will assure Antichrist's eventual elevation to supreme authority prophesied in the thirteenth chapter of Revelation. The pace with which things are shaping makes one wonder whether that man of sin might step onto the stage of history quite soon.

As has been said before, one of the most often asked questions we get at prophecy conferences is: Is America in Bible prophecy?" We most always answer in one form or another, "No, it is not mentioned by name." Then, I, at least, must add that this, certainly the most materially blessed nation and one of the most spiritually blessed countries to exist on earth, is in Bible prophecy by implication. Our current president is at the very heart of influencing the two most critical news headlines of these troubled days, both of which are at the top of the list as being Bible prophecy indicators for comprising world conditions at the very end of the age. The U.S. thus seems to be in the lead in helping pave the way for the world's final führer.