Time to Plan for War

So much for US President Barack Obama's famed powers of persuasion. At the UN's Nuclear Non-Proliferation Treaty review conference which opened this week, the Obama administration managed to lose control over the agenda before the conference even started.

Obama administration officials said they intended to use the conference as a platform to mount international pressure on Iran to stop its illicit nuclear proliferation activities. But even before the conference began, with a little prodding from Egypt, the administration agreed that instead of focusing on Iran, the conference would adopt Iran's chosen agenda: attacking Israel for its alleged nuclear arsenal.

Last week the Wall Street Journal reported that US officials were conducting negotiations with Egypt about Egypt's demand that the NPT review conference call for sanctions against Israel for refusing to join the NPT as a non-nuclear state. The Journal quoted a senior administration official involved in the discussions saying, "We've made a proposal to them [Egypt] that goes beyond what the U.S. has been willing to do before."

Among other possibilities, that proposal may have included a US agreement to appoint a UN envoy responsible for organizing a UN conference calling for the Greater Middle East to become a nuclear-free zone. In diplomatese, "Middle East nuclear-free zone" is a well-accepted euphemism for stripping Israel of its purported nuclear capability while turning a blind eye to Iranian, Syrian and other Islamic nuclear weapons programs. Egypt's demand, which it convinced more than a hundred members of the Non-Aligned bloc to sign onto, is for Israel to open its nuclear installations to international inspectors as a first step towards unilateral nuclear disarmament.

On Wednesday the US joined the other four permanent members of the Security Council in signing a statement calling for a nuclear-free Middle East and urging Israel, Pakistan and India to accede to the NPT as non-nuclear states. Following the US's lead, on Thursday Yukiya Amano, the new Director General of the International Atomic Energy Agency wrote a letter to IAEA member states asking for their suggestions for how to convince Israel to sign the NPT.

So as Iran - an NPT signatory - makes a mockery of the treaty by building nuclear weapons in contempt of its treaty obligations, the US has actively supported Iran's bid to use the NPT review conference as yet another UN forum for bashing Israel.

It bears recalling that the primary goal of the NPT is to prevent nuclear proliferation. From the amount of attention Israel is receiving at the NPT review conference, you could easily get the impression that Israel's purported nuclear arsenal is the gravest proliferation threat in the world today. But history shows that this is nonsense.

Israel's alleged nuclear arsenal, which it has reportedly fielded for four decades, has not led to a regional nuclear arms race. Notwithstanding their protestations to the contrary, Israel's neighbors fully recognize that the purpose of Israel's undeclared nuclear arsenal is to guarantee Israel's survival and consequently only threatens those who would attack the Jewish state with the intention of annihilating it. This is why although it is four decades old; Israel's undeclared nuclear arsenal has never caused a regional nuclear arms race. It has never harmed or called into question the relevance or usefulness of the NPT's international non-proliferation agenda. Moreover, as a non-signatory to the NPT, Israel has the right to develop a nuclear program.

Iran on the other hand gave up that right when it joined the NPT regime. So too, in sharp contrast to Israel's alleged program, it is clear that Iran's nuclear project is aggressive rather than defensive. Consequently, it is universally recognized that if Iran becomes a nuclear power, Egypt, Saudi Arabia, Turkey and other states will begin developing their own nuclear arsenals in short order. That is, it is absolutely clear that if the NPT is to have any relevance in the coming years, if there is to be any hope that counter-proliferation regimes can be useful; preventing Iran from acquiring nuclear weapons must be its signatories' chief aim.

But then, in the end it makes no difference that the US has followed Iran's lead at the NPT conference. Even if the administration had managed to make Iran's nuclear weapons program the focus of debate, it wouldn't have mattered because diplomacy is no longer a relevant tool for preventing Iran from becoming a nuclear power. Appeasement has failed. Sanctions are dead in the water in the Security Council. 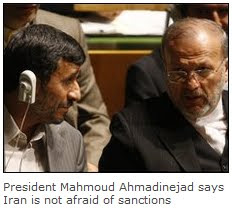 And even if the Security Council passes a sanctions resolution, they will have no impact on Iran's behavior. Iranian President Mahmoud Ahmadinejad made that much clear in his speech on Monday and in subsequent remarks to the media. As he put it, "While we do not welcome sanctions, we do not fear them either. Sanctions cannot stop the Iranian nation."

What all of this demonstrates is that the diplomatic track - from appeasement to sanctions - is irrelevant for contending with Iran's nuclear program. The only way to stop Iran from acquiring nuclear bombs is to use military force to destroy or severely damage its nuclear installations.

And this of course is something Obama will not do. His begging-to-shake-hands policy towards Iran on the one hand and his iron fist policy towards Israel on the other makes it absolutely clear that Obama will do nothing to prevent Iran from becoming a nuclear power. Rather than correct his abysmal failures, Obama seeks to hide them by minimizing the seriousness of the threat.

In remarks to the media this week, a White House official downplayed the Iranian threat. He told the Financial Times that Iran's "nuclear clock has slowed down. They are not making dramatic technical progress given the difficulties they are facing in their [uranium] enrichment program and the fact that their efforts to build secret facilities have been disclosed."

The fact that the US's published intelligence estimates of Iran's nuclear program contradict this claim didn't seem to faze the official.

The US's abdication of its responsibility as the leader of the free world to prevent the most dangerous regimes from acquiring the most dangerous weapons means that the responsibility for preventing Iran from acquiring nuclear weapons has fallen on Israel's shoulders. Only Israel has the means and the will to prevent Iran from becoming a nuclear power. And the message the NPT follies convey is that Israel must develop contingency plans for attacking Iran as quickly as possible.

Daily reports of weapons build-ups and military exercises in Iran and among Iran's clients Syria, Hizbullah and Hamas expose the contours of their war plans.

Syria and Iran have armed Hizbullah with some 40,000 missiles and rockets, including hundreds of Scud missiles and guided surface-to-surface solid fuel M600 missiles with a 250 km range and this week Hizbullah threatened to attack Israel with non-conventional weapons. Syria itself has a formidable chemical and biological arsenal as well as a massive artillery and missile force at its disposal.

As for Hamas, since Operation Cast Lead Iran's Palestinian proxy Hamas has expanded its own missile arsenal. Today it reportedly has projectiles capable of reaching Tel Aviv and beyond.

As for Iran, as its seemingly endless military exercises make clear, the mullocracy has the capacity to use conventional weapons to imperil global oil shipments from the Persian Gulf. So too, this week's report that Osama Bin Laden may have decamped to Iran in 2003 merely served to underline Iran's ability to utilize jihadist terror forces throughout the world.

From the open preparations for war that Iran and its clients have undertaken, it is clear that if they initiate the next round of fighting they will fight a four front war against Israel. That war will be dominated by missile attacks against the entire country aimed at breaking the will of the Israeli people while forcing the IDF to divert vital resources away from Israel's primary target - Iran's nuclear installations - to contend with Iran's proxies' missile stores.

As they consider Israel's options going forward, Israel's political and military leaders have to take two considerations into account. First, the side that initiates the conflict will be the side that controls the battle space. And second, there is a real possibility that the Obama administration will refuse to resupply Israel with vital weapons systems in the course of the war. The fact that Israel will be roundly condemned by the UN and its component parts is a certainty regardless of who initiates the conflict and therefore is irrelevant for operational planning.

Armed with these understandings, it is apparent that Israeli contingency plans for war must have limited goals and should be guided by the overarching aim of beginning and ending the war quickly. Luckily, Israel excels at limited, swift campaigns.

Responding to one of Syrian President Bashar Assad's recent threats, Foreign Minister Avigdor Lieberman promised last month that if Assad attacks Israel, Israel will bring down his regime. While bringing about the utter defeat of Iran's regional proxies is a reasonable goal, it cannot be Israel's goal in the coming war.

In the coming war, Israel will have only one goal: to destroy or seriously damage Iran's nuclear installations. Every resource turned against Iran's proxies must be aimed at facilitating that goal. That is, the only thing Israel should seek to accomplish in contending with Syria, Hizbullah and Hamas is to prevent them from diverting Israeli resources away from attacking Iran's nuclear installations.

This means that Israel must launch a preemptive strike against Hizbullah's missiles and missile launchers, Syria's missiles, artillery and launchers, and Hamas's missiles and launchers. As for their short-range rockets, Israel should do its best to intercept them and otherwise hunker down to weather the storm of Katyushas and Qassams. Life on the homefront won't be easy. But it won't be impossible either, as we saw in 2006.

Almost every assessment of a possible Israeli strike on Iran's nuclear installations has assumed that Israel will use its air force to strike. All that can be said of that analysis is that, just as there is more than one way to skin a cat, so there is more than one way to destroy Iran's nuclear installations. An Israeli strike should utilize all of them to keep the Iranians off balance and on the defensive.

These are dangerous times. Iran, which seeks to position itself as a regional superpower, has been emboldened by the Obama administration's abdication of US global leadership. Only Israel can prevent Iran from endangering the world. But time is of the essence.