Theology for a Holocaust

UC-San Diego student Jumanah Imad Albahri last week, under questioning from David Horowitz, refused to condemn Hamas and Hizballah and endorsed a genocidal statement by Hizballah leader Hassan Nasrallah. Many were shocked. Albahri’s statement is being treated as a singular utterance, a lapse that has nothing to do with the Muslim Students Association of which she is a part, and certainly not with Islam as a whole. 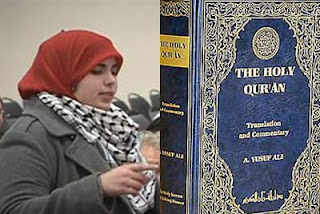 Unfortunately, Albahri’s support for genocide of the Jews doesn’t reveal that she is a closet Nazi, but that she is an entirely mainstream Muslim. Genocidal statements are painfully common from Muslim leaders today. On January 29, Palestinian Authority TV, which is controlled by the ostensibly moderate Fatah faction of Palestinian Authority President Mahmoud Abbas, broadcast a Friday mosque sermon containing this reference to the notorious genocidal hadith in which Muhammad says that the end times would not come until Muslims started murdering Jews:

In the original hadith, Muhammad says that “the last hour would not come unless the Muslims will fight against the Jews and the Muslims would kill them until the Jews would hide themselves behind a stone or a tree and a stone or a tree would say: Muslim, or the servant of Allah, there is a Jew behind me; come and kill him; but the tree Gharqad would not say, for it is the tree of the Jews” (Sahih Muslim 6985).

If the “last hour” will not come until Muslims start murdering Jews wholesale, then what’s to prevent a pious young lady like Jumanah Imad Albahri from believing that speaking approvingly of the mass-murder of Jews, as Nasrallah did, is a holy and pious act?

“We have manufactured missiles that allow us, when necessary, to replace Israel in its entirety with a big holocaust.”

And on December 29, 2009, Muhammad Hussein Yaaqub, an Islamic cleric, dashed hopes for the usefulness of interfaith discussions when he said this on Egypt’s Al-Nas TV:

“The Jews are our enemies. Allah will annihilate them at our hands. This is something we know for certain. We know this for certain – not because I say so, but because Allah said so. ‘You shall find that the people strongest in enmity to the believers are the Jews and the polytheists.’”

“If the enemy reaches a stage in which it feels that it is paying a heavy price for its occupation – both in terms of human lives and in terms of resources – it will give up. Without this, there is no chance of reconciliation with the enemy. Therefore, I believe that the annihilation of Israel is easier than reconciliation with it. Annihilating Israel is easier than reconciling with it, because annihilating Israel through a long-term and consistent effort may bear fruit in a society that feels it is alien to this [Arab] world, and does not want to remain in a world that rejects by force.”

None of this should come as any surprise. The genocidal hadith quoted on Palestinian TV is just one element of an anti-Semitism that is deeply rooted in the Qur’an and Sunnah, and which runs through Islamic history with a remarkable consistency. The Qur’an portrays the Jews as the craftiest, most persistent, and most implacable enemies of the Muslims. Three notorious Qur’anic passages depict an angry Allah transforming Jews into apes and pigs: 2:63–66; 5:59–60; and 7:166. The first of those passages depicts Allah telling the Jews who “profaned the Sabbath”: “Be as apes despicable!” It goes on to say that these accursed ones serve “as a warning example for their time and for all times to come.” The second has Allah directing Muhammad to remind the “People of the Book” about “those who incurred the curse of Allah and His wrath, those of whom some He transformed into apes and swine, those who worshipped evil.” The third essentially repeats this, saying of the Sabbath-breaking Jews that when “in their insolence they transgressed (all) prohibitions,” Allah said to them, “Be ye apes, despised and rejected.”

In traditional Islamic theology these passages have not been considered to apply to all Jews. However, that hasn’t stopped contemporary jihadists from frequently referring to Jews as the “descendants of apes and swine.” The implication is that today’s Jews are bestial in character and are the enemies of Allah, just as the Sabbath-breakers were. The grand sheikh of Al-Azhar, Muhammad Sayyid Tantawi, the most respected cleric in the world among Sunni Muslims today, has called Jews “the enemies of Allah, descendants of apes and pigs.” Saudi sheikh Abd al-Rahman al-Sudayyis, imam of the principal mosque in the holiest city in Islam, Mecca, said in a sermon that Jews are “the scum of the human race, the rats of the world, the violators of pacts and agreements, the murderers of the prophets, and the offspring of apes and pigs.”

“The current behavior of the brothers of apes and pigs, their treachery, violation of agreements, and defiling of holy places … is connected with the deeds of their forefathers during the early period of Islam — which proves the great similarity between all the Jews living today and the Jews who lived at the dawn of Islam.”

A 1996 Hamas publication says that today’s Jews are bestial in spirit, and this is a manifestation of the punishment of their forefathers. In January 2007, Palestinian Authority president Mahmoud Abbas stated, “The sons of Israel are mentioned as those who are corrupting humanity on earth,” referring to Qur’an 5:64.

Likewise, Sheikh ‘Atiyyah Saqr, writing in Islam Online, declares of Jews that “Almighty Allah told us that He’d send to them people who’d pour on them rain of severe punishment that would last till the Day of Resurrection.” Then comes a threat:

“All this gives us glad tidings of the coming victory of Muslims over them once Muslims stick to strong faith and belief in Allah and adopt the modern means of technology.”

Modern means of technology? Perhaps a nuclear bomb exploded in Tel Aviv? If that happened, Jumanah Imad Albahri would by no means be the only Muslim who would thank Allah for his bounties.

David Horowitz at UCSD 5/10/2010. Hosted by Young Americans for Freedom and DHFC

Reasoning from the Scriptures with Muslims - Ron Rhodes (Book)