The pick positions the high court to have three women justices for the first time.

If confirmed, she would be the youngest member on the current court and the first justice in nearly four decades without any prior judicial experience. 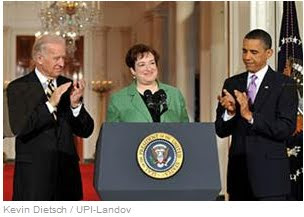 Kagan has advocated for an increased presidential role in regulation, which, she conceded, would make such affairs more and more an extension of the president's own policy and political agenda.

Writing in the Duke University law journal on the issue of the presidential role in regulation, Vanderbilt law professor James Blustein quoted Kagan extensively regarding her views on the issue. Blustein himself was President George W. Bush's pick to head the Office of Information and Regulatory Affairs, a position now filled by regulatory "czar" Cass Sunstein.

WND found that in his academic paper, Blustein quoted Kagan, formerly a senior member of President Clinton's White House domestic policy staff, asserting, "[W]e live today in an era of presidential administration," an assertion that, she acknowledged, might be "jarring" or "puzzling" to some.

Kagan argued, "Presidential control of administration, in critical respects, expanded dramatically during the Clinton years, making the regulatory activity of the executive branch agencies more and more an extension of the president's own policy and political agenda."

Kagan herself, writing in the Harvard Law Review in 2001, argued that an increased presidential role in regulation "both satisfies legal requirements and promotes the values of administrative accountability and effectiveness."

Kagan is U.S. solicitor general, after being nominated by Obama in January and confirmed by the U.S. Senate in March. She was a dean of Harvard Law School and previously served alongside Obama as a professor of law at the University of Chicago.

A former clerk to Abner Mikva at the D.C. federal appeals court, Kagan was heavily involved in promoting the health-care policy of the Clinton administration.

Obama praised her because while he said a "judge's job is to interpret the law, not make the law," she has evidenced a "keen understanding of the impact of the law on people's lives."

The president said she has a "firm grasp on the nexus and boundaries between our three branches of government."

But more importantly, she understands, "behind the law there are stories, stories of people's lives," Obama said.

Kagan said the law is "endlessly interesting" and also "protects the most fundamental rights and freedoms."

However, there was evidence that the nomination will draw the opposition of members of faith organizations.

The Christian ministry Pray In Jesus Name.org already had announced a petition to generate opposition to Kagan.

The petition effort noted Kagan's bold criticism as dean of Harvard Law of federal policy and her objections to the "don't ask, don't tell" process that included throwing military recruiters off campus.

Also, arguing before the Supreme Court on behalf of the Defense of Marriage Act, she said it should be overturned.

"Needless to say, Kagan is a bomb-thrower, who would rule as a pro-homosexual, pro-abortion, anti-Christian activist, and she must be filibustered if nominated," wrote the petition organization, which is sending senators petitions opposing Kagan.

But Kagan, who would replace the retiring Justice John Paul Stevens, 90, likely will be affirmed, according to the forecast from Manuel Miranda, chief of the Third Branch Conference.

He told NBC, "Probably no nominee would have been filibustered. The notion of a filibuster is a distraction. The real issue becomes how heavily she'll be scrutinized and how great an investment in time will Republicans invest."

With six Catholics and two other Jews on the court, as a Jew her affirmation by the Senate would leave the court with no Protestants, the most prevalent faith in the nation.

She is unmarried and CBS News wrote during the time Obama was interviewing for the post that she would be the "first openly gay justice."

However, that report later was pulled after the CBS reporter who blogged about it wrote, "I have to correct my text here to say that Kagan is apparently still closeted – odd, because her female partner is rather well known in Harvard circles."

She has been identified by LifeNews.com as an ardent pro-abortion advocate.

Sen. John Cornyn, a pro-life Texas Republican, said the nation "deserves a Supreme Court nominee who is committed to deciding cases impartially based on the law, not on personal politics, preferences, or what's in the nominee's 'heart.'"

According to Pray In Jesus Name, Wendy Wright of Concerned Women for America has raised alarms that Kagan "treated pro-life activists like violent criminals, creating a task force in the Department of Justice and a grand jury to investigate peaceful pro-lifers. This raises serious concerns that she shares the hostile view that religious beliefs are a form of 'hate.'"

At Move America Forward, spokesman Danny Gonzalez said military families and their supporters are unhappy with the choice.

"Kagan was the last person from Obama's short list that military personnel and their families want to see appointed to the Supreme Court. Not only has Kagan never even been a judge, she as a record of being radically anti-military," he wrote.

"President Obama should be appointing to the Supreme Court only those who truly appreciate the heroism and contribution to our freedom we get from the United States military. Kagan fails that test, and we hope she will be summarily rejected in confirmation by the United States Senate,” said Gonzalez

The American Center for Law and Justice, which focuses on constitutional law, said Kagan's judicial philosophy needs to be examined in the Senate.

Jay Sekulow, chief counsel, said, "The fact that Elena Kagan has no previous judicial experience underscores the importance of closely examining her judicial philosophy – will she abide by the Constitution, or will she take an activist view? With the Senate's constitutional role of providing 'advice and consent' regarding nominees, we call on the Senate Judiciary Committee to provide full and thorough hearings and ask the tough questions about Kagan's past and how she views the role of Justices, the Constitution, and the rule of law. While no nominee should express legal opinions concerning specific issues, the American people deserve to know whether this nominee – which could serve for many decades – embraces the philosophy of judicial activism."

According to Tom Fitton, president of Judicial Watch, the selection of Kagan is "irresponsible."

"Kagan is a liberal activist and political operative with no experience as judge. A Supreme Court nominee ought to have significant practical experience as a lawyer or a judge – especially a nominee for the nation's highest court. Her decision to throw the military recruiters off of the campus of Harvard Law School during a time of war shows she is far to the left of mainstream America. The fact that she continued to work in the Clinton White House after it became clear that President Clinton lied under oath raises questions about her ethical judgment. And her record, as spotty as it is, shows that Ms. Kagan is a committed liberal judicial activist," he said.

Added Rep. John Boehner, R-Ohio, the House Republican leader, "Given her lack of judicial experience, or time spent as a practicing lawyer, other aspects of her record must be thoroughly examined, including her troubling decision to ban united States Armed Forces recruiters from Harvard Law School."

"Judges should interpret, not make the law. The Senate should press hard to question Elena Kagan on her judicial philosophy. The public deserves to know whether Kagan will use her transnational law philosophy as a lens through which she views the Constitution. And the public needs to know whether her personal views will trump the Constitution, as they appeared to do when she banned military recruiters from campus," he said.

Kagan's views on presidential control of regulation seem to echo those of controversial regulatory "czar" Cass Sunstein, who went so far as to argue the interpretation of federal law should be made not by judges but by the beliefs and commitments of the U.S. president and those around him, WND reported.

"There is no reason to believe that in the face of statutory ambiguity, the meaning of federal law should be settled by the inclinations and predispositions of federal judges. The outcome should instead depend on the commitments and beliefs of the president and those who operate under him," argued Sunstein.

This statement was the central thesis of Sunstein's 2006 Yale Law School paper, "Beyond Marbury: The Executive's Power to Say What the Law Is." The paper, in which he argues the president and his advisers should be the ones to interpret federal laws, was obtained and reviewed by WND.

Sunstein debated the precedent-setting 1803 case, Marbury v. Madison, which determined it is "emphatically the province and duty of the judicial department to say what the law is."

He lamented multiple recent examples of U.S. presidents interpreting law only to have their interpretations overturned by the Supreme Court.

He concludes, "The executive should usually be permitted to interpret (law) as it reasonably sees fit."

"The allocation of law-interpreting power to the executive fits admirably well with the twentieth-century shift from common law courts to regulatory administration if the governing statute is ambiguous," he writes.