Conservatives and liberals alike have expressed reservations about President Obama's Supreme Court nominee Elena Kagan, the former dean of Harvard Law School and current Solicitor General. That Kagan is a bright woman is certain, but some liberals are concerned that she's too much of a "blank slate" about whom the public knows very little. Conservatives, on the other hand, feel that the public knows plenty - that Kagan is a staunch liberal with strong pro-abortion and pro-gay rights views. 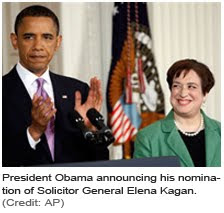 US Supreme Court nominees generate a lot of press for two important reasons. First, these nine men and women make the ultimate decisions on cases that can affect US law for centuries to come. The second reason is that Supreme Court justices stick around awhile. Senators can get kicked out after six years, but Supreme Court justices are like the Energizer Bunny - their careers just keep going and going. A good example is Justice John Paul Stevens whom Elena Kagan has been nominated to replace; Stevens took his Supreme Court seat clear back in 1975.

It is therefore important for Americans to know a lot about the folks the Senate might confirm to the nation's highest court. Elena Kagan just turned 50 years old in late April, giving her a potential 30 year career as a Supreme Court justice. The fact that people know very little about Elena Kagan's actual constitutional philosophy or legal views causes concern. She also does not have much court experience. She did serve as a law clerk for Justice Thurgood Marshall early in her career, but prior to her taking on the role of Solicitor General last year, Kagan had never argued a case at trial, let alone served as a judge.

Kagan does have a decidedly liberal political worldview. She's served in the administrations of two Democratic presidents and has showed signs of supporting basic Democratic and liberal political positions. While the dean at Harvard Law, Kagan banned military recruiters from the school because she considered the military's Don't Ask Don't Tell policy to be a "moral injustice" of discrimination against gays and lesbians.

Kagan also has shown disapproval for pro-life causes and her nomination has the full support of Planned Parenthood. According to LifeNews.com, Kagan wrote an article for the Daily Princetonian in which she disparaged pro-life candidates after Reagan won the 1980 election, calling them, "avengers of ‘innocent life’" who were "beneficiaries of a general turn to the right and a profound disorganization on the left." She placed the term 'innocent life' in quotes, indicating that she did not agree with the view that unborn children are 'life'.

Dr. Kevin Roberts, executive director of Catholic Families for America, related Kagan's nomination to an anti-family presidential agenda, describing Kagan as someone, "actively hostile to traditional marriage and to the unborn."

Liberals are not entirely pleased with Kagan, however. Not only is she untried and unexperienced in the courtroom, but she has argued in support of holding prisoners of war, like Al Qaida terrorists, and detaining them without trial for an indefinite amount of time outside the traditional field of battle.

In 1997, when Kagan served as Associate White House Counsel to Bill Clinton, Kagan and her boss Bruce Reed urged the President to sign a weaker Democratic version of the partial birth abortion ban lest the Republican Congress pass something stronger and override his veto. Their memo read, "We recommend that you endorse the Daschle amendment in order to sustain your credibility on HR 1122 and prevent Congress from overriding your veto."

Some have pointed to this memo as evidence that Kagan's pro-abortion position is not solid. However, rather than demonstrating any pro-life leaning, it shows that Kagan is dedicated to consensus and uses compromise as a way to reach agreements. This characteristic alone tells a great deal about how she would work as a Supreme Court justice. On one hand she will likely work to bring balance to a divided court and reach across the ideological aisle to work through tough decisions. On the other hand, her decisions may turn out to be luke-warm and full of compromise when the Court needs a strong, solid legal voice.

We Have to Talk About Elena Kagan - The New Media Journal