(AP) A U.S.-funded program to restore the ruins of Iraq’s ancient city of Babylon is threatened by a dispute among Iraqi officials over whether the priority should be preserving the site or making money off it.

Local officials want swift work done to restore the crumbling ruins and start building restaurants and gift shops to draw in tourists, while antiquities officials in Baghdad favor a more painstaking approach to avoid the gaudy restoration mistakes of the past. 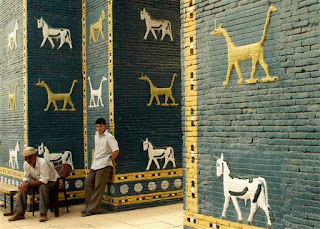 The ruins of the millennia-old city, famed for its Hanging Gardens and the Tower of Babel, have suffered heavily over the past decades. Deep in Iraq’s verdant south, the cluster of excavated temples and palaces were mostly rebuilt by former ruler Saddam Hussein in the 1980s, using modern yellow brick to erect towering structures that marred the fragile remains of the original mud brick ruins. After Saddam’s fall in 2003, a U.S. military base on the site did further damage.

The site is filled with overgrown hillocks hiding the estimated 95 percent of the city that remains unexcavated — which archaeologists hope could eventually be uncovered.

But for that to happen, they argue, the slow and meticulous work needs to be done to train Iraqis in conservation and draw up a preservation plan that can be used to drum up international funds and get the site UNESCO World Heritage status.

A $700,000, two-year project to do that, funded by the U.S. State Department and carried out by the New York-based World Monuments Fund, began last year and if it succeeds, the Babylon project could be a model for saving other ancient sites in this country that witnessed the birth of urban civilization.

“I’m optimistic because what is happening in Babylon is the proper and scientific step and, God willing, the work in Babylon will open up new horizons,” said Qais Hussein Rashid, head of Iraq’s impoverished antiquities department.

Iraq calls for relief in its Gulf War reparation payments to Kuwait - Examiner.com