Whose Side Is God On?

Today, one of the greatest seductions is that there could be world peace if only the Palestinians had a homeland. So this month, a new film was launched titled "With God On Our Side." It is aimed at changing the end-time views of evangelicals and the theology that says the Jews are God's chosen people and have a divine right to the land of Israel. 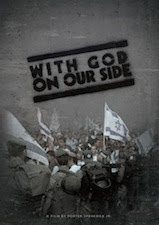 Porter Speakman, the movie's producer, explains that there is a biblical alternative for Christians who want to love and support the people of Israel. He says there is a theology that doesn't favor one people group over another but instead promotes peace and reconciliation for both Jews and Palestinians. That would be terrific if Palestinian leadership wanted peace with Israel. They don't. They want a one-state solution and the destruction of Israel. So whatever theology Speakman refers to is bogus.

"Palestinian Christians lived here for centuries in this land. Suddenly they meet Christian groups of people who say the Palestinians are obstacles to the Second Coming of Christ. You need to move out to make room for the Jewish Diaspora to come here."

Historical fact: No one urged Arabs living in the region to flee in 1948 and 1967 except Arab leaders themselves. This was for political purposes. Perhaps nowhere is historical revisionism more prominent than it is with issues surrounding the Jews, Israel, the Middle East conflict, and the Holocaust.

Mark Tooley of the Institute for Religion and Democracy states,

"Anti-Israel activists see American evangelicals as key to U.S. support for Israel. That is why they are targeting evangelicals with messages of pro-Palestinian solidarity as supposedly central to Christian compassion.

"The film's main message to evangelicals is that the old religious Right crassly imposed a pro-Israel U.S. foreign policy based on its end-time theology, creating untold suffering among largely innocent Palestinians. The film suggests that more thoughtful, more compassionate evangelicals, will reject that heritage and instead stand with the Palestinians as the victim group most needing Christian compassion."

"The film perpetuates a simplistic stereotype alleging that American evangelicals self-servingly only support Israel because a Jewish presence there is central to their blood-thirsty, apocalyptic dreams about the Second Coming of Jesus." I hope other evangelicals are as outraged as I am at being called "blood-thirsty!"

To sum it up, Israel and the U.S. are nasty imperialists, and Christian Zionist evangelicals only back the Jews because of perceived abused theology: God will bring the Jews back to the land. It rightfully belongs to them. The last days' scenario centers around the Jewish people and nation. Say folks, I say we can't change Scripture although many are trying to do so today!

What is true is that Palestinian leaders and the entire Arab world abuse them, not U.S. imperialism and anybody's end-time theology. Evangelicals are strong supporters of Islamic evangelism around the world. Many evangelical agencies have been raised up, particularly since 9/11, to reach out to lost Muslims, including Palestinians. One such organization is Joel Rosenberg's Joshua Fund.

The film "With God On Our Side" wants increased U.S. pressure on Israel to accommodate Palestinian demands, facilitated by reduced U.S. evangelical support for Israel. It just won't happen. We are smart enough to know that what they really want is Israel dismantled altogether in favor of a one-state solution: Palestine.

Just what exactly is "Christian Zionism?" It is a movement supporting the return of the Jewish people to their rightful homeland and the resumption of Jewish sovereignty in the land of Israel. Christians who fit into this category are almost exclusively evangelicals who believe God has a continuing special relationship with the Jews. He has a covenant with them that can never be broken. This is apart from the church. This is based on literal and futurist interpretation of the Bible and the conviction that Old Testament prophecies concerning the Jewish people are being fulfilled today in the State of Israel.

According to the film, "With God on Our Side," Christian Zionism and our strange theology have muddied the waters more than any other entity! So, along comes a man who cannot stand the stench of Israel, Stephen Sizer. He is a Church of England priest who has written several anti-Israel books and anti-Christian Zionist books including Christian Zionism: Roadmap to Armageddon and Zion's Christian Soldiers. Here are some more blood-thirsty images!

Sizer insists that the theology of Christian Zionists rejects some ethnic groups such as the Palestinians. He suggests we are using the lens of Bible prophecy and not the lens of justice. Most evangelicals will always choose the lens of the Bible so let Sizer bang his head against the wall in utter frustration. He has a great platform to do so on the program by the so-called "Bible Answerman", Hank Hanegraaff. Who are some championing this film? Those who usually side with religious Left causes including Tony Campolo, Jim Wallis, Brian McLaren, Steve Haas from World Vision, Gary Burge from Wheaton College, and more.

This film comes at a time when Barack Obama is going to try to impose a peace treaty between Israel and the Palestinians. Obama is behaving as though he were President of the World, dictating borders and treaties even if one side does not want to participate. He is about to clash with the Lord God of Israel and America may never be the same. What other sovereign nation would put up with this scenario? None.

Gen. David Petraeus has blamed the war on terror on Israel, saying that the perception in the Arab world is that America cannot "stand up to Israel." As a consequence of that perception, Petraeus said, America was losing support among the moderate Arab states. There are no moderate Arab states. But this is just one more American voice condemning our number-one ally and "the apple of God's eye" (Zechariah 2:8). There is now talk that Barack Obama is going to shut down Israel's nuclear program. What other nation would be on the receiving end of such abuse?

Some have concluded that Israel, while important, isn't that important to the United States. The administration has "dug in" on its position and maintains that any Jewish construction in Jerusalem is an "Israeli provocation" and that the price for "peace" is a Palestinian state ethnically cleansed of any Jewish presence.

So those behind this pathetic effort to demonize a group of Christian Zionists and, for that matter, demonize all of Israel, need to do a reality check. There are consequences. Covenants are involved: Genesis 17:6-7; Genesis 12:1-7; Psalm 105:8-15. God is on the side of those with whom He has covenants: Israel and believing Christians who call him Savior. He will never break a covenant. That you can count on. You and I are betting eternity on His trustworthiness. Watching Him perform His promises to Israel should give us great comfort!

The Eight Covenants of the Bible - Ariel Ministries (Arnold Fruchtenbaum)