What's Next for the Supreme Court?

US Supreme Court Justice John Paul Stevens will turn 90 next week, and Stevens wrote President Barack Obama on Friday informing the President of his intention to retire. The announcement makes clear that Obama will have a second chance to settle an ideological liberal into a Supreme Court seat, and while Stevens' summer departure date is still months away, the battles over his replacement have already ignited. 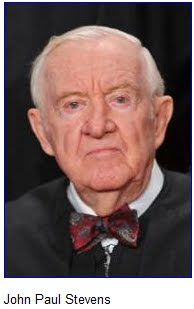 While he is known as the leader of the Court's liberal bloc, Justice Stevens was nominated to the Supreme Court by Republican President Gerald Ford in 1975. Ford appointed Stevens with the understanding that the Chicagoan was a moderate conservative – which, compared to the activist liberal justices on the court at the time, he was. During the past 35 years, though, as the court has grown more conservative, Stevens has voted more consistently with the liberal side of the Court. Stevens doesn't think he's changed in his position; he believes the Court has shifted and he's just stayed in place. In 2007 he said, "I don't think of myself as a liberal at all." He laughed and shook his head. "I think as part of my general politics, I'm pretty darn conservative."

Stevens has proved an interesting justice. He has generally voted to protect personal rights against the incursion of the government over and over again, even if those personal rights could be considered morally repugnant. In Ashcroft v. Free Speech Coalition (2001), he voted with the Court to overturn the Child Pornography Prevention Act of 1996 as too broad. He voted on behalf of Planned Parenthood in Planned Parenthood v. Casey (1991), in which the Court argued that requiring a woman to notify her husband prior to getting an abortion placed an "undue burden" on her.

"The ideas of liberty and equality have been an irresistible force in motivating leaders like Patrick Henry, Susan B. Anthony, and Abraham Lincoln, schoolteachers like Nathan Hale and Booker T. Washington, the Philippine Scouts who fought at Bataan, and the soldiers who scaled the bluff at Omaha Beach. If those ideas are worth fighting for — and our history demonstrates that they are — it cannot be true that the flag that uniquely symbolizes their power is not itself worthy of protection from unnecessary desecration."

Today's climate is far hotter than it was in 1975, and replacing Stevens will prove a far fiercer struggle than putting him on the Court in the first place. In 1975, President Ford said he was looking for "the finest legal mind I could find," and the Senate confirmed Stevens 98-0. Justice Stevens stepped into his seat without a great deal of fanfare. Now, though, the country is polarized into strong liberal and conservative camps. A wide variety of interest groups want the next Supreme Court justice to represent them. Some people are looking for somebody who is Hindu or Buddhist, anything but Protestant. Others want an Asian American or Native American justice.

"The president now has an opportunity to name a worthy successor who will stand up for equal justice for all, not just the wealthy or powerful," said Nan Aron, president of Alliance for Justice.

"The court needs a consensus-builder just as much as it needs a progressive firebrand," said Doug Kendall, president of the liberal Constitutional Accountability Center.

"We call on President Obama to nominate a woman to fill this seat," said National Organization for Women President Terry O'Neill. "The Supreme Court is out of balance, with women making up a mere 22 percent of the bench. That's simply not enough."

The fact is, Supreme Court justices are not supposed to represent any specific group of people. They are not Congress. Regardless of their ethnicity or religion or gender, the justices are responsible to judge cases according to the Constitution without bias. Since these nine seats are filled by human beings, however, personal philosophies do come into play. The judicial philosophies of the justices do affect the way they have ruled on divisive cases. Liberal judges like Ruth Bader Ginsburg and Stephen Breyer treat the Constitution as a "living document", the meaning of which can be adjusted to fit the changing times. Conservatives Antonin Scalia, Clarence Thomas, Samuel Alito and Chief Justice John Roberts hold to the position that the Constitution is a legal document, to be interpreted according to the meaning of the words in the document regardless of the political emotions of the day.

Speculations about the identity of Obama's next Supreme Court nominee have lit up the media. Conservatives fear he will nominate a radical leftist. Liberals worry he will choose somebody too moderate. Some people speculate that Obama's pick will be somebody without any judicial experience in order to give the Court some fresh perspective. At least one name is off the list for now; Hilary Rodham Clinton will not be nominated, the White House said Monday.

The nine Supreme Court justices make up the third branch of the US Federal Government and have as much influence on the government as Congress or the President. Only five of those justices need to agree on any one decision, and they have the power to set precedent and affect US law into the distant future, long beyond their own lifetimes. The expected bloody battles in the Senate this summer will reflect the significance of Obama and the Senate's final decision in this "one nation", but polarized, America.

The next Supreme Court justice - Economist