In an unprecedented move, the U.S. has been conducting negotiations with Israel on behalf of the Palestinian Authority, according to a senior PA negotiator and sources in the Israeli government.

The U.S. has been calling for the resumption of indirect talks, with Obama administration officials publicly proposing to serve as a go-between to facilitate dialogue between Israel and the PA.

Sources in both the PA and Israeli government told WND talks are underway on a number of issues, including future borders and security controls for a Palestinian state.

A senior PA negotiator, speaking on condition of anonymity, said rather than act as an intermediary, the U.S. has been negotiating with Israel on behalf of the PA, assuming all Palestinian positions and bargaining with Israel from the Palestinian side.

The account was confirmed with sources in the Israeli government, who said such behavior by the U.S. government is unprecedented. 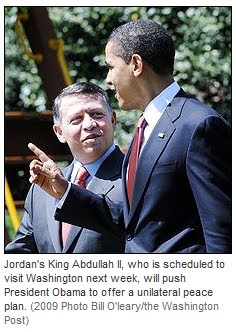 The comments follow a Washington Post story that Obama is weighing the possibility of submitting a new U.S. Middle East peace plan by this fall that would include talks between Israel, Jordan, the PA and Syria. The plan would reportedly link Israeli-Palestinian peace to efforts to confront Iran over its nuclear program.

"We want to get the debate away from settlements and East Jerusalem and take it to a 30,000-feet level that can involve Jordan, Syria and other countries in the region," one official told Ignatius.

But a senior PA negotiator told WND Erekat was referring to Israeli opposition to a Palestinian demand to freeze all Jewish construction in eastern Jerusalem.

The negotiator said the PA is "pleased" with the position taken by the Obama administration on Israeli-Palestinian issues.

Discussions, but no decisions, on an Obama plan for Mideast peace - Washington Post