Obama Bets It All on Kandahar

President Obama is betting his “war of necessity” on the outcome of the pending battle for Kandahar, Afghanistan’s second largest city. Failing to secure and then provide good governance for that million person city by this December will be the death knell for the President’s time-line which is essential to his entire Afghan strategy.

Last December, Obama outlined his strategy in a speech at West Point. He promised a 30,000 man surge of fresh troops “will allow us to accelerate handing over responsibility to Afghan forces, and allow us to begin the transfer of our forces out of Afghanistan in July 2011.”

But Kandahar could defeat Obama’s ambitious timeline because the Afghans are either unprepared and or unwilling to do what’s necessary to transform that city.

Kandahar is the spiritual heartland of the insurgency. Adm. Mike Mullen, chairman of the U.S. Joint Chiefs of Staff, labeled it the “center of gravity” for reversing Taliban momentum and cast the pending battle as a make-or-break campaign that will determine whether the U.S.-led counterinsurgency can succeed.

The battle for Kandahar is part of a year-long campaign to retake Southern Afghanistan called Operation Omid – the Pashto word for hope. The two-pronged operation includes ridding the city of Taliban forces and then establishing effective governance.

The military phase will be different than the recent offensive in nearby Marjah because Kandahar is larger and heavily populated. Like Marjah, this operation was announced beforehand to garner local buy-in and hopefully force-out Taliban shadow governments.

The kinetic effort began two months ago with the targeting of Taliban leaders and efforts to secure transit routes into the metro area. The next phase will begin late spring involving a “body blow” to the Taliban delivered by Afghan forces supported by two U.S. combat brigades. They will take control of the main highways and then gradually “squeeze” the insurgents out of the city.

A parallel political drive will seek to heal tribal fissures by winning the hearts and minds of the people.

“The specific objective is to make the Afghan government a more viable option for people,” says Frank Ruggiero, a State Department official in Afghanistan. “It’s to show that the government has more relevance to their lives vis-à-vis the shadow governance of the Taliban.”

But no matter how well American forces fight, success in Kandahar depends on four Afghan-centric contributions that will likely doom the effort. 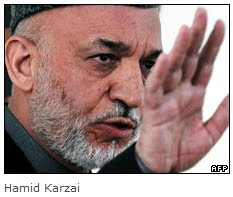 First, Afghan President Ahmed Karzai is unlikely to make a meaningful contribution to the Kandahar transformation. Adm. Mullen said Obama’s Afghan strategy will fail unless Karzai reins in corruption and improves the government in Kandahar. But Karzai has failed to do either in Kabul and there’s little reason to expect he’ll do any better for Kandahar.

Last August, Karzai won a fraud-marred election. He still hasn’t selected a full cabinet and his government is impotent outside of Kabul. That’s why Obama came to Kabul last week. He demanded Karzai’s cooperation fighting corruption and the Taliban. But days later Karzai gave a speech critical of the West, saying it wants a “puppet government” and of orchestrating fraud in last year’s election. “They want me to be an illegitimate president,” said Karzai.

Peter Galbraith, the deputy United Nations special representative to Afghanistan, responded to Karzai’s fraud allegations. “It underscores why he is not likely to reform and therefore cannot be a credible partner,” said Galbraith. “He’s slipping away from the West,” said a senior European diplomat in Kabul.

Karzai is evidently slipping into radical arms and isn’t to be trusted. In March, Karzai warmly received radical anti-American Iranian President Mahmoud Ahmadinejad for an official visit to Kabul and a week ago the duo met again in Tehran.

Second, the Kandahar operation puts Afghan security forces in the lead before they are ready. The Afghan army, which is U.S. trained, is improving but the Afghan National Police (ANP), which must play a critical role in Kandahar, is far from ready.

Gen. Sir David Richards, the head of the British army and the former commander of NATO forces in Afghanistan, said it will take until 2015 before the ANP are fully functional. Recently, a British press report cited a leaked government assessment of the ANP which indicates those forces are plagued with widespread incompetence, criminality and absenteeism up to 25%.

The International Crisis Group (ISG), a non-governmental organization, found the ANP’s misuse of power is so pervasive that “Afghanistan’s citizens often view the police more as a source of fear than of security.” In 2009, Mark Schneider, ISG’s vice president, testified about the “total collapse of the national police, with a widespread culture of impunity.” There are reports of theft and unauthorized resale of weapons by policemen such as an Afghan police commander who allegedly sold weapons to the enemy.

Third, Kandahar’s clerics won’t publicly support the campaign. “Our society is religious,” says prominent Kandahar poet Abdul Qadim Patyal, “and most of the time when a cleric says something, people accept it without thinking.” But Kandahar’s clerical community is silenced by the Taliban and is unlikely to speak in favor of a new government until the threat is removed.

The Taliban warns “you preach for the government; stop or we will kill you,” says Maulvi Hekmatullah Hekmat, deputy chief of Kandahar’s top Islamic religious authority, the Ulema Council. Twenty-three of the council’s 50 members have been assassinated by the insurgents and the survivors fled to Kandahar’s military cantonment. Silencing the moderates has given the Taliban a near-monopoly on interpreting Islam, which the population obeys.

Finally, the people don’t trust the current weak and corrupt provincial government so they turned to the Taliban, who brought a sense of brutal justice. Those intending to impose a new government must answer the question: Can Afghans who turned to the Taliban out of frustration with their corrupt government be convinced they can now get a better deal with a new Kabul-installed government?

Shaking up the current government could open a power vacuum that would be exploited by the Taliban. That is unless outsiders who command respect are brought in to run that government, an unlikely outcome, or new leaders are found from among the city’s residence.

But most of the current leaders are tainted with corruption, especially Ahmed Wali Karzai, the leader of the provincial council and brother of Afghanistan’s president. “Watch what the Americans do,” said a diplomat in Kabul. “If they let Ahmed Wali stay in power, it means they are not serious about governance.”

It would be difficult to ignore this man. Karzai is the principle power broker in the province and enjoys the governor’s endorsement. “He’s the guy who will keep Kandahar stable,” Tooryalai Wesa, the provincial governor said. “If he’s not here on the scene you don’t want to see what’s going to happen.”

U.S. officials failed to persuade President Karzai to move his brother out of the province to make room for untainted leadership. That means Ahmed Wali and his corrupt associates will once again run Kandahar, virtually sealing the city’s fate.

The operation to transform Kandahar is all but doomed: President Karzai seems incapable or unwilling to help. The police won’t be ready for years. The clerics are too afraid to tell the people what to think. And the new government leaders will come from a tainted pool of candidates.

On March 28, Obama told our troops at Bagram airfield, “You will be backed up by a clear mission and the right strategy.” That may be true but it’s evident we lack a dependable ally which makes this a hopeless effort.