"It takes 20 years to build a reputation and five minutes to ruin it. If you think about that, you'll do things differently." - Warren Buffett

The average American may not be able to immediately bring his face to mind, or know exactly what he does, but Warren Buffett is a name familiar across our country and throughout the world as synonymous with investment and high finance. Admiringly dubbed "The Oracle of Omaha," 73-year-old Buffett currently holds the title of Third Richest Man in the World and is founder, CEO, and Chairman of Berkshire Hathaway, an investment brokerage firm with perhaps the most astoundingly successful portfolios in US history. 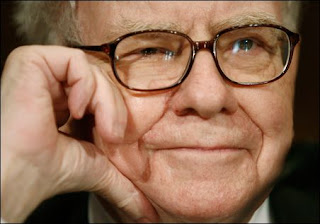 Buffett has his hands in everything from GEICO to Dairy Queen to Goldman Sachs, from Burlington Northern Railways and Benjamin Moore Paints to Coca-Cola, Nebraska Furniture Mart, KRAFT Foods and even Pampered Chef. Buffett stakes a claim in them all, and many more, by either buying out all stock or by being primary shareholder in each concern. What's more, Buffett is a self-made billionaire, having earned his assets and influence from the bottom up, and in his roles as financial advisor, philanthropist, CEO, and chair of multiple boards and companies, has earned the reputation as arguably the most successful investor in all of American history. He is an investing phenomenon.

Warren Edward Buffett was born in Omaha, Nebraska on August 30th, 1930 to Leila Stahl Buffett and investor-turned-politician Howard Buffett. He is the middle child of the family's three offspring, and the only son. Buffett's father operated his own stock brokerage firm, and young Warren demonstrated a startling aptitude for calculations, hard work, and turning a profit at a very early age. When his father was elected to Congress and the family moved to Washington, DC in 1942, Warren was given a chance to access the world of political activism and view the economic and financial advisory aspect of government.

At age six, Buffett began his first business of re-selling bottles of Coca-Cola from his grandfather's grocery store door-to-door in his neighborhood. Like many children, he earned money by holding paper routes. Unlike most children, he used money from his three paper routes to purchase a piece of real estate in the form of Nebraska farmland at age 14. He rented out the farm and collected rent. At age 11, Buffett bought his first stock - six shares of Cities Service Preferred - from his father's brokerage firm. The stock greatly decreased in value, and when it rebounded, he sold it for six dollars in profit. A short time later, the stocks rose to $200 each. He thereby learned his first, and perhaps most vital, lesson in investing: patience in waiting out the inevitable ups and downs of "Mr. Market."

At Columbia University, Buffett became a devoted student under investment guru Ben Graham and the only student to ever receive an A+ in one of Graham's classes. Graham was chairman of a then unknown insurance company, GEICO, which Buffett became fascinated with and decided to visit. When let in by a janitor, Buffett found the auto insurer's Financial Vice President at work and began a four-hour discussion regarding GEICO's business practices. Buffett would, over the years, come to work for and buy out the insurance vendor, turning it into a nationally recognized entity under his investment powerhouse, Berkshire Hathaway.

Buffett's most recent acquisitions include his February 2010 purchase of all remaining Burlington Northern Santa Fe Railway shares. The BNSF buyout became Berkshire Hathaway's biggest investment in its history, and as with nearly every stock Buffett purchases, market prices jumped afterward. "Our country's prosperity depends on it having an efficient and well-maintained rail system," Buffett told the press, and Buffett eagerly looks toward the growth and continued US reliance upon railway transport over the next century.

"Since 1790, this (the USA and its economy) is the wonder of the world," Buffett was quoted by USA Today's Dan Reed in March. "The ingredients of that have not disappeared from this world; 9/11 and all sorts of things have come and gone, but the United States' success story isn't over." Buffett's characteristic belief in responsible free enterprise and the vast network of American commerce lent strength to his massive railway investment, which he called an "all-in wager on the economic future of the United States."

Buffett firmly believes in personal character, sound business practice, solid management, and frugal governance from deep within the foundations of a corporation, not just bottom-line analysis and profit by dollar amounts alone. He believes in investing in American-made products, goods, utilities and raw materials, rather than in trends.

Yet, in all his success and good-doing, Buffett does not acknowledge the God who has given him the ability to gain wealth. Buffett was raised Presbyterian, but now considers himself agnostic. His daughter Susie A Buffett is chair of The Susan Thompson Buffett Foundation, which focuses on population control and provides large amounts of money to Planned Parenthood and family planning clinics on university campuses and elsewhere across the US, providing funding for abortions - which Susan and Warren Buffett heavily campaigned to promote throughout the 1960's.

Americans can stand to learn a few things from Warren Buffett. He works hard and makes decisions based on long-distance value rather than immediate gratification. Yet, he has thus far failed to appreciate the value of the greatest long-distance investment of all – a true relationship with the King of the Universe. If that doesn't change for him, all the riches of this life will come to mean nothing, and the poorest Christian dying in the slums will be better off than he is.

"For what is a man profited, if he shall gain the whole world, and lose his own soul? or what shall a man give in exchange for his soul?" - Matthew 16:26

"But lay up for yourselves treasures in heaven, where neither moth nor rust doth corrupt, and where thieves do not break through nor steal:" - Matthew 6:20