[W]e will achieve our destiny to be as a shining city on a hill for all mankind to see. – Ronald Wilson Reagan

Our nation is chosen by God and commissioned by history to be a model to the world. – George Walker Bush

America does not presume to know what is best for everyone. – Barack Hussein Obama (Insert deflating balloon effect here.) 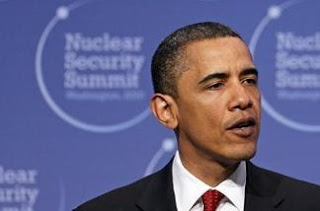 We have a president loath to acknowledge American exceptionalism. Indeed, the weight of the evidence suggests that our chief executive, through both word and deed and with malice aforethought, seeks to undermine – if not dismantle – that exceptionalism. At one time we properly called such activity anti-American, seditious or even – under certain circumstances – treasonous. Today we call it "progressive."

Abraham Lincoln – also from the Prairie State – perhaps forecast his presidential progeny when he observed: "America will never be destroyed from the outside. If we falter and lose our freedoms, it will be because we destroyed ourselves."

We are destroying ourselves. Of course, by "we" I mean those egalitarian ideologues who presently control the reins of government: liberals in Congress, President Obama and his stable of cracked czars and policy advisers. Their demonstrated antipathy toward America's uniquely grand place among world nations is unambiguous.

Consider comments made recently by John "forced abortion" Holdren, Obama's science czar, to students at the American Association for the Advancement of Science. In a rallying cry that could only be mustered by a true patriot, Holdren proclaimed: "[America] can't expect to be number one in everything indefinitely." (Self-fulfilling prophecy, anyone? Go team! That'll sure fire 'em-up before they hit the field.)

But what's most outrageous is the demonstrable reality that Obama's legislative agenda is intentionally designed to do just that – to ensure that America devolves to the lowest common denominator, lining-up as but another "also-ran" in today's neo-Marxist, internationalist horse race.

In addition to his humiliating world apology tour, the president recently gave us a sneak peak into this egalitarian mindset while preaching to the choir at his April 12 Nuclear Security Summit: "Whether we like it or not, we (the United States) remain a dominant military superpower," he said.

"Whether we like it or not"? That Obama would even preface recognition of America's precarious role as the "last remaining superpower" with "like it or not" betrays his fixed membership among the camp of self-loathing "or nots."

I've been reluctant to climb aboard the "Obama wants to destroy America" conspiracy train. I'm no longer reticent to do so. As Newt Gingrich recently observed, we know this administration to be "far and away the most radical administration in American history."

Although he may not seek to destroy America outright, we can only conclude – based upon his grossly irrational and irresponsible governance – that Obama remains determined to destroy America both as we know her and as our Founding Fathers intended her.

It's our own fault, really (by "our" I mean "you" if you voted for him). We should have taken this radical ideologue at his radical word.

Remember? During his Inaugural Address, Obama promised to "begin again the work of remaking America." That's "remake" America, not "improve" America or even "reform" America. It has always been this man's "hope" to "change" our nation by wiping clean the slate – "remaking" an America in his own secular-humanist, neo-Marxist self-image.

And that's exactly what he's doing. Obama has embarked upon the most brazen, slash-and-burn socialist restructuring scheme in our nation's history. This president is many things, but he's not stupid. He knows full well that his massive government takeover of health care, coupled with his global warmist "cap-and-trade" tax scheme – and his broader tax-and-spend-during-deep-recession game of economic Russian roulette – are undeniably unsustainable.

It's already happening. AT&T, Verizon, Deere and Caterpillar are but the first among an anticipated cavalcade of major corporations expecting to suffer a multi-billion dollar bloodbath at the hands of Obamacare – merely one of the president's radically sweeping, game-changing initiatives. (Congratulations, Mr. President.) As every good Marxist knows – to include the "man-child president" (as dubbed by Rush Limbaugh) – it's all unsustainable. Scary thing is: It'll work if they're not stopped at the ballot box come November.

As reported by FoxNews.com: "'The future of the economic might of this nation is at stake,' Jim Kessler, vice president for policy at Third Way bluntly observes.

"President Obama's budget forecast for the next decade (grossly underestimated) projects an additional $10 trillion in deficit spending, more than doubling the current national debt to a staggering $20 trillion.

"The gloomy forecast leads some analysts like former Congressional Budget Office Director Douglas Holtz-Eakin to suggest our economy is headed for a cliff.

"'This looks like Thelma and Louise to me. I mean, you know, there's the Grand Canyon and we're going to hit the accelerator. Why? You should hit the brake and then turn the car around."

But Thelma and Louise never intended to turn the car around.

Neither does Barack Obama.

There's no other way to say it. As goes the war to preserve liberty, national sovereignty, national solvency and American exceptionalism: Intelligence suggests we have an enemy within.