I would love to have overheard the Bible study Y'shua (Jesus) gave His disciples just after He rose from the dead:

"Then He said to them, "These are the words which I spoke to you while I was still with you, that all things must be fulfilled which were written in the Law of Moses and the Prophets and the Psalms concerning Me. And He opened their understanding, that they might comprehend the Scriptures." (Luke 24:44-45)

Have you ever wondered which Scriptures Jesus opened up during this discipleship session — especially which Psalms He referenced? I believe that one of them had to be Psalm 16, a beautiful song of David and a powerful anticipation of the Savior's resurrection. How appropriate for us to meditate on that Psalm in this season, that God might also open our understanding to comprehend the Scriptures. 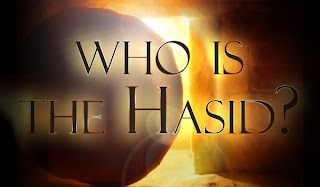 The key to understanding this Psalm is the ability to answer a very important question: Who is "The Hasid?" Psalm 16 is inscribed as a "Miktam of David." We don't know what the word Miktam means. Perhaps it was an ancient musical notation. What we do know is the other Miktams of David (Psalms 56-60) are "fugitive" Psalms; they were written while David was on the run from or facing attack from his enemies. In fact, it has been suggested that David's flight from Saul (see 1 Samuel 21:10f) provides the historical context for this Psalm.

Have you ever felt like the whole world was against you — That seemingly insurmountable challenges have left you beaten down, vulnerable and alone? That is what David was experiencing when he wrote this Psalm. In light of this, the confident tone of this Psalm is quite stunning: "Preserve me, O God, for in You I put my trust" (verse 1).

In the midst of such pressing difficulty, David's confidence was built on his trust in God. His life embodied a relationship of covenant submission to the One who alone had the power to preserve his life. Forced to flee, having lost his security, his home and loved ones, David laid claim to the only sure possession he had left: "O LORD, You are the portion of my inheritance and my cup (verse 5).

Aaron the priest had been told by God, "You shall have no inheritance in their land, nor shall you have any portion among them; I am your portion and your inheritance among the children of Israel" (Numbers 18:20). So too, David knew that he didn't need land or possessions to have a lasting inheritance. God was his portion.

At times it may be natural to feel like we don't know which way to turn or whom we can trust. But amazingly, David evidenced no uncertainty about his direction or his destiny:

"I have set the LORD always before me; because He is at my right hand I shall not be moved" (verse 8). When you don't know which way to turn or which way you might be headed, there is one way to be sure of your direction in life. Keep the Lord directly in front of you, face to face; and rest assured He is at your side, by your right hand as well. There can be no better GPS on the road of life.

So it is no wonder that David's confidence extended beyond this temporal plane with all of its trouble and woe, to a hope that passes beyond this life into the next. If the Lord is at your right hand in this life, you can know that one day, you will arrive at His right hand as well, where there is an amazing array of pleasures forevermore (Verse 11).

But how do we journey from this life into the next with the same kind of confidence David expressed? The answer is found in the hope of the resurrection: "For You will not leave my soul in Sheol, nor will You allow Your Holy One [Hasid] to see corruption" (verse 10).

While hasid is translated holy one, it comes from the Hebrew root hesed, meaning mercy or grace. A Hasid is one who has become the recipient of God's grace. The Psalm announces that the Lord's chasdika, His hasid, His holy one, would not remain in the grave, subject to a permanent state of corruption.

David didn't doubt that he would face death one day. Sooner or later he was destined for Sheol, (here referring not to hell but rather to the grave). Everyone dies. We all know that. David knew that. But he also knew that God would not leave him there. Death, the grave, corruption — these are not the final destination of those who put their hope in God.

How did David command such amazing confidence in a future life beyond the grave? He saw in his own life a foreshadowing of the Messianic hope.

David knew himself to be a hasid with a small "h." He refers to himself that way in other Scripture passages, including 2 Samuel 22:26 and Psalm 4:3. But just as the Bible uses certain terms like the Lord's "servant" and His "anointed one" prophetically to anticipate a one who will more fully embody those terms, so the Scripture uses the term hasid. It also anticipates the fulfillment of the person, office and mission of the holy One who was yet to come when David wrote this Psalm. David's life supernaturally foreshadowed the life of the Messiah.

David did go to the grave, he did see corruption, but the promise he stood for did not, could not die. Surely this was part of Jesus' teaching to His disciples after his resurrection. That resurrection was proof positive that Y'shua was indeed the Holy One who would not remain in the grave, the Hasid who would not see corruption. Having heard this teaching from the lips of the Savior, Peter confidently stood up to preach on the feast of First Fruits, the day of Pentecost, a day that according to Jewish tradition marks both the birthday of King David as well as the anniversary of his death. And this is what Peter said:

"Men and brethren, let me speak freely to you of the patriarch David, that he is both dead and buried, and his tomb is with us to this day. Therefore, being a prophet, and knowing that God had sworn an oath to him that of the fruit of his body, according to the flesh, He would raise up the Christ [Messiah] to sit on his throne, he, foreseeing this, spoke concerning the resurrection of the Christ, that His soul was not left in Hades, nor did His flesh see corruption. This Jesus God has raised up" (Acts 2:29-32).

In other words, if David is dead and buried in a nearby grave then the promise he spoke of in Psalm 16 must be fully realized in yet another Hasid — none other than Y'shua Ha Mashiach, Jesus the Messiah. The Apostle Paul later made the exact same argument at a synagogue in Antioch of Pisidia (Acts 13:32-39).

David, a holy one of God had unfettered confidence in his own future resurrection because it was rooted and grounded in the promise of the resurrection of another holy one, the Hasid, Messiah Jesus. In the same way, we who are the holy ones of God in this present age can look forward to our own resurrection in the future because Christ is risen from the grave.

"Blessed be the God and Father of our Lord Jesus Christ, who according to His abundant mercy has begotten us again to a living hope through the resurrection of Jesus Christ from the dead" (1 Peter1:3). Come, all holy ones of the God of grace and let us joyfully proclaim with one voice: "Christ is Risen! He is Risen indeed!"

The Implications of the Resurrection - SpiritAndTruth.org (Andy Woods)

Why Did the Messiah Have to Die? - Ariel Ministries (Arnold Fruchtenbaum)