The Secretary General of the UN, Ban Ki Moon, expressed sorrow, but gave a very restrained response to the news that a Moslem Nigerian mob brutally slaughtered hundreds of Christians with axes, knives and machetes as the Christians tried to escape their small villages in Central Nigeria.

Reports of the number of dead ranges from nearly 400 to over 500 in this center setting of Nigeria, Africa's most populous nation with over 150 million people in a nation that is equally split between the mostly Moslem North and the chiefly Christian South. This Moslem slaughter of Christians may have been the result of the struggle for control of the fertile, agricultural areas in the center section of Nigeria. 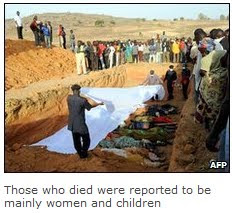 The Moslem slaughter of Christians in Nigeria is a precursor to the last days scenario that can be found in Bible prophecy.

For decades there have been reports of the mass slaughter of Christians around the world and almost no real media coverage has kept this horrific story, as they say in the media, "under wraps". Darfur has been the scene of hundreds of thousands of Christians being killed for no other reason than that they were Christians. The continent of Africa has been the hotbed of this dastardly crime on humanity. This latest report of the Moslem slaughter of hundreds of Christians in Nigeria again has had little media coverage and no real uproar from the world leaders about this terrible slaughter.

I made the statement earlier that this murderous act was a precursor to prophetic events in the future. In Revelation 6:9, the prophet John who prewrote history, told of believers in Jesus Christ during the seven year judgment period in the future, the Tribulation, at a time when believers will be martyred for their belief in Jesus Christ and for their testimony for Jesus. Millions of believers will be beheaded and slaughtered because of the forces of evil, Satanic forces wanting to rid the world of followers of Jesus Christ.

This Moslem slaughter of Nigerian Christians that took place recently is indeed a precursor to Bible prophecy being fulfilled.