The Apostle Paul wrote in Romans 13:8, "Owe no man any thing, but to love one another for he that loveth another hath fulfilled the law." It would seem that the local, state and federal governments in America sure love the people a lot because they have spent money on programs for people unlike ever before in history. This, however, is just not what the Lord had in mind. Christians are supposed to be fiscally responsible. For example, the 8th Commandment is "Thou shalt not steal" and the 10th Commandment is "Thou shalt not covet." But the Christians in this nation, who should be its salt and light, have allowed the government to covet and steal what is rightfully private and redistribute it to others.

Now the nation is in a real financial problem. So much so that school districts across the country are closing local public schools to save money. Kansas City is closing 29 of its 61 public schools to stave off bankruptcy. Detroit closed 29 of its 172 schools already. More cities are doing the same. Maybe closing the government schools is a good thing - at least secular humanist drivel will not be taught in those buildings anymore. But the real problem here is that even local governments are mirroring what the federal government is doing - spending somebody else's money like a drunken sailor. Meanwhile, the Department of Education in Washington, DC has placed an RFP for 27 short-barreled shotguns. Huh? 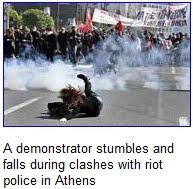 Headlines are that over 20,000 workers in Greece are rioting and its labor unions are striking. Why? Because the country is in bankruptcy and the nation's largest employer, the government, can't pay its workers. So there have been layoffs, budget cuts, pay cuts, cuts of everything trying to meet the European Union's demands that Greece bring its budget deficit from 12.7 percent of Gross Domestic Product to 8.7 percent this year. In two years, Greece must bring its deficit down to three percent of GDP. What happens if Greece doesn't meet these demands? The European Union will take over and Greece will no longer be a sovereign nation.

This could very well be a scene in the United States if Americans continue to allow Congress and the White House to continue the largest deficit spending spree in the history of the world - spending on so-called economic stimulus, socialization of health care, taking over of auto, banking and mortgage businesses. America's largest employer is the government and it pays nearly 20% more in salaries to its workers than does the private sector. In the White House 2010 budget submitted to Congress, the U.S. deficit as a percentage of GDP is estimated at 11%. That's very close to Greece's same trigger point. And you know who holds U.S. Debt - China and Japan. Don't wait until riots are the last resort.

The Health Care Reform Bill: Welcome To The Biggest Tax Increase In U.S. History - Before It's News