Since it took power in 2009, the Obama Administration has been stonewalling Israel over its requests for critical advanced weapons systems and munitions. These requests were approved in 2008 by the Bush Administration, but President Obama has forbidden their delivery to Israel. In fact, he recently diverted a shipment of bunker-buster bombs. They're sitting in a warehouse on Diego Garcia in the Indian Ocean. 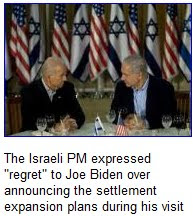 No one is admitting it, but the shipment was diverted right around the time that Israel outrageously insulted Vice President Joe Biden and, according to Secretary of State Hillary Clinton, President Obama and the entire United States. You remember, Israel insulted our national pride by announcing the approval of step four in a seven step process toward building a 1,600 unit apartment complex in a longtime Jewish neighborhood in East Jerusalem. That's the sort of insult that could make a great nation like ours collapse in a tearful heap of broken hearts!

But I smell a rat. As I reported last week, the whole incident seems 'manufactured.' It seems even more so today. Looking at the treatment Israeli Prime Minister Binyamin Netanyahu received at the hands of the President during his visit to Washington this week, it's obvious to me that the Administration is once again engaged in its trademark Chicago-style politics and arm-twisting. But who knows what they're after? One thing I know for sure, though, this Administration has absolutely no concern for our ally's best interests. In fact, I think President Obama is getting ready to throw Israel under the bus. And there's no way that can end well for the United States.