In a unanimous decision, the Superior New Jersey Appellate Court upheld the Constitutional right of the state's citizens to recall Democratic U.S. Senator Robert Menendez. The state of New Jersey is one of 18 states that have recall provisions in their state constitutions. Some nine states have language that allows for the recall of all statewide elected officials. New Jersey's Constitution is the most specific. The Court upheld the language in the state's constitution against the wishes of Senator Menendez, who had over 50 lawyers at the original hearing and argued that it was against the U.S. Constitution that the citizens of New Jersey had any right whatsoever to recall him during the midst of his elected term. 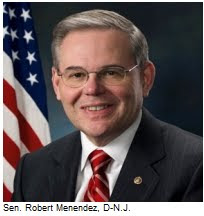 The New Jersey Court considered the Menendez argument that recall was against the U.S. Constitution before making its decision. It said:

"...we do not treat lightly defendants' request that we declare the words of our State Constitution to be irreconcilably in conflict with federal law, and absent clear precedent that compels such a declaration, we are loathe to strike down a component of our State's charter that fortifies the democratic role of our citizens. In short, our State Constitution, and the democratic process that produced it, deserves our utmost respect unless federal law clearly and definitively trumps it."

The Court debated the 17th Amendment that prescribes how Congressional vacancies can be filled by the state, saying that the amendment eliminated state legislations filling vacancies. The Court seemed to refer to the state's and the people's rights as guaranteed by the 10th Amendment in saying,

"It has been stated that "[a]s the Constitution does not bar the people of the states the power to recall their federal legislators, they should be free to exercise that power."

"We are pointed to no precedential opinion which has held that the recall of a United States Senator cannot be conducted. The silence of the federal Constitution may well result in the conclusion that it may be done."

Overall, the court decision in New Jersey allows the citizens of New Jersey to go forward with a petition drive to recall Menendez after a period of time expires for the senator to appeal the decision. But because it was a unanimous decision, it may be difficult for Menendez to win an appeal. Menendez has voted for the socialistic and unconstitutional health care bills and to put every American in debt to the government by more than $40,000 each. The people of New Jersey are doing America a favor by bringing recall forward as a Constitutional issue.

"Righteousness exalts a nation, but sin is a reproach to any people."

It is time for the sinful usurpers in Congress to be held accountable.

Toyotas Aren't the Only Thing Being Recalled This Year - Town Hall