NATO - Not Dead Yet

NATO appears to be in trouble. Europe lacks full commitment to the organization and its military is underfunded. Last week, the US Defense Secretary lamented over NATO's deterioration and fueled the fires of those who argue that NATO has long outlasted its usefulness. 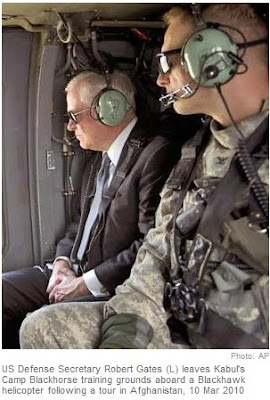 US Defense Secretary Robert Gates made it clear last week that NATO's weakness has been hurting the war effort in Afghanistan. "Right now, the alliance faces very serious, long-term, systemic problems," Gates said. Only five of its 28 member states are sticking by their agreements to spend two percent of their GDP on defense, and that lack of funding is hurting NATO's ability to buy the helicopters, cargo planes and spy drones necessary to fight effectively in Afghanistan.

One of NATO's purposes in Afghanistan has been to train the Afghan security forces to do their jobs so that the local government can fight on its own without outside help. NATO members, however, have only sent half of the 32,0000 trainers requested in order to teach the local security forces to do their jobs well. "Training and advising the security forces of other nations needs to become a key alliance mission," Gates said. "In Afghanistan, the alliance has struggled to field the trainers and mentors needed for this mission."

Support for the war has dwindled in Europe, especially in light of the corruption within Karzai's government. Yet, the war is not over, and it is imperative that the US maintain stability especially for the sake of Pakistan. If the Taliban overrun Pakistan with all of its nuclear weapons, the whole world will be in trouble. Europe, however, has not shown sufficient interest in maintaining a strong military force, and amidst complaints from US Cabinet officials that Europe does not do enough, some echo the sentiments of Andrew J Bacevich's "Let Europe Be Europe" in Foreign Policy magazine arguing that the US should just abandon NATO to the Europeans to handle all on their own.

While the need for NATO appeared to be over with the Cold War, other issues from the Balkans crisis to 21st century terrorism have arisen in the past twenty years to keep the alliance alive. The USSR may have been broken and Russia may be struggling, but its weakened military can still do damage. Europe and America still have common histories and cultures - convenient bonds that give both sides of the ocean plenty of reasons to remain committed to one another as allies.

The North Atlantic Treaty Organization was formed in 1949 as a defensive alliance in which each member was pledged to come to the aid of any of its members which were attacked militarily. However, at the 50th Anniversary Summit in Washington on April 23-24, 1999, NATO redefined itself in terms which appeared as a startling impetus toward the creation of a major new trans-global alliance. The new definition, as opposed to contributing toward regional and global stability, uncompromisingly identified the alliance as an offensive military threat to its neighbors. Since 1999, 12 new members have been added to NATO from eastern Europe and the Balkans, including Albania and Croatia just last year.

While some believe the time for NATO is over, the alliance isn't dead yet and even looks ready for another life boost. This fall another NATO summit will be held to present the updated vision of the alliance through a brand new Strategic Concept. Right now the Secretary General of NATO is drafting this new Strategic Concept in preparation for the 2010 summit at Lisbon, Portugal.

For centuries, Biblical scholars have been anticipating the re-emergence of the Roman Empire in its final phase. The bonding of Europe in recent decades would appear to be setting the stage for the final climax which the Bible portrays in such fascinating detail.

Gates: US Forces in Afghanistan May Speed Up Security Handover - Voice of America

House to vote on pullout from Afghanistan - Reuters