The Lessons of Adam Gadahn

The first American to be charged with treason since World War II was back in the news Sunday, both for a new videotape he released and for reports of his capture that turned out to be false. In the videotape, al-Qaeda operative Adam Gadahn, an American convert to Islam, praised the Fort Hood jihad murderer and called upon Muslims to carry out jihad attacks in the United States. The reports that Gadahn had been captured caused widespread excitement until the arrestee turned out to be a different American convert to Islam, Abu Yahya Mujahdeen Al-Adam, who like Gadahn is an al-Qaeda leader. The videotape and the arrest of the other American-born Muslim demonstrate yet again the cognitive dissonance that prevails at the highest levels regarding the nature of the jihad threat. 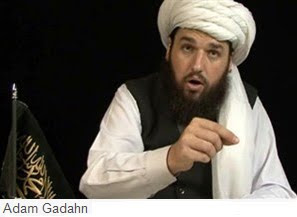 In the videotape, Gadahn called Nidal Hasan, who murdered thirteen people in the name of jihad and Islam at Fort Hood in November 2009, “Brother Nidal” and held him up as “the ideal role-model for every repentant Muslim in the armies of the unbelievers and apostate regimes.” And not just military personnel: Gadahn added that “Nidal Hasan is a pioneer, a trailblazer and a role-model who has opened a door, lit a path and shown the way forward for every Muslim who finds himself among the unbelievers.”

Gadahn advised his fellow jihad warriors: “You shouldn’t make the mistake of thinking that military bases are the only high-value targets in America and the West. On the contrary, there are countless other strategic places, institutions and installations which, by striking, the Muslim can do major damage.” He implored jihadis to think out of the box: “As the blessed operations of September 11th showed, a little imagination and planning and a limited budget can turn almost anything into a deadly, effective and convenient weapon.”

The California native also called upon Muslims to disrupt Western societies “by killing or capturing people in government, industry and the media.” These and other acts of jihadist violence would weaken “consumer confidence and stifle spending.” Gadahn grounded this appeal to mayhem in explicitly Islamic terms: “I am calling on every honest and vigilant Muslim in the countries of the Zionist-Crusader alliance in general and America, Britain and Israel in particular to prepare to play his due role in responding to and repelling the aggression of the enemies of Islam.”

Clearly this kind of appeal resonates among some Muslims – as evidenced by the fact that the captive confused with Gadahn was another American convert. And the Council on American-Islamic Relations (CAIR), the shadowy Hamas-linked group that bills itself (and fools many of the governing establishment and mainstream media in doing so) as a Muslim civil rights organization, seemed anxious to dispel the impression that Gadahn’s message would gain any traction among Muslims in the U.S., or at least among CAIR members. When it looked as if Gadahn had been captured, the organization issued a press release saying: “We welcome the reported arrest of Adam Gadahn and repeat the American Muslim community’s repudiation of all those who would promote or condone terrorism anywhere in the world.”

High-sounding words, but ultimately devoid of substance – and not solely because Gadahn is still at large. Belying its moderate protestations, CAIR (an unindicted co-conspirator in a case involving the funneling of charitable contributions to Hamas by what was once the largest Islamic charity in the U.S., the Holy Land Foundation) and its allied Muslim groups in America have never developed any kind of program for mosques and Islamic schools to teach against the version of Islam that Adam Gadahn and Abu Yahya Mujahdeen Al-Adam believe in and practice. Their vague condemnations contain nothing that would dissuade a young convert from believing that he has a divine responsibility to make war against unbelievers based on numerous Qur’anic commands (9:5, 9:29, 9:123, 47:4, etc.) and the Islamic legal superstructure mandating jihad warfare that is built upon them. Said the Muslim Prophet Muhammad: “Allah assigns for a person who participates in (holy battles) in Allah’s Cause and nothing causes him to do so except belief in Allah and in His Messengers, that he will be recompensed by Allah either with a reward, or booty (if he survives) or will be admitted to Paradise (if he is killed in the battle as a martyr).”

Although they profess to oppose what Gadahn is trying to do in Islam’s name, CAIR and the rest have done nothing to prevent the conversion and recruitment to jihad of more Adam Gadahns. For Gadahn himself discovered Islam by cruising the Internet. The appeals he saw there were much like the one he himself issued Sunday: an assumption of Islamic authenticity and the moral high ground, even when calling for bloodshed and murder.

A young man like Gadahn who gains what he knows about Islam from the internet will find dozens of jihadist websites, many of which feature detailed explications of the Qur’an and Sunnah making the case for jihad warfare — and precious few, if any, Muslim sites that go into any detail to refute this interpretation of Islam in favor of the essentially peaceful upon the existence of which so much American policy is based.

Adam Gadahn’s videotape and the capture of Abu Yahya Mujahdeen Al-Adam thus not only remind us that we must continue to be on guard against the jihad against the U.S. that the Obama Administration would prefer to pretend is not happening; they also underscore the ever-increasing need to call slick groups like CAIR to account, and to implement genuinely workable measures to stop jihadist recruitment in mosques in America.

Justice Department under Holder rife with traitors - The Washington Times

Geert Wilders to the House of Lords: 'The Left is facilitating Islamization' - World Tribune