US Vice President Joe Biden's trip to Israel last week began peaceably enough. It ended badly, however, after Biden said he "condemned" Israel's decision to continue building new housing units in East Jerusalem. After several days of coldness, Hillary Clinton today announced that relations between Israel and the United States were strong, saying, "We have a close, unshakable bond between the United States and Israel."

Over a year has passed since Barack Obama took office as President of the United States, and during the past fourteen months, the President has not yet made a trip to Israel. He has visited a wide variety of countries, including Ghana, Turkey, Saudi Arabia, Egypt, Djibouti, and has even shaken the hand of Venezuela's Hugo Chavez. Yet, while Obama visited Israel in 2008 before the elections, he has not stopped into Jerusalem since. 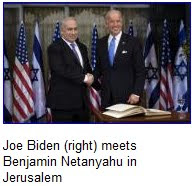 Last week, Vice President Joe Biden met with both Israeli President Shimon Peres and Prime Minister Benjamin Netanyahu, with the intent to extend a warm hand to the United States' greatest ally in the Middle East. In the beginning, all went well. During a joint press conference with Netanyahu on Tuesday, Biden praised Israel for restarting the peace process, and said, "There is no space between the United States and Israel when it comes to Israel's security." Netanyahu expressed thanks to the US for its leadership against Iran's nuclear weapons program. "I very much appreciate the efforts of President Obama and the American government to lead the international community to place tough sanctions on Iran," he said. Earlier that day, Biden had assured Peres that America was committed to Israel's security.

Shortly thereafter, though, Israel announced that it was going ahead with plans to build 1600 new homes in East Jerusalem, a decision that was a surprise to Biden and apparently to Netanyahu as well. The Interior Ministry, run by the ultraorthodox, nationalist party Shas, made the announcement right during the middle Biden's visit to the area. From Ramallah on Wednesday, Biden publicly criticized Israel's decision to continue the building.

"Messages have been sent to Biden and the Americans that there was no intention to undermine him," a senior Israeli official said. "We were genuinely surprised, just as surprised as the Americans."

Netanyahu, however, has made no visible steps toward reversing the decision. The Prime Minister has made clear on several occasions that the unity of Jerusalem is not negotiable. Last November, Netanyahu ordered a halt on building in the West Bank as part of an effort to resume peace talks, but has allowed new housing to be built in East Jerusalem despite the protests of the Palestinians.

The media have portrayed the incident as a major blunder on Israel's part and a risk to US-Israeli relations. On Friday, US Secretary of State Hillary Clinton criticized Israel for its bad timing and for endangering the upcoming peace negotiations with the Palestinians. She spent 43 minutes on the phone with Netanyahu expressing herself "bluntly" on the matter. "The announcement of the settlements on the very day that the vice president was there was insulting," Clinton said in an interview with CNN Friday. "It was just really a very unfortunate and difficult moment for everyone…"

After the weekend, however, things seemed to calm down. Clinton affirmed on Tuesday that the US is completely committed to Israel's security and assured all sides that the US remains a close ally of Israel.

The Obama Administration still wants Netanyahu to put a stop to building new housing units, but Netanyahu has not yet described how he is going to handle the situation. He did, however, respond to Clinton's softened tone with a statement saying that he, "appreciates and respects the warm words" from Clinton on "the deep bond between the US and Israel, and on the US commitment to Israel's security."

In the US, however, Jewish groups argue that Clinton's harsh words on Friday didn't help the situation. The American Jewish Committee said that the "sustained harsh criticism of Israel by senior Administration officials is unprecedented and could leave the impression of a cooling of our nation's relationship with Israel."

Rep. Eric Cantor (Va.), the House's only Jewish Republican, was also not pleased with the harsh criticism directed at Israel. "This attempt to curry favor with the Arabs by bullying Israel is not a wise move," Cantor said.