Most Americans want our investment of blood and treasure in Iraq not to have been in vain. Even though Iraq’s progress from dictatorship to democracy appears a success, the March 7 election makes it clear that it’s not the time to declare that democracy will be firmly implanted.

Before a brighter future can begin, Baghdad must form a new government. That process promises to be messy, like the political campaign just completed, but then, just maybe, our investment will pay-off in geopolitical dividends. 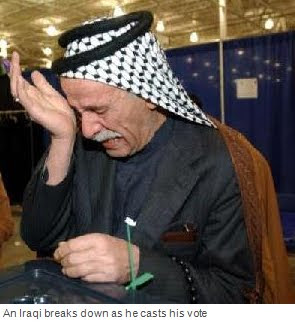 Last week’s balloting was the most competitive democratic contest for power ever held in the Middle East and Americans should be proud. More than half of the nearly 19 million eligible voters turned out to cast their ballots, choosing from more than 6,200 candidates organized in 86 political groups to gain seats in the 325-member assembly.

The last time that country had a national vote the Sunni Arab population boycotted the elections. There was no boycott this election, and across the landscape, interest in the elections was intense with a higher voter turnout than any recent U.S. national election.

Now we wait for the election outcome expected later this week, and preliminary results are not surprising. They indicate a close race among the mainly Shiite coalition of Prime Minister Nouri al-Maliki, a second Shiite group, the Iraqi National Alliance, and Iraqiya, a nationalist and secular ticket that received heavy support in Sunni areas.

The closeness of the vote will complicate the formation of a government which will require two or three of the leading blocs to join together. So far, it looks as though al-Maliki and Iraqiya nationalist leader Ayad Allawi, who briefly served as prime minister in 2004-2005, have the best chances of leading the new government.

A government headed by either al-Maliki or Allawi would be good news for America, because both are proven allies. Al-Maliki signed a strategic framework with the Bush administration in 2008 and has stiff-armed Tehran on multiple occasions. Allawi is a secularist that has close ties with Washington and Arab governments. He’s also a tough leader interested in creating a “clean government.”

Anticipating a strong showing at the ballot box, al-Maliki’s Shiite-based State of Law bloc has already opened talks with rival groups to form a coalition government. However, that process could take months of negotiations because all parties to the coalition will want the chance to put forward nominations for prime minister, recommend issues for the coalition’s platform and jockey for cabinet appointments.

The underlying danger is that disputes over the vote count or prolonged bargaining over the new government will open the way to renewed violence.

But a new government will eventually emerge. The litmus of that government’s success will be the long-term answers to the following questions.

First, can Iraqis govern themselves? So far, the Iraqis have demonstrated the ability to organize elections and develop a political culture, both major accomplishments. Otherwise their governing skills are poor. The parliament is routinely gridlocked and basic services such as electricity are poor at best. The new government has the opportunity to correct that poor record by tackling critical challenges: govern in a non-sectarian manner, resolve its longstanding budget crisis, equitably distribute the country’s oil wealth, resolve territorial disputes between Arabs and Kurds, and build ministries that are effective beyond Baghdad.

Second, are the Iraqis ready to assume the security of their country as American forces withdraw? The U.S. has spent years training and equipping the Iraqi security forces (ISF) for the day American troops withdraw. Last summer U.S. troops began the weaning process by leaving Iraqi cities for remote bases but remain on-call for emergencies.

Now violence is down and has remained low since last summer to the credit of the ISF. U.S. Army Gen. David Petraeus, the commander for American forces in the Middle East, said attacks in Iraq have dropped from an average of 220 per day in 2006 to less than 20 a day over the last six months.

The U.S. will continue the weaning process if the Iraqis stand-up a new government without sparking sectarian violence. “Around early May, if the country is on stable footing, I will begin moving troops out of Iraq,” Gen. Ray Odierno, the U.S. ground commander, said. The U.S. agreed to remove its combat troops by the end of August, followed by the removal of all forces from the country by December 31, 2011.

Third, will Iraq become a democratic model for its totalitarian neighbors? Iraq is a young democracy teetering on training wheels but it’s unique among the Arab world. “Many of the regional powers don’t like our experiment in democracy,” Hoshayr Zebari, Iraq’s foreign minister, said. He continued, “Some of our neighbors look upon this experiment with unease.”

Their uneasiness is understandable. The fact that free elections took place in Iraq with an uncertain outcome at this point shames other Arab states, like the Egyptian regime of Hosni Mubarak, who has been at the helm for three decades or the unelected rulers of Saudi Arabia. It’s noteworthy the Arab media reported on every detail of the Iraqi election process and the Arab street gave the process its rapt attention.

Fourth, will Iraq free itself of terrorists? In 2005, al-Qaeda terrorists shielded by Sunnis, undermined Iraqi democracy with relentless suicide bombings that killed thousands. Last week Iraqi extremists’ threats and scattered violence failed to stop most Iraqis from voting. Hopefully this demonstration of Iraqi devotion to their country’s future, which includes most Sunni voters, means the vast majority will no longer support terror networks inside their country.

Fifth, will Iraq help contain the Iranian threat? Iraq has no intention of being a satrap of the Persian state, but Iran has influence in Baghdad. They may share a long border, commerce, and a common faith, but Iraq does not intend to be Tehran’s patron especially after seeing the conditions imposed by the theocratic regime.

Iraqis are Arabs, not Persians. That ethnic difference trumps the Shia religious connection. They speak different languages and have been at odds for centuries. Invasions have historically been launched against Iran from Iraq such as Saddam Hussein’s war with Iran when Iraq’s Shiites provided most of the soldiers.

But Iran took advantage of the 2003 American invasion of Iraq to establish alliances with Iraqi Shiite political parties. Today, Iran’s main proxies are the Islamic Supreme Council of Iraq and the Iraqi National Alliance.

Recently, Iran used these proxies to influence Iraq’s election by seeking to ban more than 500 Sunni candidates. These proxies used trumped-up charges that Sunni candidates were sympathetic to the former Baathist regime of Saddam Hussein. This approach is eerily similar to the Islamic Republic’s use of its Committee of Experts to disqualify reformist candidates from running in Iranian national elections.

Finally, will Iraq be a stabilizing force in the region? Iraq has long acted as a buffer between the Shiite and Sunni worlds. For most of the Islamic Republic’s existence before the 1991 Gulf War, it was locked in conflict with Iran which kept the Persians from expanding their influence into Arab lands.

The Arab nations hope Iraq will resume that role now that the U.S. is leaving. For most Arab states, Persian regional power sparks fear because they see plenty of Iranian hegemonic activity with Syria, Lebanon, Gaza, and Yemen.

The American project in Iraq created a rare phenomenon - a Middle Eastern government out of the consent of the governed. But only time will tell whether America’s investment of blood and treasure ensures freedom for Iraq, brings long-term stability to the region, facilitates victory over other regional terrorist organizations and prevents Iranian hegemony.

How Iraqi Oil Is Changing the World - Foreign Policy