“In God We Trust” and “Under God” = “No Theological Impact?”

The famous words "In God We Trust" and "under God" are safe . . . for now. The United States Court of Appeals for the Ninth Circuit ruled yesterday that those phrases from the national currency and the Pledge of Allegiance do not represent a governmental establishment of religion.

The court, one of the most liberal among the Federal courts, ruled against Michael Newdow, a Sacramento atheist known for previous suits against the phrase "under God" in the pledge. 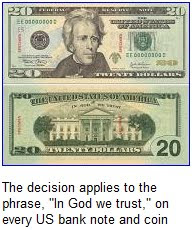 Here is how the Los Angeles Times summarized the decision:

Joined by other Sacramento-area parents opposed to the pledge, Newdow, a physician with a law degree, brought an identical challenge against the Rio Linda Union School District practice of leading daily pledges and secured a ruling in his favor from U.S. District Judge Lawrence K. Karlton. The judge cited the 9th Circuit's holding that Congress rendered the pledge unconstitutional when it added the words "under God" in 1954, in a Cold War-era gesture against the godless communism of the Soviet Union.

Thursday's ruling brings the 9th Circuit in line with other federal appeals courts in upholding a school's right to conduct the patriotic ritual. That unity among the circuit courts makes it unlikely that the Supreme Court will again review the decision, both Newdow and those in favor of preserving the "under God" reference said.

This decision is good news, and comes as something of a relief - especially considering the fact that the Ninth Circuit is involved. There is no substance to the claim that these two phrases violate the Constitution. Furthermore, they represent only the tip of the iceberg when it comes to such questions. This kind of language pervades official discourse - extending even to the phrase "the year of our Lord" in the dating of many government documents.

But, what does it mean? Christians should pay close attention to the logic employed by the court in these two decisions. Consider this section of the court's opinion in which it cites its own precedent in the case Aronow v. United States:

It is not easy to discern any religious significance attendant the payment of a bill with coin or currency on which has been imprinted ‘In God We Trust’ or the study of a government publication or document bearing that slogan. . . . While ‘ceremonial’ and ‘patriotic’ may not be particularly apt words to describe the category of the national motto, it is excluded from First Amendment significance because the motto has no theological or ritualistic impact. As stated by the Congressional report, it has ‘spiritual and psychological value’ and ‘inspirational quality.’

In other words, the phrase "In God We Trust" as our national motto is theologically and religiously meaningless, having "no theological or ritualistic impact," but only a "spiritual and psychological value."

In the decision on the Pledge of Allegiance the court used similar logic and language:

We hold that the Pledge of Allegiance does not violate the Establishment Clause because Congress’ ostensible and pre-dominant purpose was to inspire patriotism and that the context of the Pledge — its wording as a whole, the preamble to the statute, and this nation’s history — demonstrate that it is a predominantly patriotic exercise. For these reasons, the phrase “one Nation under God” does not turn this patriotic exercise into a religious activity.

The court is arguing that the phrases in question are not really theological statements at all, presumably because if the court found theological significance in the phrases it would have been led to rule otherwise.

This legal logic is recognizable, but so is the theological dimension of all this. The court has ruled, in effect, that the language of these contested phrases represents what is rightly called "civil religion." In essence, civil religion is the mass religion that serves the purposes of the state and the culture as a unifying force - a rather bland and diffused religiosity - an innocuous theology with little specificity.

Christians must never confuse civil religion with the real thing. When our fellow citizens recite the pledge, it is not to be taken as a statement of personal faith in God. In that sense, Christians are rightly concerned that we make clear what authentic faith in God requires and means. Confusing civil religion with Christianity is deadly dangerous.

On the other hand, Christians are well aware of the constant danger of idolatry, and no entity rivals a powerful government in terms of the idolatrous temptation. In that sense, it is healthy and good that we employ language that relativizes the power and authority of the state. It is both important and healthy that our motto places trust in God, and not in the state. And the knowledge that the nation exists "under God" is no small matter.

So, we should welcome the decision of the Ninth Circuit panel but not read too much into the decision or the language at stake. Another legal challenge is always right around the corner. The task of defining true faith in God falls to us right now.

The Impact of Christianity - Faith Facts