Earthquakes! Are They Increasing?

Recent events in Haiti and Chili have caused many Christians to ask, “Are earthquakes increasing in the way that Jesus said they would in the period leading up to the Tribulation? His words are among the most forthright and unequivocal ever spoken. There can be no mistake about what He said:

“For nation shall rise against nation, and kingdom against kingdom: and there shall be famines, and pestilences, and earthquakes, in divers places. “All these are the beginning of sorrows” (Matt. 24:7,8).

In January and February of this year, those who search the Scriptures and watch for His return marked those words well, wondering with renewed interest whether His coming was being foreshadowed by the prophesied global events. 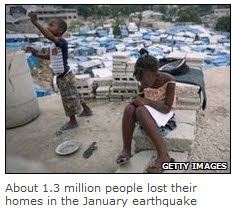 On Tuesday, the 12th of January, a catastrophic earthquake struck Haiti. Its magnitude was officially listed at 7.0 on the Moment Magnitude Scale [MMS]. Its epicenter was 16 miles west of Haiti’s capital, Port-au-Prince. By January 24, scientists had recorded some 53 aftershocks of magnitude 4.5 or greater. By mid-February, an staggering three million people had been affected by the quake. Most of them were homeless, living in tent cities without sanitation, running water, electricity or the necessary food and supplies.

Almost a quarter of a million dead had been identified, and that toll is still rising. Three hundred thousand were injured and over a quarter of a million buildings had been listed as irreversibly damaged. Rescue efforts were sporadic in the area, since communications, hospitals, electrical power grids and air, sea and land transportation were almost at a standstill.

One month and 16 days later, on the 27th of February, another powerful earthquake struck off the coast of Chili. This one was measured at 8.8 MMS. It was much more powerful than the Haiti temblor. Like the earlier Richter Scale, the MMS is a logarithmic or exponential scale, and they correlate closely in the lower ranges. A scale number of 8 would be ten times more powerful than a scale number of 7. The Chili temblor reached almost 9, which would make it almost a hundred times more powerful than the one in Haiti. The new MMS scale, represented by the symbol Mw, is said to be much more accurate than the older measurements. In addition, it has no upper limit of measurement. Its accuracy is said to be much greater in the range seen in larger earthquakes.

If one didn’t know better, it would seem that science is preparing to measure “the big one,” which is said to be long overdue. The first week of March witnessed the phenomenon of our Earth still ringing like a gong. During the week of March 1st through 7th, there were 85 earthquakes in the world, measuring between magnitudes 5.0 and 6.6. Forty-two of them were located in Chili! But then, aftershocks in the wake of a major earthquake are common.

It was truly a globe-shaking event. Seismologists who measured it, say that it may have shortened the length of Earth’s day by 1.26 microseconds. They also calculated a change in the Earth’s axis of rotation, which they say moved by 8 centimeters (3.25 inches)! Christians who heard this were doubtless reminded of the words of Isaiah the prophet, when he wrote about the massive earthquakes in the coming Tribulation:

“The earth is utterly broken down, the earth is clean dissolved, the earth is moved exceedingly. “The earth shall reel to and fro like a drunkard, and shall be removed like a cottage; and the transgression thereof shall be heavy upon it; and it shall fall, and not rise again. “And it shall come to pass in that day, that the LORD shall punish the host of the high ones that are on high, and the kings of the earth upon the earth” (Is. 24:19-21).

How could Isaiah have known enough to connect earthquakes with the tilt of the Earth’s axis? Writing in the 7th century B.C., the only way he could have known this “scientific” fact is for the Lord to have shown him a vision of the phenomenon. In the Tribulation, Earth’s axis will probably be displaced by miles (perhaps hundreds of miles), rather than inches. Inconceivably huge earthquakes and tsunamis will wrack the world in the Day of the Lord. And apparently, the tilt of the Earth’s axis will be permanently changed!

Is Prophecy Being Fulfilled?

In the period immediately following the Chile quake, a 7.0 MMS earthquake struck Japan, followed by a 6.4 MMS in Taiwan and a 6.5 MMS in Sumatra. Geophysicists say that earthquakes tend to arrive in clusters. The end of the last cluster, they say was in 1964, when the so-called Great Alaska Earthquake hit on March 27th of that year. Because it came on the Friday before Easter, it came to be called “The Good Friday Earthquake.” It was measured at a Richter 9.1, and was at the time, the largest North American earthquake ever recorded.

Since then, earthquakes have occurred at a more or less constant rate, with a few large ones coming from time to time. For example, in the decade from 2000 through 2009, we find the following annual U.S.G.S. tally of earthquakes above magnitude 6.0 MMS. This is their current report:

From the above, it may be seen that this century began with a slight upward trend in numbers of earthquakes, though the year 2009 does show a slight decrease. Still, it is impossible to say that we see a significant increase to the degree that would qualify as “global cataclysm.”

Nevertheless, we have a baseline from which to watch. It will be fascinating to compare the seismic events upcoming in the year 2010 with the numbers above. If we should see more than 200 earthquakes above magnitude 6.0 MMS, we may conclude that there is real prophetic significance in the occurrences.

In the June, 1996, Prophecy in the News magazine, we took a look back into the earthquake statistics of the past. Seismologists rightly note that today we have a phenomenal increase in our ability to make accurate observations of geophysical events. In the 1920s, for example, there were only about 350 seismic observational facilities. They were the traditional, mechanical pendulum-and-ink-pen drum recorders. Today, we have over 8,000 stations, performing a constant surveillance of our globe. These newer stations use sensitive computer-driven recorders that can accurately measure seismicity, from mini-quakes to globe-shattering events.

Still, as we observed in 1996, earthquakes with magnitudes of Richter 6.0 and above were seen to be steadily increasing, decade by decade, from the 1950s through the 1990s. These numbers were reported at the time by The Philadelphia Inquirer:

From this listing, it was easy to see an increase in earthquakes. Yet seismologists say that the upward trend is attributable to more sensitive instrumentation. They call it “observational bias.”

On the other hand, we’re not talking about tiny, hard-to-detect quakes; we’re simply listing the “big ones,” magnitude 6.0 and above. It’s hard to believe that better instrumentation alone in the last sixty years would yield numbers so consistently elevated, year after year.

But hold on. As now reported by the U.S.G.S., Historical Earthquakes of 6.0 and above are given for each decade as follows:

The difference in these two tables illustrates the difficulty in making comparisons over time. To complicate matters even more, by some methods of reckoning, the U.S.G.S. reports as many as 1,492 earthquakes worldwide, in the decade of the 1990s!

Though the new observations include more data, they still show a continuing increase in seismic activity.

The scientific community is inclined toward the “uniformitarian” model, which states that earth-changes take place over long periods, ranging into the millions and millions of years. They are therefore, bound to see continental drift as infinitesimally slow. They generate geophysical statistics to favor the evolutionary view. This secular viewpoint is based upon the philosophy that man, not God, is the measure of all things. To them, history creeps along at a snail’s pace; scientists with that perspective tend to “crunch the numbers” in ways that reflect their own expectations.

Christians have a different view. We see history as moving at a uniform pace, punctuated at intervals by significant events that shake the world to its very core. Noah’s Flood, the Tower of Babel, the Call of Abraham, the giving of the Law through Moses, the First Coming of Christ, are all significant events that have shaken the world. The rapture and Tribulation are on schedule to shake it again. In fact, the Tribulation will literally shake the world in ways never experienced in the past:

“For then shall be great tribulation, such as was not since the beginning of the world to this time, no, nor ever shall be” (Matt. 24:21).

We watch the world with a sense of expectancy, believing that what the Bible promises is both real and detectable. Our Lord told us to watch for signs that prophesied events are near. Jesus not only warned of the “great tribulation,” He urged His followers to carefully observe the signs that would tell them the Day of the Lord is near:

“And take heed to yourselves, lest at any time your hearts be overcharged with surfeiting, and drunkenness, and cares of this life, and so that day come upon you unawares. “For as a snare shall it come on all them that dwell on the face of the whole earth. “Watch ye therefore, and pray always, that ye may be accounted worthy to escape all these things that shall come to pass, and to stand before the Son of man” (Lk. 21:34-36).

We might argue about how to interpret earthquake observations. Still, it is hard to escape the plain facts of the case. The tally of significant seismic activity is increasing. Even geophysicists are saying that we are long overdue for an earth-shattering megaquake. They say that it might happen in California, South America or Alaska.

But we shouldn’t forget that the world’s longest fault zone extends from Mt. Hermon, southward past the Sea of Galilee, the Dead Sea, across the Red Sea and down Eastern Africa to Kenya. It is called the “Jordan Rift Valley,” which earthquake experts say could one day unleash the largest quake in recorded history.

The prophet Zechariah tells us that Jesus will touch down upon the Mount of Olives. His arrival will change the very landscape of Israel, creating riverbeds that do not now exist:

“And ye shall flee to the valley of the mountains; for the valley of the mountains shall reach unto Azal: yea, ye shall flee, like as ye fled from before the earthquake in the days of Uzziah king of Judah: and the LORD my God shall come, and all the saints with thee. “And it shall come to pass in that day, that the light shall not be clear, nor dark: “But it shall be one day which shall be known to the LORD, not day, nor night: but it shall come to pass, that at evening time it shall be light. “And it shall be in that day, that living waters shall go out from Jerusalem; half of them toward the former sea, and half of them toward the hinder sea: in summer and in winter shall it be” (Zech. 14:5-8).

The “big one” is coming. And it’s going to be bigger than anyone can imagine. He created this world, and He will reshape it, according to His own design for a global Kingdom. Keep watching … we will!

Recent Earthquakes Cause Spike in Related Searches Online - News On 6