The only action that can stop Iran from building nuclear weapons is an Israeli strike on Tehran's nuclear facilities, argued John Bolton, the former U.S. ambassador to the U.N. under the Bush administration.

Speaking in a radio interview with WND senior reporter Aaron Klein, who hosts an investigative program on New York's WABC 770 AM, Bolton warned time is running out for an Israeli attack.

"Right now we know about the facilities. ... We know where they are," he said. "We know exactly what their dimensions are, and I think they are susceptible to an Israeli attack." 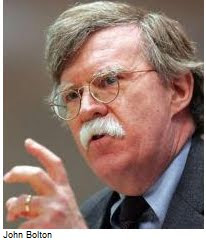 Bolton said an Israeli military option "isn't there forever. ... If Israel is going to use military force, it needs to use it sooner rather than later."

Bolton posited, "Right now, basically the only scenario that I see other than Iran getting nuclear weapons is military strikes against their nuclear program that result in breaking Iran's control over the nuclear fuel cycle."

Bolton said he believes there is no doubt Israel possesses the military capability to hit Iran's nuclear sites, but he said the Jewish state would need to act soon.

"I think the problem is that the military option is declining day by day," he said. "Every day that goes by is another day where the Iranians can build alternative facilities for uranium conversion, uranium enrichment weaponization, that are in unknown locations that are deeply buried or hardened and that Israel's capabilities just can't reach."

Bolton said he sees "almost no chance" for the U.N. to pass the crippling sanctions that Israeli Prime Minister Benjamin Netanyahu has demanded.

"I think it's just a mistake to believe the Security Council – which has already passed three sanctions resolutions against Iran – will do anything much more than a marginal increase in sanctions that are already in place," he stated.

"At this point there is very little that will stop Iran," Bolton added. "The most likely outcome, unfortunately, is that Iran is going to get nuclear weapons, and I think sooner rather than later."

Ashkenazi in US to discuss Iran sanctions - Ynetnews

Biden: U.S. Will Back Israel Against Iran - NewsMax.com