Last week two American Muslim women were arrested for their involvement in a plot to murder the Swedish cartoonist Lars Vilks. One has since been released, but the cases of both women raise questions for Muslim groups in America and law enforcement officials – questions that are not being adequately answered. 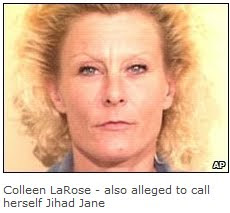 Both “Jihad Jane” - Colleen (or Fatima LaRose) - who has been charged with recruiting suspects for “violent jihad” and conspiring to kill Vilks, and “Jihad Jamie,” Jamie Paulin-Ramirez, who has since been released, are American women who became, out of despair, desperation, or the search for some great cause, converts to Islam.

And these bored suburbanites didn’t have to go to the Internet to get “radicalized.” As long ago as January 1999, the Naqshbandi Sufi leader Sheikh Muhammad Hisham Kabbani declared in a State Department Open Forum that Islamic supremacists controlled most mosques in America:

“The most dangerous thing that is going on now in these mosques,” he said, “that has been sent upon these mosques around the United States – like churches they were established by different organizations and that is ok – but the problem with our communities is the extremist ideology. Because they are very active they took over the mosques; and we can say that they took over more than 80% of the mosques that have been established in the US. And there are more than 3000 mosques in the US. So it means that the methodology or ideology of extremist has been spread to 80% of the Muslim population, but not all of them agree with it.”

Terrorism expert Yehudit Barsky affirmed the same thing in 2005, saying that 80% of the mosques in this country “have been radicalized by Saudi money and influence.” The Center for Religious Freedom found in 2005 a massive distribution of hateful jihadist and Islamic supremacist material in mosques in this country. And in June 2008 federal investigators found that the Islamic Saudi Academy in Virginia, despite promises to stop teaching such material, was still using books that advocated that apostates from Islam be executed and that it was permissible for Muslims to kill and seize the property of “polytheists.”

This is the kind of teaching that Jihad Jane and Jihad Jamie imbibed. Jihad Jamie, despite her apparent non-involvement in the plot to murder Vilks, appears to be passing on this hatred to her six-year-old son, Christian (now Walid). Her mother, Christine Holcomb-Mott, recounted that the boy “said that Christians will burn in hellfire. That’s what they are teaching this baby.” Paulin-Ramirez’s stepfather, George Mott, also a convert to Islam, said of young Walid: “He’s in an Islamic school. They’re teaching him hate.”

According to Mott, the boy told him: “We are building pipes [pipe bombs], like the Fourth of July!” And he asked Paulin-Ramirez: “What are you going to do, strap a bomb on and blow up something?”

Her answer was direct: “If necessary, yes.”

Direct, yes, and chilling, because nothing is being done about it. Law enforcement and government authorities assume, without any evidence to support their assumption, that the overwhelming majority of Muslims in the U.S. reject and abhor such perspectives. Yet despite their protestations of moderation, American Muslim advocacy groups such as the Council on American-Islamic Relations (CAIR) have done absolutely nothing to develop any response to the Islamic “radicalism” that converts to Islam encounter on the Internet – or in American mosques.

The one thing that can and should be done would be to call American Muslim groups to account, and demand that they institute in mosques and Islamic schools comprehensive, honest, verifiable programs teaching against the jihad doctrine and Islamic supremacism.

But officials will never do this. They would prefer to pretend that the jihad doctrine and Islamic supremacism do not exist. And so we will see many more desperate American housewives becoming Jihad Janes and Jihad Jamies.

Saudis have radicalized 80% of US mosques - The Candid Eye