In the 18th century, the thirteen British colonies along the coast of North America rebelled against the King of England in the long, bloody war that gave birth to the United States of America.

Relations between the Crown and its former colonies remained strained throughout the 19th century.

The War of 1812 ended in a decisive draw that formalized the border between the US and Canada. During the Civil War, the Crown backed the Confederacy over the Union.

But the 20th century marked a new era in US-British relations. The two nations were almost as one for the better part of the century.

In a 1946 speech entitled "The Sinews of Peace" delivered at Westminster College, Prime Minister Winston Churchill declared the existence of a 'special relationship' between the British and American people.

"Neither the sure prevention of war, nor the continuous rise of world organization will be gained without what I have called the fraternal association of the English-speaking peoples. This means a special relationship between the British Commonwealth and Empire and the United States. . .

. . . The United States has already a Permanent Defense Agreement with the Dominion of Canada, which is so devotedly attached to the British Commonwealth and Empire. This Agreement is more effective than many of those which have often been made under formal alliances. This principle should be extended to all British Commonwealths with full reciprocity. . .

. . . There is however an important question we must ask ourselves. Would a special relationship between the United States and the British Commonwealth be inconsistent with our over-riding loyalties to the World Organization? I reply that, on the contrary, it is probably the only means by which that organization will achieve its full stature and strength."

It was during that same speech that Churchill coined the phrase "Iron Curtain" to describe those nations of the Soviet bloc.

The "Iron Curtain" that Churchill so eloquently described has fallen. The British Empire is no more. Burma, Britain's last colonial holding, declared independence in 1948.

And now, as of this week, according to the British House of Commons Foreign Affairs Select Committee, the 'special relationship' between the British and the United States no longer exists.

"British and European politicians have been guilty of over-optimism about the extent of influence they have over the US," said committee chairman Mike Gapes.

"We must be realistic and accept that globalization, structural changes and shifts in geopolitical power will inevitably affect the UK-US relationship".

In the report itself, the committee of members of parliament said there were "many lessons to be learned" from Britain's approach to the United States over the 2003 Iraq war.

Then-Premier Tony Blair stood shoulder-to-shoulder with President George W. Bush over the invasion despite a lack of wider international support.

"The perception that the British government was a subservient 'poodle' to the US administration leading up to the period of the invasion of Iraq and its aftermath is widespread both among the British public and overseas," it said.

"This perception, whatever its relation to reality, is deeply damaging to the reputation and interests of the UK."

Britain's Labor Party is center-left Socialist so it is unsurprising that the committee would blame George Bush for the rift between the two countries.

But according to Prime Minister Gordon Blair, that 'special relationship' survived the Bush administration. 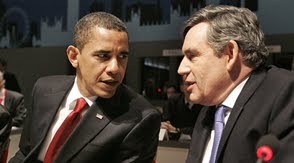 It was Gordon Brown that Obama snubbed last September, following Obama's earlier expression of respect for the British allies by gifting the Prime Minister with a Wal-Mart DVD gift box during their first meeting in March of ‘08.

That event was also widely characterized as a 'snub' by Obama in the British media.

Nonetheless, insisted Brown as recently as last September, "I do say that the special relationship is strong, it continues to strengthen."

"No. 10 denied there had been any hint of a snub, saying Obama and Brown had plenty of chances to talk as they sat next to one another at the summits. . .

But as the Guardian noted dryly;

It is difficult to imagine there NOT being a 'special relationship' between Great Britain and the United States - and in particular between the Brown administration and the Obama administration. They are political kindred spirits.

One might blame George Bush and the Iraq War for sowing the seeds of discord among the British ruling Left.

But it was Obama that reaped the harvest.

"And in that day will I make Jerusalem a burdensome stone for all people: all that burden themselves with it shall be cut in pieces, though all the people of the earth be gathered together against it.” (Zechariah 12:3)

In 1492, the Spanish ordered the forced conversion or expulsion of all Jews from Spain, at the time, the world's most powerful empire.

Most of them went to England, which was at the time very welcoming of Jews. One hundred years later, the British destroyed the Spanish Armada and for the next three hundred years, the sun never set on the British Empire.

In 1917 when the British government looked favorably upon the establishment of a Jewish State in Palestine, the British Empire was at the peak of its power and influence.

In March, 1921, Foreign Secretary Winston Churchill severed what was to become Transjordan from the land promised by the Balfour Declaration.

"Whereas the Principal Allied Powers have also agreed that the Mandatory should be responsible for putting into effect the declaration originally made on November 2nd, 1917, by the Government of His Britannic Majesty, and adopted by the said Powers, in favor of the establishment in Palestine of a national home for the Jewish people, it being clearly understood that nothing should be done which might prejudice the civil and religious rights of existing non-Jewish communities in Palestine, or the rights and political status enjoyed by Jews in any other country."

In other words, the Crown was for a Jewish homeland before it was against it.

The British restricted Jewish emigration into the promised "Jewish" homeland, before and even during and after the Holocaust, sending uncounted thousands of Jews to their eventual deaths at the hands of Hitler's henchmen.

By the time the British Mandate ended in 1948, the mighty British Empire had literally been cut into pieces, replaced by the nominal British Commonwealth of independent nations.

In 1993, the United States burdened itself with Jerusalem when it forced Israel into the land for peace formula formalized in the Oslo Accords.

At the time, the United States was at the zenith of its power, wealth and international prestige.

The US had just led the largest international alliance since World War II in a successful war against Iraq to secure the liberation of Kuwait, winning the Cold War in the process.

By 2000, Israel had lost everything it had gained in the five preceding wars and was prepared to trade away Jerusalem when Yasser Arafat invoked a new uprising. The following year, the United States was attacked by the forces of radical Islam and has been steadily cut into pieces since.

All America's traditional alliances are crumbling before our eyes.

We are dependent upon hostile countries for our financial health, our energy needs and, as in the case of international support for sanctions on Iran, for our security needs.

What few genuine friends America had in the world, like Britain and (especially) Israel have openly rejected any special relationship status with the United States, overturning virtually all of the political alliances of the 20th century and leaving America to face the 21st century alone.

According to the Bible, the fate of the nations in the last days will be directly related to the manner in which they treat Israel. God promised Abraham,

"And I will bless them that bless thee, and curse him that curseth thee: and in thee shall all families of the earth be blessed." (Genesis 12:3)

The Bible is filled with promises of Divine retribution against those who would stand against His people.

"Therefore saith the LORD, the LORD of hosts, the mighty One of Israel, Ah, I will ease Me of Mine adversaries, and avenge Me of Mine enemies:" (Isaiah 1:24)

"And shall not God avenge His own elect, which cry day and night unto Him, though He bear long with them?" (Luke 18:7)

"And before Him shall be gathered all nations: and He shall separate them one from another, as a shepherd divideth His sheep from the goats: And He shall set the sheep on His right hand, but the goats on the left . . " (Matthew 25:32-33)

It isn't that God didn't anticipate the existence of the United States - He did. He provided a detailed description of America's post-Christian social and political model during the last days through the Apostle Paul's 2nd Letter to Timothy 3:1-5.

What I want to highlight in this briefing is the incredible accuracy of Bible prophecy, down to the tiniest detail.

World events continue to follow the outline of Bible prophecy as if it were the script to an unfolding movie - each new element falling into place at exactly the right time to advance the plotline until you can tell what should happen next.

According to that script, the next major event on the prophetic timeline should be the Rapture of the Church.

"Wherefore comfort one another with these words." (2nd Thessalonians 4:18)

Why Britain's Affair with the U.S. Is Over - TIME