Bigotry Is as Bigotry Does

In a delicious twist of irony well-suited to her own ironic sense of humor, Ann Coulter scored what may be the biggest success in her career as an apologist for conservative ideals. And she did it by not speaking.

Coulter was scheduled to speak at the University of Ottawa. Two days beforehand, she was warned by university officials in an email to “use “restraint, respect and consideration” in her address.

One wonders if this is standard practice at a university that hosted the ultra-racist “Israel Apartheid Week” or if it was reserved exclusively for American conservatives?

Francois Houle’s email was released to the media by an enraged Coulter:

"Our domestic laws, both provincial and federal, delineate freedom of expression (or "free speech") in a manner that is somewhat different than the approach taken in the United States. I therefore encourage you to educate yourself, if need be, as to what is acceptable in Canada and to do so before your planned visit here."

And just to make sure she got the message, he added;

"Promoting hatred against any identifiable group would not only be considered inappropriate, but could in fact lead to criminal charges."

And in complete keeping with the Canadian self-image as the model of politeness and propriety and in expression of the liberal Canadian image of American conservatism;

"I therefore ask you, while you are a guest on our campus, to weigh your words with respect and civility in mind."

Coulter’s proclivity for the ironic served her well. She rejected a request for a telephone interview from the Ottawa Citizen by email, explaining:

“Now that the provost has instructed me on the criminal speech laws he apparently believes I have a proclivity (to break), despite knowing nothing about my speech, I see that he is guilty of promoting hatred against an identifiable group: conservatives," before adding, "I was expecting flowers upon my arrival in Canada, not a threat of criminal prosecution."

Meanwhile, on the university campus, the president of the student federation barred a volunteer organizer from putting up posters advertising the upcoming appearance.

"The federation does not support Ann Coulter speaking on our campus," said student president Seamus Wolfe. "We're trying to work with the administration to see if we can ask her to do her speaking event somewhere else."

Another student activist was quoted calling Coulter “venomous” saying she “crosses the line and promotes hatred and violence.” 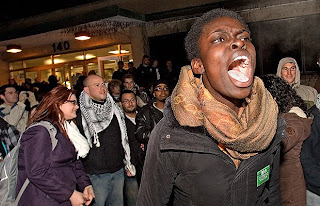 A reporter from the Ottawa Citizen attended the event. He reported an encounter with one of the protesters.

"I raised my tape recorder to one of the young protesters and asked why she wanted to stop her fellow University of Ottawa students and hundreds of others from hearing Ann Coulter speak.

She glowed with righteous intensity, delivering her words with a clarity and force that would delight the coach of a debate team. “Students are here to say that we don’t want hate speech on our campus.”

OK, I said. So what’s the difference between free speech and hate speech? Where do you draw the line?

She hesitated. But then the righteousness flared back up and the words rushed out.

“Most students I’ve talked to have said we don’t want her on campus and students are here tonight to say that we want a campus free of hate speech. ”

Coulter was even denounced from the floor of the national parliament. Government officials were forbidden to attend.

All for a speech she hadn’t given yet.

A speech that, in the end, she never gave. More than 1,000 thugs stormed the 400-seat convention hall where Coulter was scheduled to speak, overwhelming security and forcing cancellation of the event.

Even more fascinating than the incredible prejudice of the university liberals against ideas they had not yet heard, but pronounced intolerant and therefore not to be tolerated by the tolerant, are some of the comments delivered in Coulter’s “defense” in the Canadian press.

The Toronto Star hunted down the most ghastly photo they could find of Coulter under the headline: “Coulter’s Right To Free Speech Defended” above the subtitle; “Right-wing firebrand should be allowed to be heard, even if what she says is hateful, civil libertarians say”.

The Star’s Joanna Smith then opened her defense of Ann Coulter’s right to free speech thusly:

“They believe her words can be racist, hateful and ignorant, but she should be free to say them – just as others should be allowed to tell her to shut up.”

University of Toronto law professor Brenda Cossman said some of what Coulter says actually might be construed as hate speech under the law, but that has more to do with what she sees as a larger problem with freedom of expression here.

"I think her views are completely beyond the pale, offensive, obnoxious, uninformed, provocative, all of those things – except she should be allowed to say them and she shouldn't face criminal prosecution," Cossman said.

Noted the Calgary Sun’s defense under the headline, “U of C Right to Let Coulter Rant”

“This is a woman who oozes slime-coated soundbites aimed to offend, but really, she’s no more outrageous than your average bigot.”

In truth, Ann Coulter did Canadians a service by offering herself up as a sacrifice to the altar of mindless liberal political correctness. That service was obliquely acknowledged by one letter writer published in the Ottawa Citizen.

Complaining that the university “played right into Coulter’s hands” he writes:

“The university's reaction to Coulter was clearly not about concern with hate speech but only about censoring a point of view that the university does not wish to hear. In the end, they magnified Coulter's point of view while making us Ottawans look like intolerant radicals.”

What really happened was they justified Coulter’s point of view and exposed the liberals in Ottawa – and across Canada - for the intolerant radicals they consistently have proved themselves to be.

And some of them can almost see it.

Coulter to try again - The Province