US Vice President Joseph Biden's job is about to stop being easy. Indeed, it is about to become impossible.

On Monday Biden will arrive in Israel for a three-day visit. Biden, who will meet with Israel's leaders, will be the most senior official in the cavalcade of senior US officials that have descended on Israel in recent weeks. Biden will replace Senator John Kerry, the Chairman of the Senate Foreign Relations Committee who was here this week. Kerry himself replaced Adm. Michael Mullen, the Chairman of the Joint Chiefs of Staff who was here two weeks ago.

In his press conference in Jerusalem on Monday, Kerry explained the purpose of these visits. As he put it,

"...I am here and other people were here and Vice President Biden is coming shortly... to make sure we are all on the same page and that we are all clear about [Iran]."

Although Biden is just the latest senior US official to visit Israel to try to coerce the government not to prevent Iran from becoming a nuclear power, his visit is novel in one respect. In addition to his meetings with Prime Minister Binyamin Netanyahu and the rest of Israel's senior officials, Biden intends to make a case for the Obama administration's policies towards Iran, the Palestinians and Israel directly to the Israeli public. During his trip he will give what is being billed as a major policy speech at Tel Aviv University. 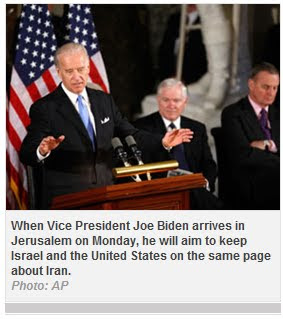 In light of the gaping disparity between the Obama administration's policies and those of the Israeli government, the apparent goal of Biden's address is to shore up the position of the Israeli Left as an alternative to Netanyahu. Apparently, the picture emerging from all of the senior US officials' meetings with Netanyahu is that Israel's leader still feels comfortable defying them. Presumably, they now believe that the only way to force him to toe their line is by making him believe that the price of defiance will be his premiership.

This of course is a difficult task. The Left after all was roundly defeated in last year's elections. Making it a credible alternative is no mean task.

The Israeli Left for its part is doing its best to tie its own fortunes to the administration. Opposition leader Tzipi Livni placed herself squarely in the Obama camp this week during her confrontation with Netanyahu at the Knesset. Belittling the results of last month's Gallup poll which showed that Israel enjoys the support of two-thirds of Americans, (and 80 percent of Republicans vs. 53 percent of Democrats), Livni blamed the premier for Israel's international standing. By not bowing to Obama's demands and ending all Jewish construction in Jerusalem and accepting the radical peace proposals she and former prime minister Ehud Olmert made to the Palestinians during their tenure in office, Livni claimed that Netanyahu is ruining Israel's diplomatic position in the US and throughout the world.

There is nothing new or surprising about Livni's use of the Obama administration's animosity towards the government as a means of positioning herself as an alternative to the government. And on the surface it makes sense for her to use it. After all, it was by building a partnership with the Clinton administration against Netanyahu the last time he was in power that the Israeli Left was able to bring down his government and win the 1999 elections.

The Left's hope of forming a coalition with Obama against Netanyahu was given its most explicit expression last July in an op-ed by Ha'aretz's editor-at-large Aluf Benn in the New York Times. After expressing his support for Obama's policies, Benn bemoaned the fact that due to Obama's low approval ratings among Israeli Jews, (at the time they stood at 6 percent and later plunged to 4 percent), it would be hard for him to convince the Israeli public to abandon its support for Netanyahu in favor of Obama's - that is the Israeli Left's - policies. To improve this dismal state of affairs, Benn suggested that Obama simply needs to make his case to the Israeli public, which "will surely listen," to him.

As far as Benn - and his fellow leftists were concerned - Obama's credibility problems redounded not to his policies, which the Left supports. Instead they owed to his failure to dazzle the Israeli people with the same rhetorical magic he used on the Arabs and the Europeans. It was Obama's tone, not his programs that needed to be improved.

In arguing thus, Benn, like Livni and their colleagues on the Left are acting on their memories of their glory days with the Clinton administration. As president, Bill Clinton was able to simultaneously embrace Yassir Arafat, and take down Netanyahu without anyone ever questioning his undying love for Israel and the Jews. And because of this, he became the hero of the Israeli Left which he swept back into power in 1999.

As the Left sees it, Clinton retained his reputation as the greatest friend Israel ever had in the White House, despite the fact that his policies were the most hostile policies the US had ever adopted towards Israel, because he knew how to charm the Israeli electorate. His frequent visits to Israel and his saccharine, lip-biting declarations of love for Rabin and Israel were all it took in their view to convince the public to reject the Right. If Obama would just repeat Clinton's practices, he too could bring down Netanyahu and convince the Israeli public to trust him.

When Benn's article was published his recommendation was shrugged off by the administration. So too, the White House rejected repeated requests from the local media for interviews with the President. Now however, with Obama's approval rates slipping and his Iran policy in tatters, the White House apparently decided that it needs to embark on a charm offensive in Israel to make Netanyahu more vulnerable to coercion.

Biden was selected as the man for the job because he is widely perceived as the most pro-Israel senior member of the administration. The fact that before becoming Vice President Biden had one of the most pro-Iran voting records in the Senate has done nothing to mitigate this perception. Indeed, despite the fact that Biden voted repeatedly against sanctions on Iran, claimed that Iran's quest for nuclear bombs was understandable and called for the US to sign a non-aggression pact with the mullocracy while threatening to move for George W. Bush's impeachment if he were to order a military strike against Iran's nuclear weapons programs, Biden continues to be viewed as a solid supporter of Israel.

And indeed, in line with this perception, he can be expected to declare his undying love for the Jewish state several times during his speech. Yet still, and sadly for the Israeli Left and for the Obama administration, his charm offensive will fail to get the girl. The most his visit is likely to yield is a momentary rise in support among Israelis that will quickly recede. And there are four reasons this is the case.

First, Obama himself is far weaker than Clinton was. His obsequious attempts to curry favor with the Arabs and Iran have been even more disturbing to Israelis than his refusal to visit the country. Moreover, unlike Clinton, who was popular with Israelis even before he was elected, Obama has never been popular in Israel. Part of this can perhaps be chalked up to timing. Clinton of course succeeded George H.W. Bush who was deeply unpopular in Israel. Obama replaced his son - who was regarded as a great friend of Israel.

Given Obama's weakness, it is hard to see how he can convince the Israeli public that he will be capable of protecting the country from a nuclear-armed Iran or that he can force the Palestinians and the Syrians to end their support of terror in the event of an Israeli withdrawal from Judea and Samaria or the Golan Heights.

Second, the Netanyahu Obama faces is not the Netanyahu Clinton faced in the 1990s. Today the premier leads a far broader coalition than he did in his previous government. It is also more stable. Labor Party chief Defense Minister Ehud Barak knows he cannot unseat Netanyahu. Indeed, he knows he can't even trust his party to continue supporting him if he leaves Netanyahu's government. As for opposition leader Tzipi Livni, the latest polls show her trailing far behind Netanyahu as the people's choice for prime minister. Her party's popularity rates are decreasing, Likud's are growing.

Third, there is the fact that today the Left does not control public opinion to the degree it did the last time Netanyahu was in power. During his first government, due in large part to the media's delegitimization of the Right in the wake of Rabin's assassination, the media was able to market the PLO as a credible peace partner for Israel. Yassir Arafat himself was portrayed by a popular television show as a sweet, peace loving sock puppet who only wanted to make peace with the craven, war mongering Netanyahu. Consequently it became socially unacceptable in polite circles for Israelis to admit that Arafat and the Palestinians were less than devoted to the notion of peaceful coexistence with Israel or that Netanyahu was right not to give up the store. So too, it was socially unacceptable in certain quarters to criticize Clinton who presented himself as Rabin's greatest friend. Today, people are far less embarrassed to make these claims.

This is the case of course, for the fourth reason that Biden will fail in his mission. In the 11 years since Netanyahu was forced from office, the Left's political platform has been discredited by events. Since 1999 the Palestinians - as well as the Lebanese - have demonstrated that the Left's appeasement policies are disastrous. The 1,500 Israelis who have been killed since then by the Palestinians and Hizbullah, the transformation of post-Israeli withdrawal southern Lebanon and Gaza into jihadist enclaves, the rise of Iran, and Fatah's open rejection of Israel's right to exist have all made the Left's policies unacceptable to a wide majority of Israelis.

The public's rejection of the Left's policies is so overwhelming that it has even rejected the Left's current central claim - namely that Israel will lose its Jewish majority if it abstains from surrendering Judea and Samaria. By a 53-28 percent margin, a Ha'aretz poll last month showed that Israelis do not believe that Israel's continued presence in the areas will lead to the destruction of Israel as a Jewish state.

What all of this shows of course is that it will take much more than a change in tone for the Obama administration to win over the Israeli public. Indeed, Obama's open hostility towards Netanyahu has probably been a significant factor in shoring up the public's approval of his performance in office.