Ark of the Covenant: An Earthly Symbol

In the previous installment of this "Ark of the Covenant" series, we looked at one of the many suspect discoveries claiming the Ark found. Today, we'll look at the origins of the Ark and who it really symbolizes.

The Bible and the Ark

The origin of the Ark is to be found in Exodus 25:10-22. God ordered Moses to build the Ark to house the tablets of stone on which He had written the Ten Commandments. The Ark was a box approximately 4 feet long, 2 1/2 feet wide, and 2 1/2 feet high. It was made of acacia wood and was overlaid with gold inside and out. 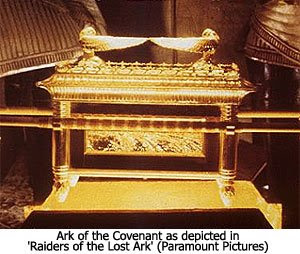 The lid that covered the box was called the "mercy seat." It was made of pure gold. Two gold cherubim were mounted on the lid, one on each end. The cherubim faced each other, and their wings were spread out toward each other, overshadowing the mercy seat.

According to Hebrews 9:4, two other items were later added to the contents of the Ark. One of these was a pot of manna, the miraculous food that God supplied the children of Israel in the wilderness (Exodus 16). The other item was Aaron's rod that budded (Numbers 17). And according to Deuteronomy 31:24-26, the Ark also contained the Pentateuch of Moses (the first five books of the Hebrew Scriptures.)

Later, these additional items must have been removed from the Ark, because when the Temple of Solomon was dedicated, the Ark contained only the tablets of stone with the ten commandments engraved upon them (2 Chronicles 5:7-10).

The Ark was housed in the Holy of Holies, the innermost chamber of the Temple. Once a year, on the Day of Atonement, the High Priest entered that Holy of Holies and sprinkled blood on the mercy seat to atone for his sins and the sins of the nation of Israel (Leviticus 16 and Hebrews 9). Because God had promised Moses that He would commune with Israel "from above the mercy seat" (Exodus 25:22), the concept developed that the Lord of Hosts was enthroned on the cherubim of the Ark (see 1 Samuel 4:4 and Isaiah 37:16).

The Symbolism of the Ark

Much has been made of the symbolism of the Ark, and rightfully so. Suffice it to say that every aspect of the Ark pointed to Jesus.

The acacia wood symbolized our Lord's humanity. The gold overlay denoted His deity. The Ten Commandments and the Pentateuch inside the Ark pictured Jesus with the Law of God in His heart, living in perfect obedience to it. The pot of manna spoke of Jesus as the Bread of Life or our life sustainer. Aaron's rod that budded obviously prophesied the resurrection.

The mercy seat was also a symbol that pointed to the Messiah. It was representative of the fact that the work of Jesus on the Cross would cover the Law of God with His mercy, making it possible for those who put their faith in Jesus to be reconciled to God. It is an illustration of how the divine throne was transformed from a throne of judgment into a throne of grace by the atoning blood that was sprinkled on it.

In the next installment of this series on the Ark of the Covenant, we'll be looking at its history in the Bible.

Ark of the Covenant: A Suspect Discovery - BPB (David Reagan)

Where is the Ark of the Covenant? - Zola Levitt Ministries (Thomas S. McCall)

What happened to the Ark of the Covenant? - GotQuestions.org

Search for the Ark of the Covenant - BASE Institute

Search for the Ark of the Covenant - Bob Cornuke (DVD)