Most discussions of health care are like something out of "Alice in Wonderland."

What is the biggest complaint about the current medical care situation? "It costs too much." Yet one looks in vain for anything in the pending legislation that will lower those costs. 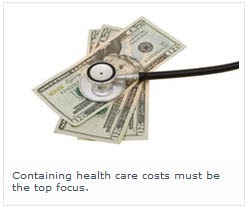 Back when the "single payer" was the patient, people were more selective in what they spent their own money on. You went to a doctor when you had a broken leg but not necessarily every time you had the sniffles or a skin rash. But, when someone else is paying, that is when medical care gets over-used – and bureaucratic rationing is then imposed, to replace self-rationing.

Money is just one of the costs of people seeking more medical care than they would if they were paying for it with their own money. Both waiting lines and waiting lists grow longer when people with sniffles and minor skin rashes take up the time of doctors, while people with cancer are waiting.

In country after country, the original estimates of government medical care costs almost always turn out to be gross under-estimates of what it ultimately turns out to cost.

Even when the estimates are done honestly, they are based on how much medical care people use when they are paying for it themselves. But having someone else pay for medical care virtually guarantees that a lot more of it will be used.

Nothing would lower costs more than having each patient pay those costs. And nothing is less likely to happen.

One of the big costs that have actually forced some hospitals to close is the federal mandate that hospitals treat everyone who comes to an emergency room, whether they pay or not. But those who talk about "bringing down the cost of medical care" are not about to repeal that mandate. Often they want to add more mandates.

The most fundamental issue is not whether treating everyone who comes to an emergency room is a good policy or a bad policy in itself. If it is a good policy, then the federal government should pay for what it wants done, not force other institutions to pay for it. Then let the voters decide at the next election whether that is what they want their tax money spent for.

Confusion between costs and prices add to the "Alice in Wonderland" sense of unreality.

Virtually everything that is proposed by those who are talking about bringing down the costs of medical care will in fact raise those costs. Mandates on insurance companies? Why are insurance companies not already doing those things that new mandates would require? Because those things raise costs by an amount that people are unwilling to pay to get those benefits.

It is a great political game, but it does nothing to lower medical costs.

Politicians who want a government monopoly on health insurance can easily get it, just by making it impossible for private insurance companies to charge enough to cover the costs mandated by politicians. The "public option" will then be the only option – which is to say, we will no longer have any real option.