Tehran threatens to stun world on anniversary of revolution

The Iranian supreme leader's promised "punch" that would stun the world to mark the 31st anniversary of the country's Islamic revolution tomorrow could be the unveiling of an air defense system supplied by Russia, according to a report from Joseph Farah's G2 Bulletin.

The Russians have been threatening to provide Iran with its advanced S-300 surface-to-air system capable of knocking down Israeli and U.S. warplanes. 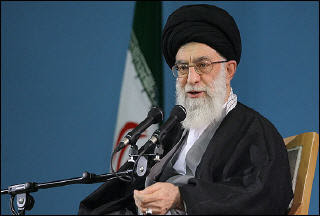 The Islamic website Kavkaz Center also has quoted an Iranian air force commander who affirmed an air defense system as powerful as Russia's, "or even stronger," was being developed.

According to Iranian Defense Minister Ahmad Vahidi, Iran has opened two production lines of unmanned drones capable of carrying out "surveillance, detection and even assaults with high precision."

Last year, the U.S. shot down an Iranian drone that had wandered deep into Iraqi airspace for more than an hour. In November 2006, an Iranian UAV flew over a U.S. aircraft carrier in the Persian Gulf without being detected.

"The Iranian nation, with its unity and God's grace, will punch the arrogance (of Western powers) on the 22nd of Bahman (Feb 11) in a way that will leave them stunned," Khamenei declared Monday.

He made the announcement before a gathering of Iranian air force officers. The event recalled the support the air force gave to the late Iranian revolutionary leader Ayatollah Ruhollah Khomeini that led to the overthrow of the U.S.-backed Shah Feb 11, 1979.

Khamenei's warning of a "punch" comes as the United Nations prepares to consider increased sanctions against Tehran for continuing its uranium enrichment program despite demands from the West to cease and desist.

Iran defiantly announced it would increase uranium enrichment to 20-percent levels for medical equipment and would add another 10 nuclear sites. The West regards Iran's program as a cover to make nuclear bombs.

Air Force Commander Heshmatollah Kassiri has stated the development of an air defense system has been under way, according to the Islamic website Kavkaz Center.

"In the near future, a new, locally made air defense system will be unveiled by the country's experts and scientists which is as powerful as the S-300 missile defense system, or even stronger," he said.

Since 2005, Russia has helped provide Iran with its air defense systems, delivering TOR-M1 missiles despite U.S. and Israeli protests.

To give Moscow plausible deniability, Russia may have transferred the advanced S-300 technology to Iran rather than supplying it outright.

Russian missile technology assistance to Iran goes back to the mid-1990s.