Members of the Business Roundtable - a group of America's business leaders - received a clear object lesson in the Marxist Hegelian Dialectic from the man who occupies the Oval Office. Dialectic was perfected by communist Karl Marx to get people to accept communism. Hegelian Dialectic was perfected by Georg Hegel, a disciple of Marxism. Ideas are presented in three stages. The first stage is the thesis, which causes a reaction from the listener. The second stage is the antithesis, which creates confusion in the listener, and the third stage is synthesis, which presents the alternative, more logical resolution of tension between the thesis and antithesis. This method is also used in the public school system. 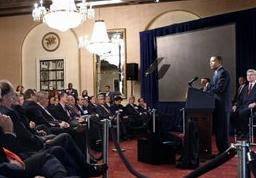 At the Business Roundtable, the thesis was that the man in the White House is not a socialist and does not support socialist policies. His antithesis is a post-modern recounting of a historic government role in establishing regulations, infrastructure and military protection so that Americans can have jobs and live freely. The synthesis is that the government must borrow money, take over the financial, auto and healthcare industries, provide jobs, limit executive salaries in private industry, and conduct the research to provide jobs in the future. In other words, he said he wasn't a socialist. He gave his version of government's historic role. He then made acceptance of socialism sound reasonable.

Here's how it went down: He first said, "Now, contrary to the claims of some of my critics and some of the editorial pages, I am an ardent believer in the free market." Then he said, "...we've arrived at a juncture in our politics where reasonable efforts to update our regulations, or make basic investments in our future, are too often greeted with cries of 'government takeover' or even 'socialism.'" And finally he rattled off his synthesis of socialism. He said the only way we are going to get through the challenges we face is "if we align the interests of workers and business and government around a common purpose."

He's got it backwards. Free market means the government interest is getting out of the way of workers and business by fostering regulated, but open competition. So the man who occupies the White House believes that socialism is the route to go. And he is trying to convince Americans to support his policies by saying that they are not socialism and that they are reasonable according to an American history twisted to suit his argument.

James 1:8 says, "A double minded man is unstable in all his ways." The Hegelian Dialectic is designed to take advantage of such double mindedness by creating a mental crisis and presenting a reasonable solution. Do not be deceived by a smooth tongue and eloquent reasoning.

Business By The Book: Complete Guide of Biblical Principles for the Workplace - Larry Burkett (Book)