US President Barack Obama is an inept, incompetent leader. More than his failure to pass his domestic agenda on health care and global warming despite his Democratic Party's control over both houses of Congress, Iran's announcement on Thursday that it is a nuclear power and has the capacity to produce weapons-grade uranium is a testament to Obama's feckless incompetence. Even his most ardent supporters are admitting this.

Take The New York Times. In a news analysis Thursday of Obama's failure to prevent Iran from advancing with its nuclear program, David Sanger wrote that for the US president, the last year has been "a year in which little in his dealings with Iran has gone the way that the White House expected."

Since Obama first announced his wish to sit down with Mahmoud Ahmadinejad, at a Democratic presidential candidates' debate in the spring of 2008, the 44th US president's only strategy for dealing with Iran has been to appease its leaders. And as of Tuesday, he still believes that ingratiating himself with the regime is his best bet.

At his press conference Tuesday, Obama wouldn't admit that appeasement has failed, even as all of Iran's top leaders said they were expanding their illicit uranium enrichment activities. The most he would do was acknowledge that the regime's leaders "have made their choice so far, although the door is still open."

As for sanctions, well, Obama said it will take "several weeks" to put those together at the UN.

The distressing truth is that Obama's aim has never been to prevent Teheran from acquiring a nuclear weapon. His whole "sanctions-if-engagement-fails" strategy is just a ruse. The Obama administration has never intended to place serious sanctions on Iran. As one senior administration official told The New York Times, the purpose of the sanctions talk is to get the Iranians to agree to negotiate. As he put it, "This is about driving them back to negotiations, because the real goal here is to avoid war."

US Presidents have a far freer hand in foreign policy than they have in domestic affairs. A president's ability to implement his domestic agenda is constrained by Congress. Congress has much less of a say in foreign policy. But the main constraining factor for a US president in both domestic and foreign affairs is public opinion.

Over the past year, Obama failed to pass his domestic agenda even though he enjoyed governing majorities in both houses of Congress, because the public opposed his agenda. So, too, if the public is able to express its opposition to his foreign policy, particularly as it relates to Israel and Iran, he will be unable to sustain it.

To date, in light of his sinking approval ratings, the main thing Obama has had going for him is that since the presidential election, his political opponents have lacked a leader capable of uniting his opponents around an alternative path. Over the past week, that leader may have emerged. 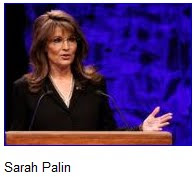 On Saturday, former Alaska governor and Republican vice presidential nominee Sarah Palin gave the keynote address at the Tea Party Movement convention in Nashville, Tennessee. As she did in the presidential campaign, Palin electrified her audience in Nashville by credibly channeling the populist impulses of American voters. In her signature line she asked, "So how's that hopey changey stuff working out for ya?"

Palin excoriated Obama on his handling of US foreign policy. Among other things, she noted that a year into his quest to appease dictators, America's international standing is in shambles. "Israel, a friend and a critical ally, now questions the strength of our support," she added.

Palin bellowed that on issues of foreign policy, there is no room for self-delusion. As she put it, "National security, that's the one place where you've got to call it like it is." And then, "We need a foreign policy that distinguishes America's friends from her enemies and recognizes the true nature of the threats that we face."

If her address wasn't enough to convince Americans - and specifically American Jews - that Palin thinks supporting Israel and standing up to Iran are the keys to US national security, then there was her interview on Fox News Sunday. Asked how Obama can win reelection in 2012, Palin responded, "Say he decided to declare war on Iran or decided really to come out and do whatever he could to support Israel, which I would like him to do."

And if that still isn't enough, there is her lapel pin. The politician who leads the populist opposition to Obama decided to make her most important speech since the 2008 election wearing a pin featuring the US flag and the Israeli flag.

Unlike Obama's empty protestations of support for Israel, Palin's support is obviously heartfelt and therefore will not diminish while Obama remains in office. And as Palin becomes stronger, her ability to influence the US debate in a manner that constrains Obama's freedom to intimidate Israel into allowing Iran to become a nuclear power will rise.

Disturbingly, in spite of Palin's extraordinary support for Israel, the American Jewish community overwhelmingly rejects her. As Jennifer Rubin noted in her article, "Why Jews hate Palin," in Commentary magazine, Jews disapproved of Sen. John McCain's choice of Palin as his running-mate by a 54 to 37 percent majority. The sneering broadsides published against Palin by leading American Jewish writers are legion.

In her article, Rubin gives a number of reasons for American Jews' rejection of Palin.

On the one hand, American Jews, who overwhelmingly self-identify as Democrats and disproportionately identify as liberals, oppose Palin for the same reason they oppose all social-conservative Republicans - because she isn't a liberal Democrat. What makes American Jews' rejection of Palin unique is its emotional potency. Rubin argues that the visceral hatred that many American Jews express towards Palin is effectively an issue of class hatred, or snobbery. They are four generations removed from the sweatshops where their great grandparents labored on New York's Lower East Side. And they don't like this woman with a funny accent who went to University of Idaho, guts fish and shoots moose.

This may be true. But if it is, American Jews might want to rethink their loyalty to their social class. As the demonstrations against Ambassador Michael Oren at UC Irvine, against former prime minister Ehud Olmert at University of Chicago, against Deputy Foreign Minister Danny Ayalon at Oxford, as well as the disinvitation of Prof. Benny Morris at Cambridge and the celebrity of Harvard's anti-Semitic Prof. Steve Walt show clearly, the bastions of intellectual elitism where American Jews feel most at home have become the repositories of the most virulent hatred of Jews in America and the West today. Liberal standard bearers like Hollywood have had no compunction about giving prestigious awards to movies like Paradise Now, which glorified murderers of Jews in a manner unmatched since the days of Leni Riefenstahl. Elite media outlets like The Atlantic Monthly are only too happy to publish the rantings of newly fashionable haters like Andrew Sullivan.

Liberal Democratic Jewish voices, like Leon Wieseltier at The New Republic, are aware that there is a problem with the rampant anti-Semitism in their camp. And they fear that as a consequence, American Jews may take a second look at Palin with her Israeli flag lapel pin. As Wieseltier wrote this week, "A day does not go by when I do not do my humble part to prevent such a transformation [of American Jewry from liberals to conservatives] from coming to pass."

The fact of the matter is that for Israel's sake such a transformation can't happen quickly enough. It isn't that American Jews have to change their social agenda, but they must recognize that today, sadly, there is not meaningful bipartisan support for Israel in the US Congress. The 54 lawmakers who wrote Obama a letter last month asking him to force Israel to open up Gaza's borders were all Democrats. Opposition to passing sanctions against Iran, and opposition to an Israeli strike on Iran's nuclear installations, are only politically significant among Democrats.

In her speech at the Tea Party Conference, Palin said, "We need a commander-in-chief, not a professor of law standing at the lectern."

The fact of the matter is that Obama came to many of his anti-Israel sensibilities through his professor friends - Rashid Khalidi, John Mearshimer, Samantha Power, William Ayres, Bernadine Dohrn and, of course, the late Edward Said. Americans interested in national security - and particularly American Jews who support Israel - should be the first ones to second Palin's statement.

Sarah Palin's emergence as the mouthpiece of populist opposition to Obama presents Israel's supporters - and particularly Israel's Jewish supporters - with an extraordinary opportunity and an extraordinary challenge. Palin's coupling of support for Israel with her populist domestic agenda marks the first time that support for Israel has been treated as a core, populist issue. The opportunity this presents for American Jews who care about Israel is without precedent.

But of course, to make the best use of this opportunity, American Jews who support Israel have to disappoint Wieseltier. They have to acknowledge that the Left has rejected their cause and increasingly, rejects them.

Obama's failure to prevent Iran from moving forward with its nuclear program, and his stubborn refusal to support an Israeli move to deny Iran the ability to threaten Israel and global security as a whole, place Israel and core US national security interests in unprecedented jeopardy. His fellow Democrats' willingness to support him as he maintains this perilous course means that the Democratic ship has abandoned Israel, and strategic sanity.

Palin's future in politics is unknowable. But what is clear enough is that today hers is the strongest single American voice opposing Obama's foreign policy and the loudest advocate for supporting Israel and denying Iran nuclear weapons. For this she deserves the thanks and support of American Jewry.

A Warning To The Tea Party Nation - Chuck Baldwin Live