It is, in my view, more than interesting that Rome and the European Union (EU) seek to bring Israel into their orbit on a formal basis. This is especially fascinating, considering that the world of nations in general is more and more marginalizing Israel because of the Jewish state's perceived guilt in the matter of being the chief obstacle to Mideast peace.

The prime minister of Italy - at the heart of which sits Rome, whose people destroyed the Jewish temple and Jerusalem in AD 70, and out of which the "prince that shall come" is prophesied to emerge - is courting Israel's government, as is reported within the following news excerpt:

JERUSALEM - Italian Prime Minister Silvio Berlusconi said Monday he hopes to bring Israel into the European Union, at the start of a three-day visit to the Jewish state... 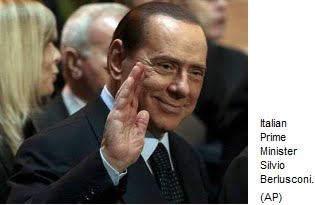 Under Berlusconi's leadership, Italy has become one of Israel's strongest allies in Europe. Berlusconi's efforts to strengthen ties with Israel followed decades of a pro-Arab tilt by previous Italian governments...

Speaking on arrival in Israel, Berlusconi told [Israeli Prime Minister Benjamin] Netanyahu that "my greatest desire, as long as I am a protagonist in politics, is to bring Israel into membership of the European Union." (Aron Heller, "Berlusconi: Bring Israel into the EU," MiamiHerald.com, 1/2/10)

The fascination ratchets up when one considers the collateral dynamics making the linkage Berlusconi seeks understandable.

Europe for the most part is at the mercy of Russia and others to their east for keeping oil and natural gas flowing their way. In that regard, the EU is truly vulnerable to pressures from those regions that act sometimes less than civilized by middle European standards. EU leadership would desperately like to have a source of natural gas, for example, that would assure at least a modicum of independence from Russia and the natural gas producing nations in its orbit over which Russia can exert hegemony.

Another interesting news item perhaps further illustrates the point of Israel's growing attractiveness to the courting Berlusconi and his EU colleagues:

The Canadian Bontan Oil and Gas Company, which has been exploring for natural gas off the coast of Israel, announced Tuesday that it had found prospective resources of up to 6 trillion cubic feet [TCF]of natural gas in Mira and Sarah Prospects off the country's coast.

As defined on the company's website, prospective resources are "those quantities of petroleum estimated, as of a given date, to be potentially recoverable from undiscovered accumulations by application of future development projects."

The two finds could be worth upwards of US $6 billion. ("Prospective Resources off Israel's Coast Could Be up to 6 Trillion Cubic Feet," Jerusalem Post, 2/2/10)

Some students of Bible prophecy have long speculated about the possibility of vast quantities of oil and gas perhaps one day being discovered in the small geographical area covered by modern Israel. There seems to be some indications due to recent exploration that the possibility exists. It seems, to me at least, that the Italian prime minister and others from the region out of which Antichrist is foretold to come might be thinking along the same lines.

Certainly, there is to be something that puts hooks in the jaws of Gog, the leader of the coalition of Ezekiel chapters 38 and 39. The western powers, as well as the Saudis and others of the region surrounding Israel, it seems, will send a diplomatic note of protest to the Russian leader, asking if he is coming to take "great spoil" from the area occupied by God's chosen people.

The attack, of course, will be satanically inspired, but it is logical to at least ponder whether it will be oil and natural gas that might be the geophysical "hook" that causes Gog and his Persian and other partners to think the "evil thought" foretold by the prophet Ezekiel. Israel's being brought into the EU realm by the leaders of the region prophesied to produce Antichrist would certainly be a spectacular stage-setting ingredient to the prophetic puzzle. The "beast" would, when coming to power, have legitimate claim to all that is Israel's, from the earthly perspective, if Israel were a member of the EU - and if, as many of us suspect, the EU is indeed the nucleus of Antichrist's future kingdom.

According to Daniel the prophet, Antichrist will at least for a time cause great industrial productivity that promises security. This will all quickly turn to hell on earth, of course, as Antichrist's luciferian rage and God's wrathful judgment begins. Antichrist will need, most likely, control of the oil and gas sources in order to "cause craft to prosper" (Dan 8: 25).

The attempts of the leadership of the EU to bring Israel into its sphere of influence by making it a member is a matter to watch.