And ye shall hear of wars and rumours of wars: see that ye be not troubled: for all [these things] must come to pass, but the end is not yet (Matthew 24:6).

The burden of Damascus. Behold, Damascus is taken away from [being] a city, and it shall be a ruinous heap (Isaiah 17:1).

A quick real estate tip if you're thinking of investing in any Middle East properties: Don't sink any cash into Damascus as it may well be on its way out, potentially very soon.

Tensions between Israel and Syria are presently sky high as a result of Syrian president Bashar Assad announcing this week that Israel is avoiding peace, his comments following on the heels of Syria's foreign minister saying Israeli cities will be attacked in a future war between the two nations. 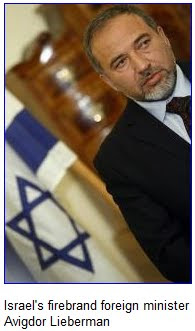 Responding to all the saber rattling coming out of Damascus, Israeli Foreign Minister Avigdor Lieberman yesterday said Syria has "crossed a red line that cannot be ignored", adding that any future war will not only result in defeat for Syria but the removal of Assad and his family from power as well.

I've heard it said before, in relation to marriage, that couples should never allow the word divorce to be spoken in the heat of a dispute as even the mention of it plants a seed of insecurity within both parties, seeds having a tendency to grow, sometimes wildly fast. The same, I believe, is true where threats of war are concerned, even if they're somewhat veiled.

The history of Israeli-Syrian relations is overflowing with conflict, both direct and by proxy on the part of Syria. Given that is true, especially at this time when Israel is already feeling threatened - and rightly so - by Tehran's nuclear weapons program, Syria has selected the worst imaginable moment to "cross a red line" with Israel.

The prophet Isaiah tells us that Damascus is living on borrowed time and from where I'm sitting? There doesn't seem to be a lot of sand left in the upper half of the hour glass. Many lost souls hang in the balance if things should go wrong and we can be more than certain, based on Isaiah's prophecy, they're going to sooner or later. Like it or not, believe it or not, Damascus is going to be removed from existence at some point in the future. Hundreds of thousands, in all likelihood, will die when fulfillment of Isaiah's prophecy occurs. If that disturbing truth doesn't motivate us to pray, both for the lost in Israel and Syria, nothing will.

In closing, a request from me to my readers. After reading these final words, please take a moment to pray for the lost in Syria, Israel and all over the world for that matter. As recent events in Haiti and Indonesia (the tsunami event of 2006) reflect, hundreds of thousands of souls can enter into eternity, with or without Jesus Christ as Lord and Savior, on any given day. We need to care about that - and deeply.

For God so loved the world, that he gave his only begotten Son, that whosoever believeth in him should not perish, but have everlasting life (John 3:16).