The New Israel Fund and the Next War

A regional war may well be approaching. The actions and statements of Iran and its Syrian, Lebanese and Palestinian proxies over the past week or so indicate that this is what Israel's enemies are gunning for.

In preparing for this growing threat, Israel's leaders need to consider more than just the military challenges it faces. They must consider the political actors at home and abroad that limit the IDF's ability to fight to victory and develop strategies for neutralizing those actors.

The latest developments are menacing. Last Saturday, Iran's unelected president Mahmoud Ahmadinejad threatened to open up a new round of hostilities on February 11. Then Wednesday, Iran launched a new missile into space. Israeli and US missile experts claim that the missile launch signals that Iran is developing intercontinental ballistic missiles and building the capacity to launch nuclear warheads on ballistic missiles.

Following the missile launch, Syria's president and foreign minister issued incendiary comments threatening Israel with war. Notably, they did so the same day the US informed Syria of its intention to send an ambassador to Damascus for the first time in five years. 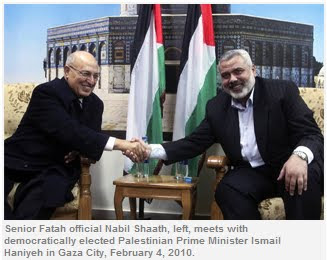 Hamas, for its part, sent barrels of explosives drifting to the Israeli coastline - exposing new ways it can kill us. And Fatah, for its part, decided to kiss Hamas's ring this week. Senior Fatah official Nabil Shaath's obsequious visit to Gaza Wednesday was a graphic demonstration of Hamas's preeminence in Palestinian society.

Then there is Hizbullah. In a speech on January 15, Hizbullah leader Hassan Nasrallah pledged that the next war will "change the face of the region."

And if the precedent of former MK Azmi Bishara - who fled Israel after learning that he was about to be indicted for serving as a Hizbullah agent in the 2006 war - is any indication of Hizbullah's modus operandi, Israel may also face Israeli Arab fifth columnists assisting Hizbullah forces inside the country.

Assuming for the moment that the IDF and the government are prepared to contend with these mounting military threats, Prime Minister Binyamin Netanyahu and his colleagues must take the necessary steps to withstand and minimize the effectiveness of the far left's expected political warfare against Israel. As the past decade has made clear, the aim of that warfare is to delegitimize Israel's right to defend itself in order to make it impossible for Israel to pursue the war to military and political victory.

As in the military arena, so in the political arena, Israel's foes have grown from nuisances into strategic threats over the past decade. The UN-sponsored Goldstone Report, which effectively denies Israel's right to defend itself and criminalizes its military efforts to secure its citizenry and its territory, is evidence of the gravity of the threat Israel faces as our leaders plan for the coming war.

On this latter plane, the past week has been an eventful and hopeful one. The latest developments offer guidance for how the government must proceed as the winds of war blow ever stronger. Late last week, the Zionist student movement Im Tirzu published a detailed report demonstrating that 16 anti-Zionist NGOs funded by the post-Zionist New Israel Fund worked hand in glove with the UN Human Rights Council and Richard Goldstone to bring about the establishment of the Goldstone committee and give credibility to its allegations that Israel committed war crimes during Operation Cast Lead. According to the Im Tirtzu report, 92 percent of Israeli allegations that Israel committed war crimes in its campaign against Hamas came from these 16 NIF-funded organizations.

Im Tirtzu's report was prominently covered by Ma'ariv last weekend. The media coverage provoked calls in the Knesset this week to investigate the NIF and its operational arms in Israel, both through regular committee hearings and perhaps through a parliamentary investigative panel.

These calls are extraordinary because they represent the first time in a decade that the legitimacy of these NGOs has been seriously scrutinized.

Since the Palestinians began their terror war against Israel in September 2000, NIF-sponsored groups have worked steadily to intimidate political leaders, law enforcement officials and military commanders to toe their anti-Zionist line. In the wake of the PLO-incited riots in the Israeli Arab sector in October 2000, the overtly anti-Zionist NIF-funded Adalah group agitated for the formation of the Orr Commission. Charged with investigating the police who quelled the rioting rather than the rioters whose violence forced the prolonged closure of major highways to Jewish traffic throughout the country, the Orr Commission had a devastating impact on the police's morale and organizational culture.

Adalah successfully cowed the Barak government into agreeing to rules of inquiry for the commission that denied police officers even minimal rights of due process. They were not allowed to confront or question their accusers. In the aftermath of the commission's public hearings - which amounted to little more than show trials - the careers of several dedicated officers were destroyed. As a consequence, police commanders began curtailing their law enforcement activities in Arab villages. Everything from illegal building to livestock theft to incitement to war against Israel has gone uninvestigated and unpunished.

Furthermore, the Adalah-instigated and orchestrated Orr Commission empowered the most radical voices in Israeli Arab society. Supported by Arab political leaders, Adalah published a manifesto calling for the destruction of Israel as a Jewish state. Bishara's suspected espionage for Hizbullah, and the legal establishment's self-evident fear of prosecuting him for treason, are also the direct consequence of the Orr Commission.

As for the IDF, NIF-funded organizations have played a key role in organizing the weekly riots at flashpoints like Ni'ilin and Bi'ilin and in the recent expansion of these riots to other places in Judea and Samaria like Neveh Tzuf. Supported by anti-Israel activists from Europe and the US, these riots have had a devastating impact on the IDF's morale and its ability to defend Israeli communities.

The NIF-funded pro-Palestinian group B'Tselem provides the rioters with video cameras with which they regularly shoot distorted footage. Their canned films portray Israeli civilians seeking to defend themselves from the rioters as attackers. They portray IDF soldiers trying to keep order and protect Israeli civilians as violent bullies. B'Tselem gives these films to its supporters in the Israel media, which broadcast them as credible footage and demand that the IDF open investigations against its officers for carrying out lawful orders.

On the defensive, the IDF is compelled to curtail its operations and Israeli civilians, now demonized, are viewed as legitimate targets for terror attacks. One recent film of the rioting outside Neveh Tzuf posted on YouTube shows border policemen simply fleeing the scene and leaving the residents of the community to fend for themselves.

Im Tirtzu's offensive against the NIF sparked outraged protest among the NIF's supporters on the far left in Israel and in the US. Everyone from Ma'ariv's in-house anti-Zionist reporters Maya Bengal and Meirav David to J Street have piled on, attacking Im Tirtzu's financial backers and seeking to demonize the organization by referring to it as extremist, far right, racist, fascist, out-of-the-mainstream and all the other routine far-left terms used to demonize Zionists.

What is most encouraging about the aftershocks of the Im Tirtzu report is that the Left's attempts to demonize it have so far failed. Indeed, the loudest voices calling for an investigation of NIF and its sponsored organizations have been MKs from Kadima.

The harsh truth is that the main cause of Israel's poor performance in Cast Lead and the Second Lebanon War was the Olmert government's ideological dependence on the far left and its central contention that it is Israel's presence in contested areas rather than our enemies' commitment to Israel's destruction that causes wars. Owing to their allegiance to this falsehood, Ehud Olmert and Tzipi Livni were unable to prosecute the wars to victory militarily, justify the limited steps they did take to defend Israel diplomatically, or discredit the rising chorus of Israeli NGOs arguing that Israel had no right to defend itself politically.

Since Cast Lead, however, two important things have happened. First Kadima was replaced by the Likud. Prime Minister Binyamin Netanyahu rightly recognized the Goldstone Report as a strategic attack against Israel. If Israel has no right to defend itself; if its moves to do constitute war crimes, then Israel cannot fight, cannot win and will be destroyed. Rather than give credence to the report, Netanyahu has made discrediting it one his primary aims in office. And to counteract its force, among other things, for the first time since the start of the Oslo peace process with the PLO, Israel's government is asserting the Jewish people's right to Judea and Samaria.

Beyond that, Kadima itself has changed its tune. Now in the opposition, Kadima no longer needs to defend its rejected plan to unilaterally withdraw from Judea and Samaria. Mahmoud Abbas's refusal of Olmert's offers to withdraw Israelis civilians and military personnel from nearly all of Judea and Samaria and to cede sovereignty in Jerusalem discredited the notion that it is possible to make peace with the Palestinians. Most importantly, the fact that Goldstone castigates Livni and Olmert as war criminals requires Kadima to fight all forces - including the far left it previously supported - that give credibility to Goldstone.

These developments clear the way for the Netanyahu government to take steps to neutralize the potency of these groups. The government should move swiftly to order the police and the IDF to enforce the law against these groups and their allies. It must also provide the political support to police and military commanders in the field to empower them to fulfill their orders without fear that they will be persecuted for doing their jobs.

If the government seizes the opportunity to weaken these subversive groups, not only will it be making it clear that the political open season on Israel is over. It will be clearing the way for any future war to end not only in military victory, but in political victory for Israel as well.

Lieberman: Grave issues in the Mideast require a response - Ha'aretz