It seems observably true - to me, at least - that this generation stands on God's prophetic timeline very near the time Daniel the Old Testament prophet described, as recorded in the following:

And the fourth kingdom shall be strong as iron: forasmuch as iron breaketh in pieces and subdueth all things: and as iron that breaketh all these, shall it break in pieces and bruise. And whereas thou sawest the feet and toes, part of potters' clay, and part of iron, the kingdom shall be divided; but there shall be in it of the strength of the iron, forasmuch as thou sawest the iron mixed with miry clay. And as the toes of the feet were part of iron, and part of clay, so the kingdom shall be partly strong, and partly broken. And whereas thou sawest iron mixed with miry clay, they shall mingle themselves with the seed of men: but they shall not cleave one to another, even as iron is not mixed with clay. (Daniel 2:40-43)

Daniel was given by God both the dream-vision that Babylonian King Nebuchadnezzar had one troubling night and its interpretation. The dream was of a huge, metallic, man image. The image, Daniel interpreted, was of four world powers, and a final, fifth world power, which would come on the scene at the very end of human history just before God judged earth's rebellious governments. Then, the prophecy indicates, a new regime - headed by God himself - will rule and reign:

And in the days of these kings shall the God of heaven set up a kingdom, which shall never be destroyed: and the kingdom shall not be left to other people, but it shall break in pieces and consume all these kingdoms, and it shall stand for ever. (Daniel 2:44) 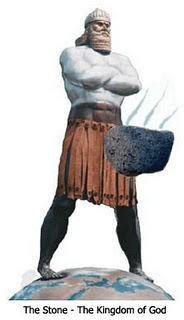 Daniel prophesied that the fifth world power will come out of the fourth. We know the order of world empires from history. The first Daniel interpreted, at the time he was giving the interpretation, was Babylon. The second would be the Medo-Persian. The third would be the Greek Empire, and the fourth would be the Roman Empire, represented in Nebuchadnezzar's night-vision by the legs of iron. The fifth empire - the final empire, and the only one that is yet to come into being as fulfilled prophecy - is represented by the feet and toes of that metallic monstrosity.

To my understanding, at least, the five world empires given to Daniel in metallic representations - i.e., gold for the head, silver for the breast and arms, brass or bronze for the belly and thighs, and iron for the legs, feet and toes - is indicative of money and the power to rule over the inhabitants of planet earth. Metals have most always been at the center of any economy throughout history. And when the metals represented the power to mold and construct weaponry - e.g., spears, bullets, bombs, warcraft like tanks, planes, ships, etc. - the power of the metal and the economies of the world powers become understandable. Money is power, and power is control. These are inextricably linked.

The fifth world power will come from the Roman Empire, which disintegrated but is reforming, we who observe prophecy from the pretrib view believe. We believe that the European Union is almost certainly the nucleus out of which this last Gentile power is emerging. This is the area of central Europe in particular. Rome is the very heart of that nucleus.

Daniel also prophesied about the last world empire's leader who would leap to center stage at just the right moment in Satan's plans to bring him to power:

And after threescore and two weeks shall Messiah be cut off, but not for himself: and the people of the prince that shall come shall destroy the city and the sanctuary; and the end thereof shall be with a flood, and unto the end of the war desolations are determined. And he shall confirm the covenant with many for one week: and in the midst of the week he shall cause the sacrifice and the oblation to cease, and for the overspreading of abominations he shall make it desolate, even until the consummation, and that determined shall be poured upon the desolate. (Daniel 9:26-27)

Antichrist, "the beast," as this vicious future tyrant is termed, will come to power and rule ruthlessly. His power will emanate from economics - the ability to call all to worship him through a mark and numbering system that will control buying and selling. (Read Revelation 13:16-18 to understand this 666 system of absolute control.)

We are witnessing economic rearrangements at present like no other generation has seen. Even the United States - as anyone with any sense of what's been going on in the news will attest - is being forced into a mold of one-world economic order. It is all leading toward the mark and numbering system that will give Antichrist his power. (Read Revelation 17:12-13 to learn of the ten economic power blocs that will develop, then give power and authority to the beast - Antichrist, the ruler of the fifth and final world empire.)

Europe today is in dynamic upheaval, struggling to stand on the feet and toes that will give the eventual Antichrist system its balance, its equilibrium. But just as Daniel the prophet foretold, the feet and toes are not made of purely a metal of strength. The EU is made partly of the governmental strength that was the ancient Roman Empire, but also is constructed of weakness intrinsic within the governments of contemporary times. This makes the whole structure that is the final form of all worldly economic-governmental power subject to crashing to final collapse. This is exactly what Daniel foresaw as given above in Daniel 2:44.

A story this past week gives, I believe, an excellent example of the struggle the reviving Roman Empire is unwittingly engaged in to construct that final world rule Satan seeks:

(STRASBOURG, France) - With the European Union's single currency in the grip of the worst crisis in its history, the bloc’s new president is expected to use the growing alarm over debt levels to argue for a new form of "economic government" in Europe.

The leaders [meet] on Thursday at a summit meeting in Brussels, now certain to be dominated by worries about deficit and debt levels in Greece.

[EU Commission president Herman] Van Rompuy’s proposal could take main responsibility for stewardship of economic coordination out of the hands of the 27 nations’ finance ministers, elevating it to the level of heads of government. The plan could also reduce the role of the European Commission, the bloc’s executive arm.

According to a draft of one of two documents circulated before the meeting, Mr. Van Rompuy (pronounced rom-PWEE) will argue that "recent developments in the euro area highlight the urgent need to strengthen our economic governance.

Whether it is called coordination of policies or economic government," it adds, "only the European Council is capable of delivering and sustaining a common European strategy for more growth and more jobs.

...Recommendations for the euro area as a whole and its member states should be strengthened, with a stronger focus on competitiveness and macroeconomic imbalances," the draft says. "This would be in line with the importance of economic spillover effects in the monetary union and the challenges the euro area is facing." (Stephen Castle, "European Debt Issues Top Agenda for Meeting," NYTimes.com, 2/9/10).

Paul the apostle wrote of the economic reality that drives the world toward God's judgment and wrath:

"But they that will be rich fall into temptation and a snare, and into many foolish and hurtful lusts, which drown men in destruction and perdition. For the love of money is the root of all evil" (1 Timothy 6:9-10a).

Certainly, the truth of God's Word frames what is happening at this time in history, and where it all is heading as the rulers of this fallen sphere grasp for the wealth of this world and strive to cast off the bonds of governance God wisely placed upon the would-be masters of planet earth.

Go to now, ye rich men, weep and howl for your miseries that shall come upon you. Your riches are corrupted, and your garments are motheaten. Your gold and silver is cankered; and the rust of them shall be a witness against you, and shall eat your flesh as it were fire. Ye have heaped treasure together for the last days. Behold, the hire of the labourers who have reaped down your fields, which is of you kept back by fraud, crieth: and the cries of them which have reaped are entered into the ears of the Lord of sabaoth. Ye have lived in pleasure on the earth, and been wanton; ye have nourished your hearts, as in a day of slaughter. Ye have condemned and killed the just; and he doth not resist you. (James 5:1-6)

We are in the end of the age era of the toes of Nebuchadnezzar's night-vision.