Outside of al-Qaida, the Iranian-backed Hezbollah has the distinction of having killed the most Americans in terror attacks. It is also responsible for scores of terrorist actions targeting Israelis, including rocket launchings against civilian population centers. Hezbollah's attacks against the Israeli north in 2006 killed 43 Israeli civilians and wounded more than 4,000. 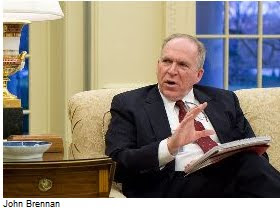 In a July 2008 article in The Annals, a publication of the American Academy of Political and Social Sciences, Brennan argued it "would not be foolhardy, however, for the United States to tolerate, and even to encourage, greater assimilation of Hezbollah into Lebanon's political system, a process that is subject to Iranian influence."

Continued Brennan: "Hezbollah is already represented in the Lebanese parliament and its members have previously served in the Lebanese cabinet, reflections of Hezbollah's interest in shaping Lebanon's political future from within government institutions. This political involvement is a far cry from Hezbollah's genesis as solely a terrorist organization dedicated to murder, kidnapping and violence."

Also, at a press conference in August at the Center for Strategic and International Studies in Washington, Brennan declared, "Hezbollah started out as purely a terrorist organization back in the early '80s and has evolved significantly over time. And now it has members of parliament, in the cabinet; there are lawyers, doctors, others who are part of the Hezbollah organization."

Maintenance of a civilian unit of doctors and lawyers by terrorist groups is not uncommon in the Middle East. Hamas has long brandished a civilian wing that provides medical care and education to the Palestinian population. According to Israeli security officials, Hezbollah and Hamas emphasize this outreach to endear their terror groups to the local population.

Brennan went on to state, "Quite frankly, I'm pleased to see that a lot of Hezbollah individuals are in fact renouncing that type of terrorism and violence and are trying to participate in the political process [in Lebanon] in a very legitimate fashion."

Hezbollah in 1983 carried out a massive attack on the American Marines barracks inside Lebanon in which suicide bombers detonated truck bombs, killing 241 American servicemen, representing the highest single-day death toll for the Marines since the Battle of Iwo Jima of World War II.

Brennan has come under fire the past few days after a video surfaced showing a question-and-answer session for Muslim law students last week at New York University.

At the session, Brennan stated that having a percentage of terrorists released by the U.S. return to terrorist attacks "isn't that bad," since the recidivism rate for inmates in the U.S. prison system is higher.

He also criticized parts of the Bush administration's response to 9/11 as a "reaction some people might say was over the top in some areas" that "in an overabundance of caution [we] implemented a number of security measures and activities that upon reflection now as we look back after the heat of the battle has died down a bit we say they were excessive, okay."

Brennan is also coming under fire for previous remarks he made about jihad.

"Nor does President Obama see this challenge as a fight against 'jihadists,'" said Brennan.

"Describing terrorists in this way – using a legitimate term, 'jihad,' meaning to purify oneself or to wage a holy struggle for a moral goal – risks giving these murderers the religious legitimacy they desperately seek but in no way deserve. Worse, it risks reinforcing the idea that the United States is somehow at war with Islam itself. And this is why President Obama has confronted this perception directly and forcefully in his speeches to Muslim audiences, declaring that America is not and never will be at war with Islam."

John Brennan and the Politics of Capitulation - FrontPage Magazine

If President Obama is up in the air over who to fire, I can offer some suggestions - New York Daily News