Another Watchman Falls off the Wall

Some funny business is going on at Focus on the Family. James Dobson is stepping down, ceding his microphone to new leadership. Mr. Dobson, a 73-year-old child psychologist, announced that he is going to launch a new radio show with his son in March. He said, "I cannot watch the world continue in a moral decline without offering guidance." 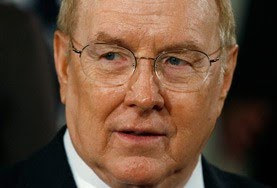 Founded in 1977 by Dobson, Focus on the Family has built an audience estimated at 1.5 million daily listeners in the U.S. and more than 200 million worldwide. Its mission is "nurturing and defending the God-ordained institution of the family and promoting biblical truths worldwide."

Jim Daly will be the guy taking the reins of the ministry. He is said to have a markedly different style and set of priorities. "I don't see evil behind everything," Mr. Daly said. He prefers to build bridges with others. While Mr. Dobson blasted President Barack Obama for "fruitcake" ideas, Daly praised the president for his devotion to family, and last summer attended a White House event celebrating fatherhood.

Focus leaders say they intend to join a growing movement in the evangelical community to broaden their agenda beyond abortion and gay marriage. Daly wants to adopt the bridge-building style of such evangelical leaders as pastors Rick Warren and Joel Hunter.

It's quite obvious to me that Dobson was forced out of his own ministry. He has been tight-lipped about his departure from Focus on the Family.

I see a repeat of the fiasco that NBC created when it replaced Jay Leno with Conan O'Brien. Only in this case, there isn't a multi-billion dollar parent company to cushion the financial blow. Focus on the Family's donor support has already been falling. Its budget for the current fiscal year is about $132 million, down from $151 million in the 2008 fiscal year. Now that Dobson is starting a new venture, he will likely drain away a large chunk of the ministry’s supporter base.

Several years ago, I wrote an article that pointed out that apologetics is dead. "In order to defend true Christianity against the encroachment of error, people must be active in finding the wolves who dwell amongst the flock," I said. "Sadly, ‘apologetics’ has become a dirty word. Few Christian leaders want to be the bad guys. They would rather make friends with the enemies so they won't lose out on financial opportunities that come with these alliances" ("Nearing Midnight," 9/27/04).

We are now at the point where it is time to declare that our nation has no moral watchmen. We still have some, but they are so small in number that they don't matter to the general population. Rapture Ready is proclaiming the true gospel message, but our effort only reaches the hundreds of thousands.

Most of the moral leaders of my youth are now dead or are too old to be of any service. We're left with preachers who write books that appeal to people’s carnal nature.

I can't think of a better example than Joel Osteen. He has the largest church in North America, he is the top-rated pastor on TV, and was named "Most Influential Christian in America" in 2006 by The Church Report. The Houston-based pastor refuses to mention the word "sin," and every one of his books has the word "you" or "your" in the title. A couple of years ago, Fox News Sunday host Chris Wallace brought up criticism of Osteen's lack of Scripture reference in his sermons, as well as his hesitancy to discuss sin as a common part of life. Osteen responded: "And I am ultimately trying to do that, but I'm trying to teach people how to live their everyday lives, and so do I focus on it? Probably not as much as some people would like."

It doesn't surprise me that Houston elected a gay mayor and Joel Osteen was the one giving the inauguration ceremony prayer. What shocked me is the silence in the church. I almost wish Osteen had said, "I'm here because God approves of homosexuality." Maybe that would have triggered a reaction that would let us know we haven't hit rock bottom yet.

One of the reasons I believe the tribulation hour is very near is that most people think there is room for a final warning. The lack of a moral watchman has given the false impression that everything is fine.

"Now the Spirit speaketh expressly, that in the latter times some (not all) shall depart from the faith, giving heed to seducing spirits, and doctrines of devils; Speaking lies in hypocrisy; having their conscience seared with a hot iron" (1 Tim. 4:1-2).

What is Christian apologetics? - GotQuestions.org